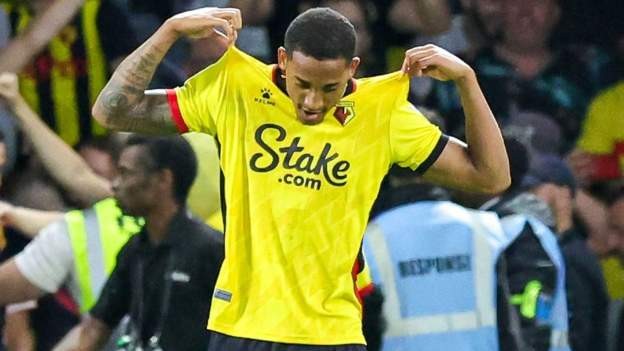 Rob Edwards made a winning start to life as Watford manager as Joao Pedro's goal proved enough to beat Sheffield United in a highly-competitive Championship game at Vicarage Road.

Pedro gave goalkeeper Wes Foderingham no chance from six yards when Ismaila Sarr squared the ball to him after a swift counter-attack following a Blades corner at the opposite end.

The Brazilian had come closest for Watford before the break with a header from Ken Sema's cross which forced Foderingham into a smart save.

United - beaten on penalties by Nottingham Forest in last season's play-offs after finishing fifth in the table - have now lost their opening league game in seven out of the past nine seasons.

Both sides have made four signings so far in the summer transfer window - but only one of them, Blades defender Ciaran Clark, started the game.

Boss Paul Heckingbottom was unable to call on Anel Ahmedhodzic after only finding out last week that the Bosnia defender was still subject to a one-game ban from his time with Swedish club Malmo.

Watford made an assertive start with Emmanuel Dennis, in particular, proving a handful for the United defence. He played in Sarr after an early foray down the left, but his fellow forward could only find the side netting.

Dennis scuffed an effort from the edge of the box after Sarr returned the favour. It took United took 20 minutes to produce their first meaningful effort on goal from Sander Berge, while John Fleck and Francisco Sierralta were booked following a clash involving several players.

In Iliman Ndiaye, the Blades had arguably the first half's most poised and skilful player, but he could have done better after holding off Hassane Kamara to take Daniel Jebbison's flick and his shot lacked power to seriously trouble Daniel Bachmann.

Following Pedro's headed effort, Bachmann was called into more serious action, having to adjust his feet quickly before tipping over a curling shot by Jebbison.

United were forced into a change after the break, with Max Lowe replacing the injured Enda Stevens as they waited to take a corner.

Lowe had only been on the pitch for a few seconds when Watford won the ball and broke upfield with Dennis feeding Sarr, who squared for Pedro to coolly slot in.

Reda Khadra, signed on loan from Brighton, was brought on for his debut and Billy Sharp replaced Ndiaye as Heckingbottom - who had been shown a yellow card for protesting after the goal - made four more changes to try to retrieve the situation.

They created very little, though, apart from John Egan's off-target header from Fleck's ball into the box. Watford substitute Rey Manaj - signed from Barcelona on a three-year deal - then forced Foderingham to keep out a low 20-yard drive.

Six minutes of added time gave United hope, but Watford comfortably ran down the clock to take all three points and the first step in their bid to return to the Premier League following last season's relegation.

"I'm delighted with the commitment and the spirit of the lads. We wanted to try and show an intensity in our play and I felt at times in the first half we had it.

"We definitely had it at the start of the second half and we got the goal - and I thought we showed a lot of resilience and calmness to protect it.

"We know we've got quality - but quality alone is not enough. You need to run, you need to fight and work for each other.

"I absolutely loved the feeling, the atmosphere. The supporters were brilliant as soon as I came out, so a massive thank you to them for making it a special night and I'm really pleased we were able to reward that with a win."

"We knew it was going to be a difficult place to come, but we stuck at it and had a good go and we're really disappointed to not take something out of it.

"Probably the only criticism - because the effort was there - is we were a little bit shot-shy and I would have liked to have seen us put the ball in the box a little bit more.

"They've got some good front players, we knew they'd be a threat on the counter, individually and together, they've got big moments in them.

"The goal was a big moment obviously and for five minutes or so after that we lost our composure - after that we regained it, but we didn't have enough at the other end."

Hassane Kamara (Watford) is shown the yellow card for a bad foul.

George Baldock (Sheffield United) wins a free kick in the defensive half.

Sander Berge (Sheffield United) is shown the yellow card for a bad foul.

Rey Manaj (Watford) wins a free kick in the defensive half.

John Egan (Sheffield United) wins a free kick in the defensive half.

Attempt saved. Rey Manaj (Watford) left footed shot from outside the box is saved in the bottom right corner. Assisted by Hassane Kamara.

Reda Khadra (Sheffield United) wins a free kick in the attacking half.