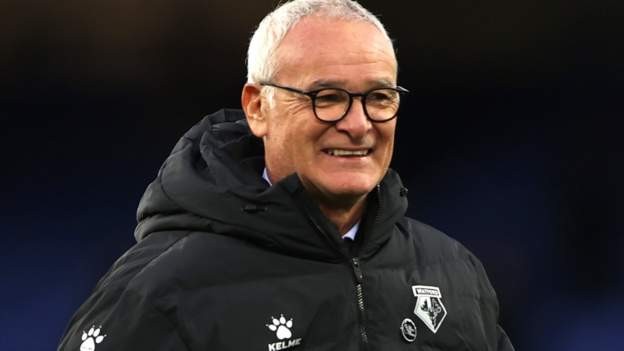 It's been an eventful return to the Premier League for Claudio Ranieri.

The popular Italian, who masterminded Leicester City's unlikely title win in 2015-16, was lured back to England by Watford after they sacked Xisco Munoz but his reign got off to a bad start when they were routed 5-0 by Liverpool in his first match in charge.

It looked like it was going to be two defeats out of two when they trailed 2-1 at Everton with 10 minutes remaining.

But the Hornets' stunning response, with four goals in 12 minutes to seal a 5-2 win that featured a hat-trick by Joshua King, suggests the 70-year-old's latest top-flight adventure could be very, very entertaining.

Ranieri's response to Everton taking a 2-1 lead, through a diving header from ex-Hornets striker Richarlison, was to bring on Emmanuel Dennis and Joao Pedro.

The attacking pair played a key role in the astonishing finale, with Dennis providing two assists before coolly slotting home his side's fifth having been set up by Pedro.

And rather than sit back and hope to claim a point after Juraj Kucka's headed equaliser, Watford were encouraged to for an unlikely win - the first in their history at Goodison Park.

"That's the Ranieri factor" said former Everton forward James McFadden on BBC Radio 5 live. "People looked at the result last week and asked 'what can he do'. Well today it shows you.

"They go behind and could have folded but they didn't - it was Everton who folded, actually. It was dreadful defending but you have to give Claudio Ranieri and Watford credit. They got themselves back in, took control of the game and were absolutely clinical at the end."

King, who failed to score in his brief spell with Everton this year, added "Even when Richarlison scored I had a feeling we would get something out of this game. When we scored the header the belief just grew in the team.

"This is a great group with togetherness. This is a team sport and sometimes I won't score, sometimes I will. The manager has just come in, his second game in, and that was a good performance by the team."

Ranieri had a big task on his hands to inject some belief into his players in the wake of his side's evisceration by Liverpool - and used the week's thrilling European action to do that.

"I just spoke with my heart and said 'It's OK, it could happen'. When Atletico Madrid lost 3-2 against Liverpool [in the Champions League on Tuesday], I talked to my players and said 'For me, Atletico Madrid is one of the best teams in the world [defensively] so if they can concede three to Liverpool, Watford can concede five'.

"But after this we have to fight for every duel, for every ball and second ball and I'm very, very pleased with our performance."

Everton's defeat, their second in a row on home turf, prompted some frustration from the home support. There were some boos when Anthony Gordon was replaced by Richarlison, although that move paid off when the Brazilian scored within three minutes.

BBC's Eilidh Barbour felt there might be something in the air...

"I understand the frustration of the fans," said Rafael Benitez. "We have to make sure we show something in every game, more character, more personality. We have to manage difficult situations."

And for winger Demarai Gray, there is work for the Toffees to do to stop these defeats becoming a slump.

"As a group we have to take accountability. It's not acceptable. The manager has made it clear it is not good enough. We have to concentrate and do things properly.

"It hurts but we have to move forward."

....and reflected on it afterwards.

'That day was going to be a bad day': Exclusive footage and interviews from January's storming of the US capitolRidley Road: Caught between life and death in the swinging sixties