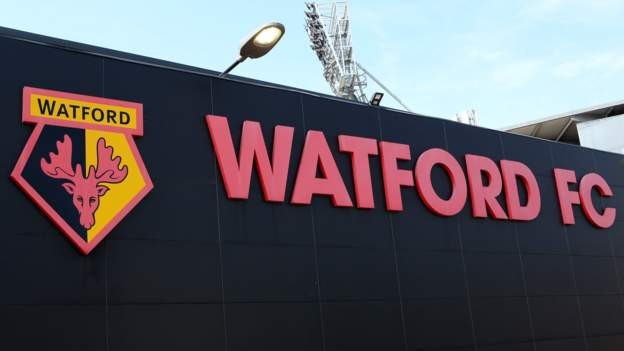 Watford were relegated from the Premier League last season

Watford have cancelled a friendly against the Qatar national side after complaints from supporters' groups concerned about human rights.

Rob Edwards' side were due to face the World Cup hosts on the final day of a pre-season camp in Austria on 10 July.

When the fixture was first announced, the Proud Hornets and Women of Watford FC groups said they were "disappointed" by the decision.

Homosexuality is illegal in Qatar and there are strict anti-LGBTQ+ laws.

The country has also been heavily criticised over its treatment of migrant workers building stadiums for the World Cup, to be held in the country later this year.

A club spokesman said: "The game was never finalised and it became abundantly clear this was a game not to play; as such, the schedule was revised."

In a joint statement, the two supporters' groups added: "WOW and Proud Hornets are delighted that Watford FC has listened to our concerns and cancelled the game with Qatar.

"We look forward to continuing our discussions with the club on all equality, diversity and inclusion issues."

World Cup 2022: Why are Qatar hosting and when is it taking place?World Cup Qatar 2022: Day-by-day guide to fixtures

Qatar will stage the World Cup from 21 November to 18 December this year, having been chosen as hosts in 2010.

Some England fans have said they will not travel to the tournament and, speaking in March, manager Gareth Southgate said: "There are the issues that potentially threaten our fans when they travel - the rights of women and the rights of the LGBTQ+ community in particular.

"Sadly, through discussions that I've had, I don't think some of those communities are going to go and that's a great shame."

The World Cup will also be boycotted by some of the Wales national team's staff because of the country's stance on gay rights.

In their own preparations for the tournament, Qatar lost 1-0 to Irish Premiership champions Linfield last week in a practice match in Marbella.