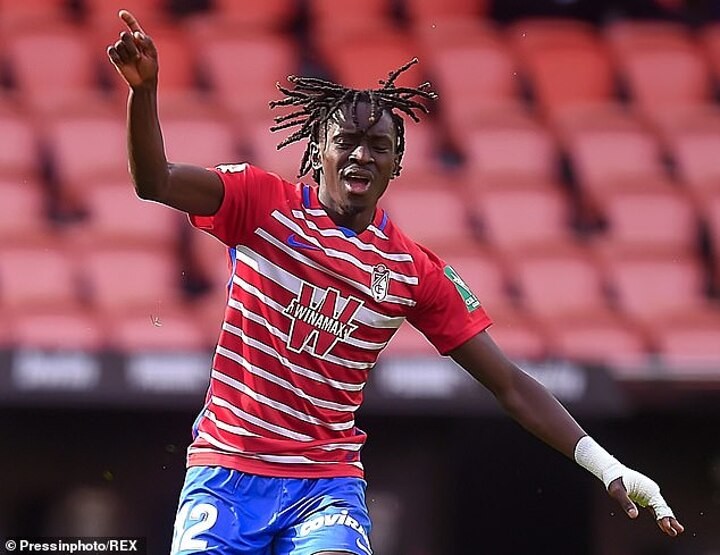 Domingos Quina responds in unequivocal fashion when asked whether Granada can pull off the most famous result in their history tonight.

'Of course. This is football. You never know,' the 21-year-old tells Sportsmail.

'Against Napoli (in the round of 32), they were the favourites but we got the job done we just need to keep believing and dreaming and everything will be possible.'

It's the sort of spirit his team need to replicate if they are to send shockwaves across European football in their Europa League quarter-final clash against Ole Gunnar Solskjaer on Thursday night.

The odds are stacked against Granada, of course. This is their first ever season playing European football.

United's European traditions are in need of no explanation.

But, as Quina explains, Diego Martinez's side refuse to underestimate themselves.

'We could surprise a few people for sure, we will fight until the end,' said the midfielder.

'We are a really passionate team, we have big dreams and goals - the manager makes us feel like everything is possible.'

Unfortunately for Quina, he is ineligible for the games against United having joined Granada on loan from Watford until the end of the season.

He said: 'I'm not going to lie, I am little bit disappointed. I like playing in the big occasions, against the big teams, in the big stadiums.

'I'd learn a lot because United are a top team with world class footballers - it will be a great experience for my team mates.

'But I'll be there supporting them. Granada is like a family, it doesn't matter (if I'm not playing) the team always comes first.'

It's that sort of attitude that has seen Quina flourish in Spain.

For the first time in his career, he is playing sustained senior football this season. He has made six appearances, five of those starts, since arriving from Vicarage Road, where he'd already played 14 times.

He is impacting games, too. He's scored twice in LaLiga - against Elche and Huesca - since joining.

He said: 'The way I started here is the way I want to be playing. Affecting games scoring goals, getting more assists.

His performances in Spain are attracting attention, too. Barcelona are known to be long-term admirers of Quina - the fact he is playing regularly in La Liga will only serve to solidify their interest.

In England, Sportsmail understands Fulham are among the clubs monitoring the youngster's situation ahead of the summer window.

'I've not thought about the future, at the moment I'm still a Watford player. I have one more year left with an option.' he explained.

'All I know is that I have to go back because with Granada there is no option to buy.

'It's really nice to hear all of the interest in me and it is one thing that keeps me motivated because I want to be the best I can be and play in a team that wants to win trophies.

'That keeps me driving forward. But I don't let it get into my head. Even though I'm young, I've experienced a lot so far about clubs wanting me.

'Speaking to this person, that person - so I don't focus on any of that stuff and don't really talk about it. I just want to keep my mind on football.

Of course, returning to Watford remains an alluring option for Quina.

The Hornets, under Xisco, are on course for an instant return to the Premier League and Quina would slot back into life at Watford pretty seamlessly.

He stays in regular contact with those team-mates he left behind in January, particularly Andre Gray and Nathaniel Chalobah.

For now, however, Quina is focussing on his life in Granada. No wonder.

As this interview draws to a close it's just started to snow here in England.