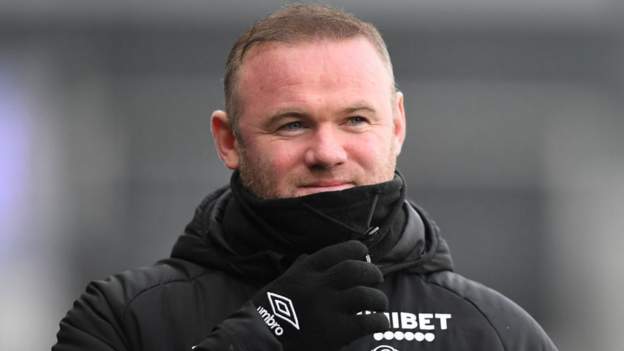 Derby boss Wayne Rooney says he is "flattered" to have been linked with the vacant managerial role at Everton.

The 36-year-old had two spells as a player at the Toffees, coming through the youth ranks before returning towards the end of his career.

Rooney said he was aware of speculation linking him with replacing Rafael Benitez, but added there had been no official approach.

"Of course Everton is a club I grew up supporting," he said.

"I'm flattered to get brought up in those conversations, but I know Everton know that to have any communication with me they have to go through the administrators."

Rooney, who joined Everton as a nine-year-old and made his first-team debut at 16, has impressed managing Derby in difficult circumstances.

The Championship club were docked 21 points this season for entering administration and breaching financial regulations but Rooney has given them a chance of survival. An impressive run of form has moved them to within eight points of escaping the relegation places.

In addition to Rooney, former Chelsea boss Frank Lampard and ex-Juventus and Real Madrid defender Fabio Cannavaro have been linked with the job.

Ferguson focused on the short term

Former Everton defender Duncan Ferguson has been placed in temporary charge but the Scot does not feel he has the experience to take on the role permanently.

"Maybe down the line, one day," he said when asked whether he could become permanent manager.

"I've always dreamed about becoming the Everton manager but I've not got the experience.

"My job is to take the upcoming games, steady the ship. The club will go through the process of identifying the new manager and they'll bring them in."

However, Ferguson accepted that a good run of results during his time in charge could change things, adding: "You never know in football do you?

"What happens down the line will be down to the club. We're always looking for the best managers in the world."