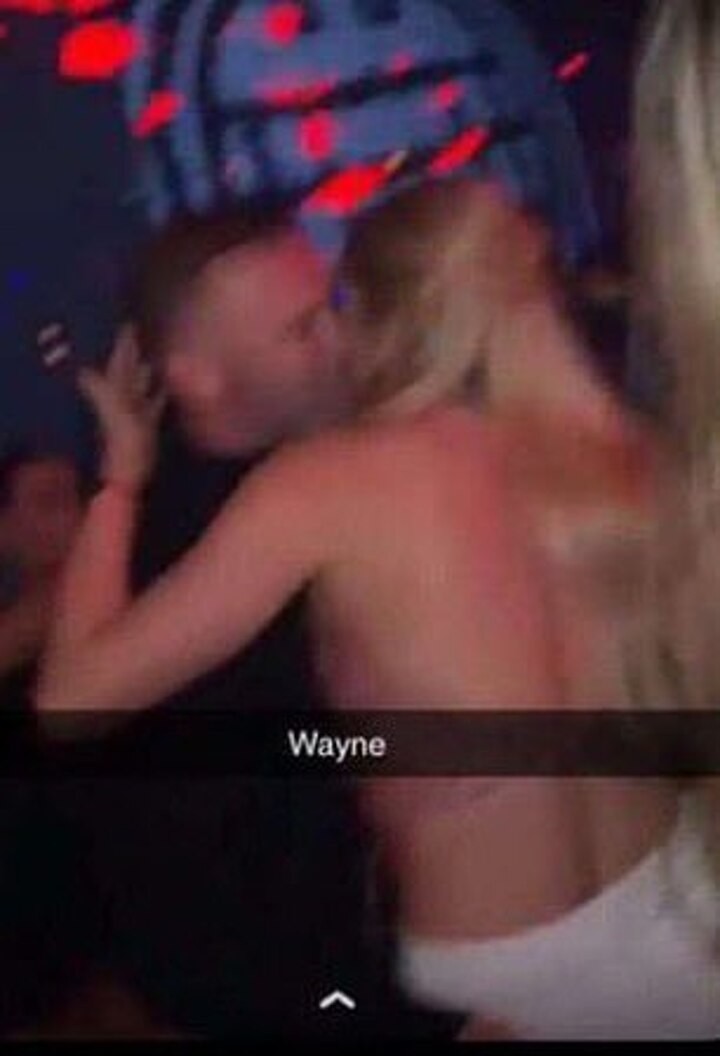 Wayne Rooney's position as the manager of Championship club Derby County is said to be 'on a knife edge' after the former England striker was pictured passed out in a hotel room with semi-naked women.

The Manchester United legend has had the spotlight firmly on him in recent days after photographs emerged appearing to show the 35-year-old asleep in a hotel room with the women. He has since alleged he was blackmailed.

Rooney, a father of four who has been married to childhood sweetheart Coleen since 2008, reportedly joined the group of girls at a room at the Staycity hotel in Manchester after a night out.

After reportedly partying at the exclusive Chinawhite nightclub following Derby's pre-season friendly with Salford City, Wayne was seen walking two women to their hotel room at 5.15am on Sunday.

In new footage taken by a fan he can be seen walking with two blondes - one of whom is believed to be Snapchat model Tayler Ryan - to their £50-a-night hotel after he partied with her and her friends Elise Melvin and Brooke Morgan.

One of the images shared heavily on social media shows Rooney leaning in to a blonde woman, although there is no suggesting of any wrongdoing on the former footballer's part.

It is understood the images were taken on Saturday night, on the first weekend that nightclubs across England were allowed to open after coronavirus restrictions were relaxed by the government.

Now in another blow to Rooney, according to The Sun his position as Derby manager is hanging in the balance after the episode.

A source told The Sun: 'It's 50-50. The club is extremely upset by the images that have emerged.

'As ­manager he must lead by example, on and off the field. That is the very least they expect from him.

'There is absolutely no suggestion of sexual impropriety on his part. But Wayne is clinging on and is desperate to keep hold of the job.

'His salary is one of the biggest in the Championship. To lose it now would be a massive setback.'

The Derby job is Rooney's first as a manager. He took over as part of the interim coaching staff last season before winning the position on a permanent basis in January 2021.

Derby will begin their new campaign in the Championship at home against Huddersfield on August 7 but it remains to be seen whether Rooney will be in charge.

The ex-England skipper, who reportedly earns £4.5million with Derby, alleged to police he was blackmailed over the images that the three women took while he slept fully-clothed and in a chair.

Rooney's representatives told MailOnline earlier this week they had made a formal complaint of blackmail to police, when social media was flooded with images of the night-out on Sunday.

It is understood that Cheshire Constabulary was not investigating any of the women in the images and there is no suggestion that the alleged blackmail threat was made by them.

But the footballer had said he received a message saying 'Morning Wayne 10 grand please mate or Coleen sees this'.

However, police told MailOnline on Tuesday night that they believe no offence was committed following the blackmail claims.

A spokesman said: 'On Monday 26 July Cheshire Constabulary received reports of a possible blackmail relating to a number of images circulating online.

Sources close to Rooney said on Tuesday night that the footballer was 'surprised' the investigation had been dropped.

Rooney is busy preparing his Derby side for the new Championship season, which kicks off in a fortnight's time.

But things aren't going to plan on the pitch either because the team currently have just nine registered senior players - two of which are goalkeepers.

On Saturday he vowed he will not walk away as manager, but warned the club it would be 'impossible' for him to field a team for the start of the new Sky Bet Championship season without significant signings.

'It's other people, which I can't control, who need to make bigger decisions,' Rooney said. 'All I can do is try to bring some dignity and pride back to this club. It is clear that has gone in the last few years and it is my job to bring that back.

'I need other people to do their job. It's not ideal, it has been very difficult not knowing what my squad will be in two weeks' time when the league starts. However we can, we need to get that sorted.

'If I am being honest, it would be easy for a manager in my situation to walk away. It's a challenge for me, I'm a fighter. I am grateful to Derby for giving me this opportunity and I will do everything I can to get the club through this.

On Tuesday, Sportsmail reported that the EFL eased the club's transfer embargo, allowing them to sign free agents on one-year contracts or take players on loan for six months if they have fewer than 23 players 'of a professional standing'.

Rooney faces further scrutiny at Derby County after he reportedly injured one of his own players during a training session.

He is understood to have tackled midfielder Jason Knight in a practice game, and the fallout leaves his first-team star now facing up to 12 weeks on the treatment table.

The Telegraph claimed that the challenge from Rooney was a '50-50' and simply an accident, but the bizarre situation is especially damaging in light of the club's woes heading into the new season.

Knight picked up the setback during Derby's pre-season camp at Pennyhill Park, a luxury hotel and spa in Surrey, with Rooney having taken part in the drill himself due to his lack of players.