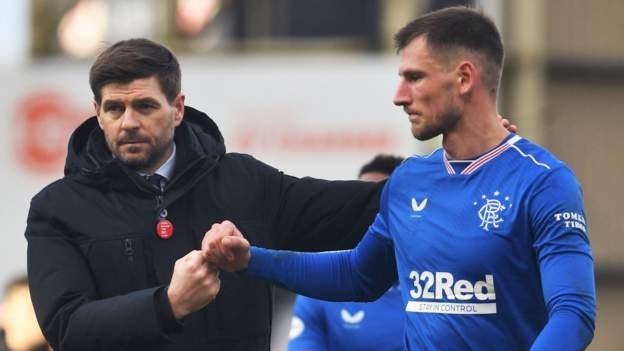 Steven Gerrard says Scottish Premiership leaders Rangers cannot "get ahead" of themselves after they dropped points for the first time in 16 games.

Gerrard's side drew 1-1 with Motherwell to end a sequence of 15 straight league wins and restore a 21-point lead over second-placed Celtic.

"The reality is there are big prizes to play for," Gerrard said.

"It's impossible not to realise where we are as a group and what's at stake. But it's important that we stay focused and don't get ahead of ourselves and stay focused on each challenge.

"That's where we are trying to keep the boys in terms of their thinking and the preparation. After a fantastic win no-one's getting too high and if we have a bump or don't get the result we want it's important to stay calm."

The Ibrox side, chasing a first top-flight title in 10 years, could have opened up a 23-point advantage over defending champions Celtic, who have three games in hand.

Swiss striker Itten scored his fourth goal as a substitute against Motherwell this season.

"The game was crying out for a Cedric-type player," added Gerrard. "He came on and did really well. If he keeps providing like that I can't ignore him for too long. I'm really pleased with his cameo. He looked strong, lively and was a threat.

"He's really honest and he's never passive. In the first half too many of our players were passive so that's what I was disappointed about."