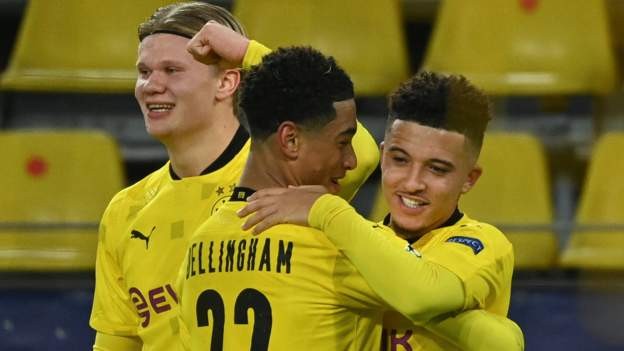 Borussia Dortmund chief executive Hans-Joachim Watzke says there will be no cut-price sales by his club this summer.

Dortmund entertain Manchester City in the second leg of the Champions League quarter-final on Wednesday, trailing 2-1 from last week's game at Etihad Stadium.

Currently fifth in the Bundesliga with six games remaining, there is no guarantee that Dortmund will qualify for Europe's top competition next season.

But if rival clubs think that will help them sign Dortmund's star men, Erling Braut Haaland and Jadon Sancho, Watzke says they are wrong.

Watzke told BBC Sport: "When Covid-19 struck, we had no debt. Not one euro. Because of that, it is a comfortable situation. We do not have to sell a player. That is important.

That is exactly the stance Dortmund took with Sancho last summer. Manchester United were told they could sign Sancho for a fee in excess of 100m euros. United felt that was excessive, but the price did not drop and the England man remained where he was.

This year, similar rumours are circulating around striker Haaland.

"I do get tired of it," said Watzke. "Last summer, everybody in England, everybody in Europe, every journalist told the public 'Jadon Sancho will play for Manchester United or wherever'. But he is still playing for Borussia Dortmund. Now everybody writes 'Erling Haaland will next season play for Real Madrid or for Barcelona, or for this or this'.

"The only way is to look after 1 September at where he is playing. I think I know where he will be playing but that is all I have to say."

Mino Raiola's much-publicised trip to Spain to discuss a potential transfer for Haaland to Barcelona or Real Madrid fuelled the talk around the 20-year-old, who along with Kylian Mbappe is viewed as one of the best young players in the game.

However, Watzke seems to have a good relationship with the charismatic and controversial agent.

"He wants to make the best deal for his player. That is his work. I know Mino very well. Mino knows me very well. We have no problems. Everybody knows what the other wants to do."

'Look at how much you have spent, Pep'

"I know Pep Guardiola very well. He is one of the best managers in the world."

The basis for Guardiola's statement was a comparison of the latest figures that show the German club spent £10m more than City in agents' fees and substantially more in percentage terms compared with both the club's overall revenue (12% v 6%) and wages (21% v 8%).

Watzke feels Guardiola should think about the amount he has spent on City transfers since he succeeded Manuel Pellegrini in 2016 - about £770m (886.5m euros) - before he starts talking about rival clubs.

"In the last five years they have spent nearly 1bn euros on new players," he said. "In five years. Who has the possibility to make this? He has not to criticise other clubs."

While happy with Dortmund's strategy, Watzke accepts there are problems with its implementation.

"It is working fantastic but it is difficult to develop a team with it because after two or three years, these young players, if they perform very, very well, like Erling Haaland or Jadon Sancho, then the biggest clubs in Europe want to buy them. But this is the only way for Borussia Dortmund."

Watzke, 61, is credited with playing a central role in steering Dortmund away from the financial abyss in 2005.

He has just extended his agreement to remain with the club until 2025 and has a clear vision for the future.

"Dortmund is not a club where you must have big visions because you don't have big money," he said. "If I had money like other clubs, who can spend 1bn euros in five or 10 years on the team, then you can have visions. What I want to have for the next years is that we get the status to be one of the best 10 or 12 clubs in Europe and normally to win some titles in Germany."

The immediate task is trying to qualify for the Champions League - and given the domestic situation, beating City is an obvious way of getting closer to achieving it.

Watzke has extended his agreement to remain with Dortmund until 2025

"Before the first game in Manchester, my opinion was that we have a 10% chance," Watzke added. "Now we have a much better per cent.

"I don't know how much but it looks very nice because we know they failed the last three times in the last eight. If we make the first goal and perhaps it will come back in their mind.

"I know Pep Guardiola very well. He is one of the best managers in the world. But it is clear, if you are the coach of Manchester City and they have spent so much money on the team, in Abu Dhabi they want to win the Champions League."