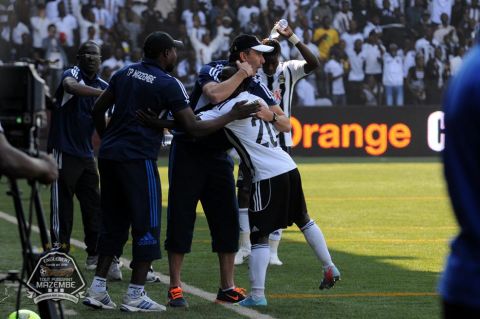 TP Mazembe manager Patrice Carteron has paid glowing tribute to the high-spirited performance put on display by Ghana wing-man Solomon Asante in the Ravens 3-0 victory over FUS Rabat in the CAF Confederation Cup.

Asante, tagged the 'le diablo' for his sadistic way of carrying out his duties on flanks, led the four-time Champions League title winners into the game, scoring their first goal in the 6th minute before setting up two others for Mbwana Samata andÂ CheÃ¯bane TraorÃ©.

The 22-year-old's performance is still earning raving reviews across the African continent with FUS Rabat coachÂ Jamal Sellami admitting the Black Stars winger was too hot for his defenders to handle.

Mazembe coach Patrice Carteron is the latest to shower praise on the former Berekum Chelsea playmaker saying the youngster was the livewire of the Mazembe team and was entirely responsible for their success.

"He has great aim and Â his determination is sky high. He eventually took over gradually in the second-half. This shows that he really has a high quality mentality," the former Mali coach said after the game.

He is drawing more and more praise from pundits of the game and has put himself strongly in contention to pick a continental award at the end of the season.