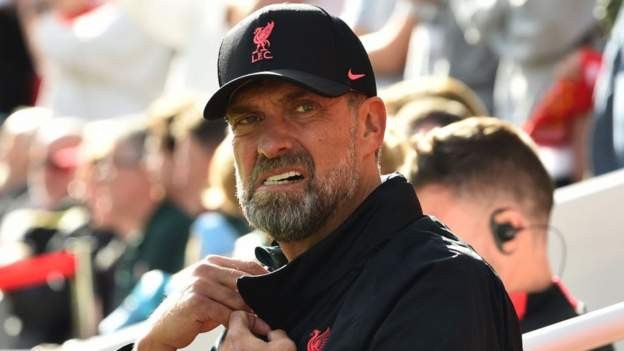 It is becoming a familiar feeling for Liverpool.

For the fifth time in seven Premier League games this season the Reds conceded the first goal on Saturday, on this occasion to an energetic and fearless Brighton side looking to impress their new boss Roberto de Zerbi.

After winning 16 of their 19 games in the second half of last season to finish just one point behind champions Manchester City, Jurgen Klopp's side are now finding their gameplans going out of the window before half-time.

Stirring fightbacks have got them out of holes in previous campaigns and this looked like being a throwback to one of those, but poor defending once again allowed the Seagulls in late on as the unmarked Leandro Trossard struck at the back post to snatch a 3-3 draw and complete his hat-trick.

Even after recovering from 2-0 down to go 3-2 up in the second half, Klopp himself was not confident his side would see the game out.

"We weren't convincing enough," he said. "I could not say I was 100% convinced we wouldn't concede.

"We have to fight through this. The boys can play much better. We need stability, consistency and top defending."

The point leaves Liverpool ninth in the table and 11 points behind leaders Arsenal - albeit with a game in hand - and Klopp knows his side need to rediscover what is missing as quickly as possible.

'We are under pressure'

This time last season Liverpool were unbeaten in the Premier League having won four and drawn three of their first seven games.

Now, however, they have managed just two wins from their seven league games so far - the thumping 9-0 win against Bournemouth and a 2-1 defeat of Newcastle.

But even in that game against Eddie Howe's side the Reds conceded first. In all competitions, they have conceded the first goals in seven of their nine games this season and Klopp knows this is something that has to be resolved quickly.

"We are under pressure," he admitted. "We want to do better, we want more points, we want to be higher up in the table.

"But we were 2-0 down to a really good opponent. We have to keep working."

Liverpool defender Joel Matip accepts that home performances have not been good enough this season.

"It wasn't our game and it started from the beginning. We have to improve," he said.

"I don't care who is coming, we just have to step up and do better."

Teams play differently against Liverpool?This was Liverpool's highest scoring draw at Anfield in the Premier League since January 2016

Why are Liverpool struggling to get on the front foot?

Klopp feels that part of it is down to the confidence of the players at the moment, but also how teams set up against his side.

"The Brighton set-up surprised us. We had no idea what they would do," said the German.

He added: "It happens quite frequently that teams do differently against us than what we can prepare for if we don't play them like the fifth, sixth or seventh time.

"[Against Brighton] I'm not sure if it was a slow start but it was a start where the gaps in areas they attacked were too big."

So what is the solution?

Klopp was not able to offer up an immediate answer in his post-match news conference on Saturday, other than they need to find a way for the players to get their confidence back quickly.

"We have to keep working," he said.

"It is a moment we have to keep going through together. I cannot say what everyone wants to hear. It is just the reality."

Next up for Liverpool is the Champions League tie against Rangers on Tuesday before what already appears to be a huge game in the title race as the Reds head to league leaders Arsenal on Sunday, 9 October.

Lose that and Liverpool would be 14 points behind the Gunners - a tally that even at this early stage of the season would appear difficult to overcome.