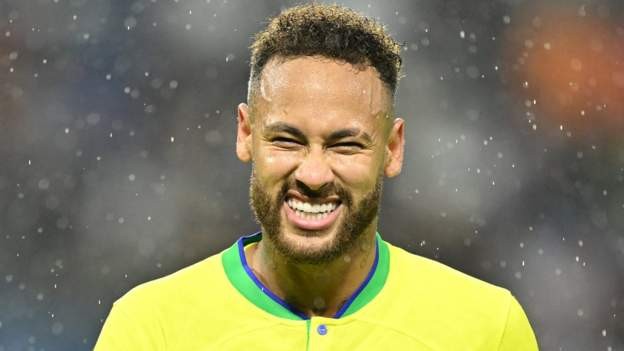 Brazil captain Thiago Silva says we will see a "better Neymar" at this World Cup after injury hampered his past two tournaments.

Neymar missed the 2014 semi-final with a back injury, and struggled for full fitness during the 2018 tournament after foot surgery earlier in the year.

However, he arrives in Qatar fully fit and having scored 15 goals in 20 games for Paris St-Germain this season.

"I think Neymar is coming into this competition in great form," said Silva.

"His preparation this time has been different. In 2014 he got injured just as he was playing so well, and in 2018 he came into the tournament in a different way because he had a serious injury so hadn't played much.

"Now with a different preparation, without any injury and any worry, we see a better Neymar."

Brazil head coach Tite has refused to say whether Lucas Paqueta will play instead of defensive midfielder Fred.

The Brazilian media have speculated that the Selecao will field a very attacking 4-1-4-1 formation.

Serbia are optimistic striker Aleksandar Mitrovic will be available to return following a foot injury.

Fellow forward Dusan Vlahovic made his comeback from a groin problem in a friendly against Bahrain and may partner Luka Jovic in attack.

Serbia don't have that much strength in depth in their squad but they have got so many talented players in their strongest XI, and at set-pieces they will be a big danger.

They might give Brazil a scare or two here, although I am not expecting any surprises with the end result.

Brazil are in excellent form, and have only lost one of their past 29 games - the 2021 Copa America final against Argentina.

Neymar is the best diver at this World Cup but he is scoring lots of goals too - and we will probably see him do a bit of both over the next few weeks.

Chris Sutton's predictions for the opening round of World Cup games

Brazil are unbeaten in 17 matches against Serbia (including Yugoslavia) since an 8-4 defeat in Belgrade on 3 June 1934. The Selecao have only had longer unbeaten runs against Ecuador (20 fixtures from 1942-2000) and Paraguay (18 games from 1954-1963). They are unbeaten in their last 15 World Cup group fixtures, winning 12,with their last defeat in the group phase coming in 1998 against Norway. Neymar has been directly involved in 42% of Brazil's last 19 World Cup goals, scoring six and assisting two.Serbia (including Serbia and Montenegro) have qualified for four of the last five World Cups but have lost seven of nine matches at the finals, the most defeats by any European nation in that period.