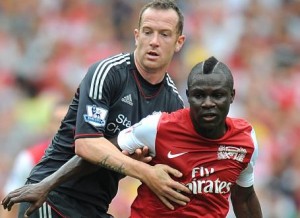 Injury has curtailed Danny Welbeck and Emmanuel Frimpongâ€™s involvement in the England Under-21s this week but their recent ascents have added to the Premier Leagueâ€™s Ghanaian flavour.

The duo further illustrate that the rise of the Black Stars is not confined to West Africa.

They are the latest members of the Ghanaian diaspora to represent foreign nations.

However, the allegiances of Manchester United forward Welbeck and Arsenal midfielder Frimpong have already been subject to controversy.

Welbeck made his senior England debut at Wembley against the Black Stars in March but Frimpong has stated his hope that his England Under-21 call-up will spur the Ghana Football Association into handing him a senior cap.

â€œI will turn down an invitation for the England senior team when the Ghana Football Association contacts me,â€ said the youngster.

â€œI hope playing for the England Under-21s will wake them up.â€ This comes from a footballer who recently said: â€œIf Ghana call me, I will ride on my own bicycle from England to Ghana.â€

His words have attracted criticism from some sections of the English media but they are uttered with the same boldness that he displays on the pitch.

While it is imprudent to make lavish predictions about talent yet to be fulfilled there are signs that, despite their rawness, Welbeck and Frimpong can make significant contributions to the Premier League and international scenes.

â€œDanny is still only 20 years of age and the lad has a great future,â€ he said in the wake of the 3-0 defeat of Tottenham in which Welbeck opened the scoring.

â€œHe has always had ability but made slow progress because he had a bit of a knee growth problem, so we knew we had to wait for him.

â€œWe put him on loan to Sunderland last season and that is when he became a man. He has grown up.â€

The forward is unlikely to re-appear before the end of September but confidence is strong that Ferguson has cultivated an environment for the youngster to thrive in.

The same cannot be said at present about his Arsenal counterpart Frimpong. The disarray at the Emirates has seen the Accra-born holding midfielder make his debut in troubled circumstances.

It said much for Arsenalâ€™s weakened position entering their 8-2 thrashing at the hands of United that many Gunners fans were ruing the absence of the 19-year-old.

Frimpong was serving a one-match suspension for his double-yellow card during the previous Saturdayâ€™s clash with Liverpool.

The youngster argued with officials for his first booking and forced referee Martin Atkinsonâ€™s hand once again with his rash lunge at Lucas. When he curbs the petulance that led to the first booking and untrammelled aggression that led to the second there are hints in Frimpongâ€™s energetic and commanding displays that he can give Arsenal solidity and greater physical presence in midfield.

The hope is that the youngster will receive the appropriate coaching and guidance to extract the best of his considerable talent.

Welbeck and Frimpong could yet end up on different sides of the international fence but their emergence provides further evidence of the emergence of Ghana as a football hotbed.