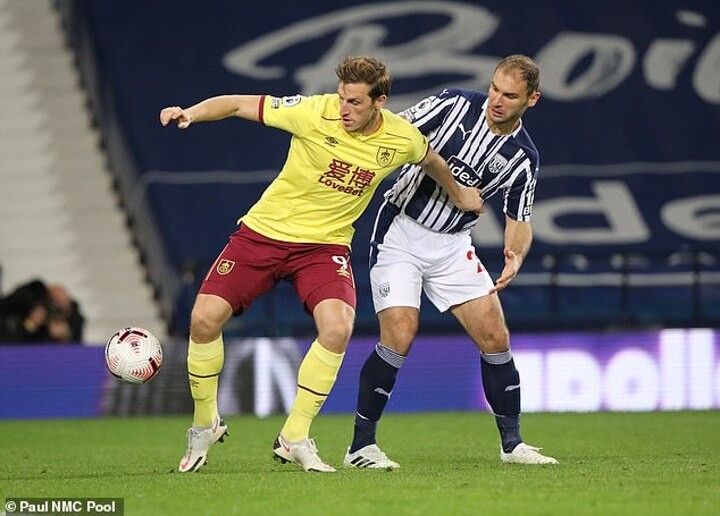 If this is what you get for your £14.95, then it is difficult to see the pay-per-view model lasting for more than a few weeks in the Premier League.

After another breathless weekend in English football's top flight, it was left to West Brom and Burnley to bring everyone back down to Earth by producing the first goalless draw of the campaign in the 47th game. Those who forked out nearly 15 quid to watch it may think twice the next time they are invited to do so.

Both sides had chances to seal their first league wins of the season. Chris Wood hit the bar for Burnley moments after the Clarets had somehow survived chances in quick succession for Grady Diangana, Branislav Ivanovic – who had a terrific league debut – and Matheus Pereira. Another debutant, Albion forward Karlan Grant, had a first-half header correctly ruled out for offside.

In between, there was plenty of physique but too little technique. Managers Slaven Bilic and Sean Dyche seemed to be competing to see who could shout the loudest, their booming voices echoing around the empty ground. But in the either end, neither team had the quality to cut through the noise, though Ivanovic's display was hugely encouraging.

The 36-year-old, a Champions League winner with Chelsea in 2012, last played in the English top flight nearly four years ago yet based on this display, his quality still shines brightly.

Ivanovic was one of six changes to the Albion team beaten 2-0 at Southampton before the international break, handing a Premier League debut to £15million striker Grant and on-loan Chelsea midfielder Conor Gallagher. Filip Krovinovic also started after completing his loan return from Benfica. Burnley were without Phil Bardsley after revealing the former Manchester United defender was self-isolating after testing positive for coronavirus.

The Croatian went close with a low 25-yard effort that Albion were convinced should have brought a corner, but this was a rare moment of excitement in an attritional first half.

Grant was the striker craved so desperately Bilic and he did give the home side cutting edge. Played in by Pereira in the 20th minute, the signing from Huddersfield hesitated for a split second and eventually fired over with his left foot. Had he not broken stride, Grant would have had a far easier chance.

At the other end, Burnley demanded a penalty when Kevin Long fell under pressure from Darnell Furlong – and replays suggested they had a case, as Furlong had a tight hold of the centre-back as he tried to deny him space at a free-kick.

When West Brom failed to clear, James Tarkowski flicked the ball to Ashley Barnes at the far post and Sam Johnstone did well to push away the rising drive.

Grant thought for a second that he had put Albion in front in the 37th minute when he headed Diangana's cross past Nick Pope, only to be denied by the offside flag. Though the call was clearly correct, there was still a tiresome VAR delay. 'I checked, it's offside – come on!' barked Bilic at fourth official Kevin Friend.

If that was a close escape for Burnley, it was nothing compared to West Brom's triple chance just before the hour mark. After a cleverly-worked corner, Diangana drew a fine save from Pope from a narrow angle, and James Tarkowski denied Ivanovic a debut goal on the follow-up. From the rebound, Matheus Pereira shot from the edge of the box and Pope was there again to thwart him.

Moments later it was Albion's turn to ride their luck. Johann Berg Gudmundsson collected an aimless thwack forward by Tarkowski and fed Ashley Westwood to cross for the unmarked Wood to head against the bar from six yards.

Dwight McNeil had looked the visitors' most dangerous attacker all evening yet when a clear chance came he could not deliver, dragging a meek effort wide from 20 yards.

Burnley were growing in confidence. Once more McNeil tested Albion with a deep cross from the left on to the head of Barnes, who brought an excellent one-handed save from Johnstone.

As the players tired, their concentration wavered and both teams smelled a winner. Conor Townsend advanced from left back and swung the ball to the far post, where Pereira volleyed it goalwards but without the venom to bother Pope.