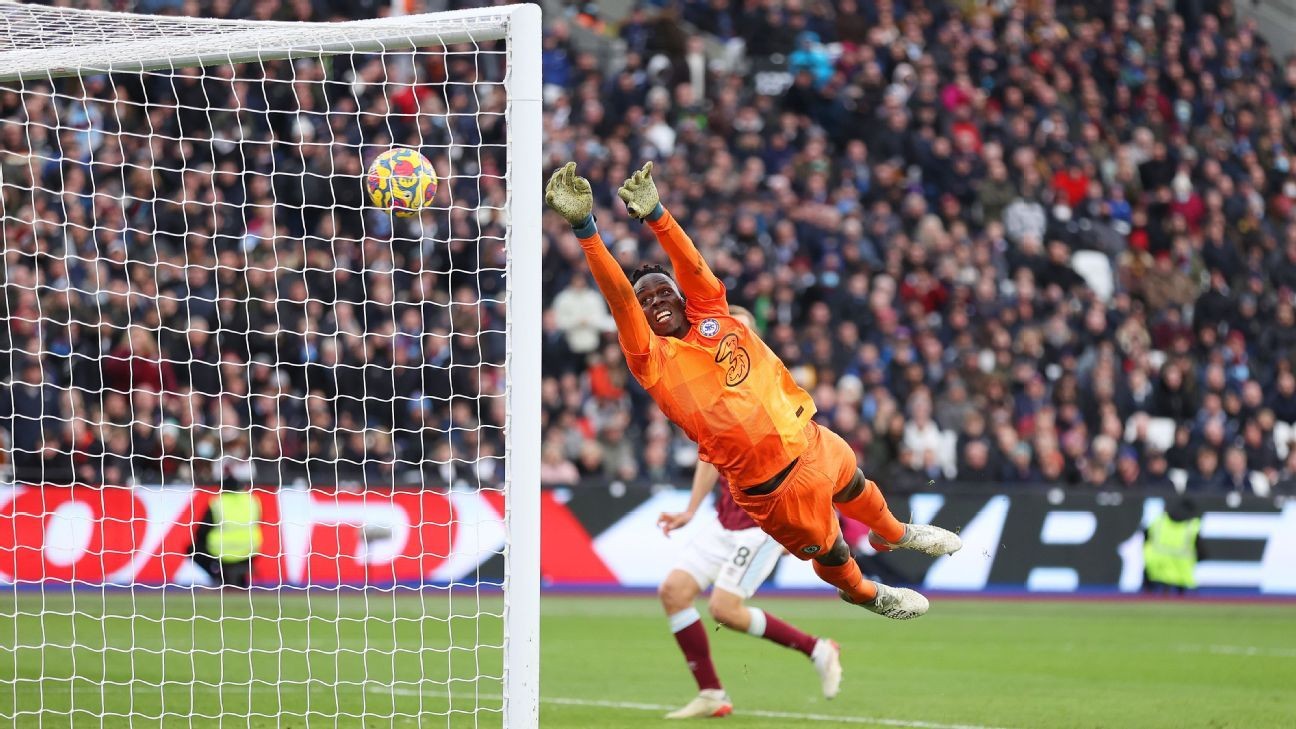 The success of Chelsea's Premier League title campaign is poised to be decided by how well they can continue their remarkable defensive record under Thomas Tuchel -- and therefore West Ham exposed weaknesses on Saturday afternoon that must be quickly eradicated.

This 3-2 defeat at the London Stadium constitutes the first time this season the Blues had conceded more than once in any competition, and it is only the third occasion since Tuchel took charge 11 months ago. It should trigger a kneejerk reaction now given that, in the German's 53 matches at the helm, they have conceded just 29 goals.

But while Chelsea continue to struggle to find proper attacking fluidity -- and another subdued substitute display from Romelu Lukaku was a reminder of the distance to travel in that aim -- the chances of lasting the pace with Liverpool and Manchester City rely precisely on the efficient, controlled defending which was absent against West Ham.

Troublingly for Tuchel, this isn't the first time. Last weekend's 1-1 draw against Manchester United featured an error from Jorginho, which gifted Jadon Sancho his goal. Meanwhile, the midweek win at Watford was made harder by Ruben Loftus-Cheek losing possession cheaply, which allowed Emmanuel Dennis to equalise.

"Every loss is a bump in the road," Tuchel said. "That will not hold us back from what we demand from us but we need to play more accurate, more stable and reduce big mistakes."

Edouard Mendy was the biggest culprit against the Hammers. The goalkeeper's superb form over the past year led to much criticism of the Ballon d'Or structure for his omission from that conversation, yet this was an afternoon he will not look back upon with any fondness.

Chelsea dominated the opening exchanges and were leading through a 29th-minute Thiago Silva header when Jorginho played a rushed back-pass, which put Mendy under a degree of pressure. With the relentless Jarrod Bowen rapidly closing him down, Mendy shunned the option to clear the ball quickly and instead got himself in a dreadful mess, hacking Bowen down as the winger nipped in front of him to take the ball. Manuel Lanzini converted and, although Mason Mount restored the visitors' advantage with a sumptuous volley from Hakim Ziyech's raking diagonal pass, Chelsea were unable to play out the second period with their usual composure.

West Ham deserve immense credit for this. They were curiously passive early on, David Moyes opting for a five-man defence that negated Chelsea's wing-backs but left them short in midfield. The second period was different. Bowen and Michail Antonio led from the front, ruffling feathers and causing problems to unsettle Chelsea into further mistakes, which cost them dearly.

Silva won a 56th-minute header from Antonio but the ball fell to Vladimir Coufal on the edge of Chelsea's box. Marcus Alonso was outmuscled too easily, allowing Coufal to find Bowen and his shot buzzed past Mendy to level the scores.

Lukaku had earlier been introduced in place of the injured Kai Havertz but Chelsea were less potent going forward, managing just one shot on target in the entire half -- after six in the opening 45 minutes -- until Arthur Masuaku's late intervention. It is hard to argue he meant it. Three minutes from time, after taking a quick throw-in, Masuaku appeared to be using space created by Antonio on the left flank to line up a cross but his delivery took a deflection off Loftus-Cheek and straightened in shape towards Mendy's near post.

Mendy was caught flat-footed and instead of taking a step to his right, he was at full stretch to his right and could only palm the ball in his net.

Edouard Mendy had one of his worst games in a Chelsea shirt against West Ham. Alex Pantling/Getty Images

"Edu is going through a rough period," said Tuchel afterwards. "I don't know why exactly but he seems to have lost a bit of confidence. Decision-making was not the highest today for the first goal but we also bring him a really awkward situation. We are far, far away from blaming anybody but we need to admit we make too many crucial mistakes at the moment that cost us three times [in a week]. The [title] race is not interesting at the moment, what is interesting is the next 90 minutes.

"We need the focus and attitude right and take care of the details. We are not good enough in the details at the moment. We need to care about the details. There is no need to start doubting about the big picture. If we don't do big mistakes, there is a big chance we win this game."

Injuries are perhaps becoming a factor.

Chelsea badly missed N'Golo Kante's ability to anticipate danger as West Ham generated a head of steam. Tuchel admitted in his post-match press conference he had no idea when the influential midfielder will return. Mateo Kovacic was also absent once more and with Havertz and Alonso joining the casualties, this month is shaping up to be a stern examination of Chelsea's durability.

Lukaku was a peripheral figure, understandably lacking sharpness after missing seven matches with an ankle injury but his longest outing since Oct. 20 will reignite the debate over how Chelsea can get the best out of him in coming weeks. Too often, they continue to resemble strangers in the final third with the Belgian on the field.

West Ham have now beaten both Manchester clubs in the EFL Cup in addition to Chelsea, Liverpool, Tottenham and Leicester in the Premier League. They are just six points behind the Blues, whose lead at the top was on the brink of being swallowed up with Liverpool and City in action as Chelsea's bus departed east London with the sun setting over the capital.

The race will surely come down to fine margins and while it is only December, Chelsea know they cannot afford too many more afternoons like this.