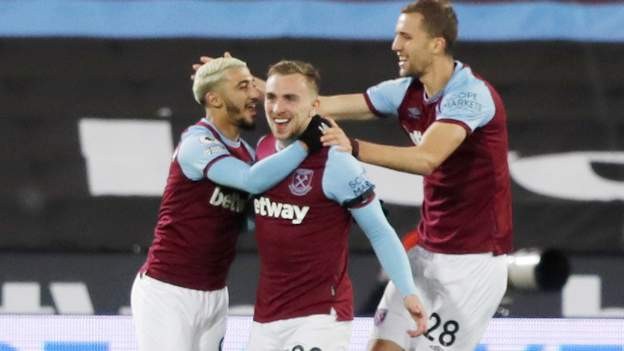 West Ham moved fifth in the Premier League with victory over Aston Villa in a pulsating match at London Stadium.

Villa's Ollie Watkins was denied a stoppage-time equaliser after an agonising VAR wait deemed his upper arm was offside, even though he seemed to be being held back by Hammers defender Angelo Ogbonna.

The former Brentford man also hit the bar with a penalty as the spirited visitors pressed for the leveller their play more than deserved.

David Moyes has quietly established the Hammers as an effective outfit this season and they got off to the perfect start when Ogbonna buried a header past Emiliano Martinez inside the first two minutes.

Villa had won all three of their previous away games and seized control of the first half after that, Jack Grealish whipping an equaliser past Lukasz Fabianski from distance.

But Moyes rang the changes at half-time and it paid immediate dividends as substitute Said Benrahma set up Jarrod Bowen for a delightfully deft header immediately after the restart to retake the lead.

Villa had plenty of chances to draw level but were left to rue Watkins' profligacy and VAR's ruling.

West Ham, meanwhile, gratefully took the win to move to within four points of Tottenham and the Premier League summit.

When West Ham were handsomely beaten by Newcastle on the opening day, the script was seemingly set for another season scrapping at the bottom of the Premier League.

But since that defeat, the Hammers have thumped Leicester City and Wolves, drawn with Man City and Tottenham and accrued their highest points total after 10 games in nine years.

Moyes's teams are always built on firm foundations and the back three of Ogbonna, Fabian Balbuena and Aaron Cresswell, shielded by Declan Rice and Tomas Soucek, have been rock solid.

Indeed, only Tottenham and Chelsea have conceded fewer in the league than West Ham.

And they carry a threat from set-pieces too, no more evident than when Ogbonna towered above Matt Targett to open the scoring from Bowen's corner.

They surrendered the initiative in the first half but Moyes showed his nous to change it, bringing on Sebastien Haller and Benrahma at half-time, and he was instantly rewarded with the winning goal.

They rode their luck, not least with Villa's missed penalty and disallowed goal, but they took their chances and held on.

West Ham may have been written off earlier this season but Moyes has previous with taking unfancied sides into the upper echelons of the league.

With the Hammers sitting in the European places after 10 games, Moyes's stock is rising once again.

Dean Smith's side have been a difficult team to predict this season - three wins out of three on the road before this one but flaky at home.

They destroyed champions Liverpool but shipped goals in underwhelming defeats to Leeds, Southampton and Brighton.

They were also caught cold in the opening exchanges of each half here, two simple headers breaching their backline and undoing their good work going forward.

In Grealish, though, they had the game's outstanding player and he deservedly hauled his side level with a trademark classy finish from outside the box midway through the first half.

His quick footwork was a constant threat but unusually he was let down by his supporting cast as Watkins not only missed from the spot but headed over another presentable opportunity.

Ollie Watkins has failed to convert four of his six penalties taken in English league football, scoring once for both Aston Villa and Brentford while failing once for the Villans and three times for the Bees

Villa controlled the majority of the play but were not ruthless enough in either box to turn their dominance into points.

When Watkins tucked home in injury time, it seemed they had salvaged a point only for VAR to intervene and leave Smith counting the cost of those missed chances.

'Not thinking about VAR' - what they said

West Ham boss David Moyes: "Our performance was not very good. We showed resilience to get the three points as Aston Villa made it really difficult for us.

Aston Villa manager Dean Smith: "I'm disappointed with the result but I thought we were great tonight. We've had enough chances to win the game and that's why it hurts so much.

"They've given the decision offside for his arm but the only reason his arm is there is that he's being fouled. If it's not a goal it should have been a penalty.

"I won't go home thinking about VAR. It frustrates everyone but there's nothing we can do about it."

West Ham have won three consecutive Premier League games for the first time since May 2019, while they have lost just one of their last eight (W5 D2) after losing the two directly before thatAston Villa have lost four of their last five top-flight games (W1), after enjoying an unbeaten run of eight games before that (W6 D2)West Ham became the first side to score in the opening two minutes of the first and second half in a single Premier League game since Man City against Fulham in September 2018A divisional-high five of Aston Villa's Premier League goals this season have come from outside the box (Grealish two, Barkley two and McGinn one)These two sides have made fewer changes to their starting XIs than any other teams in the Premier League this season (Aston Villa four, West Ham five)Aston Villa playmaker Jack Grealish has been directly involved in 10 goals in the Premier League this season (five goals, five assists), a haul only Spurs pair Harry Kane (16) and Son Heung-Min (11) can better

West Ham will welcome 2,000 fans into London Stadium for the visit of Manchester United next Saturday (17:30 GMT). Aston Villa will hope to bounce back with a home game against Newcastle United on Friday (20:00 GMT).

GOAL OVERTURNED BY VAR: Ollie Watkins (Aston Villa) scores but the goal is ruled out after a VAR review.

Attempt saved. Bertrand Traoré (Aston Villa) left footed shot from outside the box is saved in the centre of the goal. Assisted by Jack Grealish.

Jack Grealish (Aston Villa) wins a free kick in the defensive half.