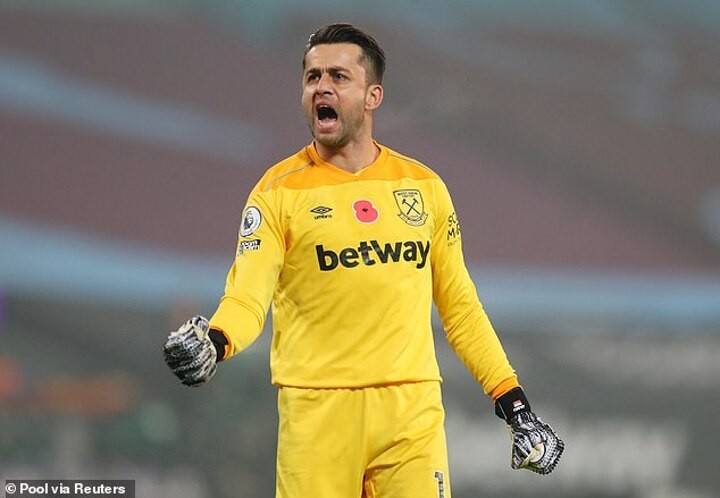 Lukasz Fabianski says he understands why kindred spirit Emi Martinez left Arsenal – as he did the same thing at the same age.

West Ham keeper Fabianski and Villa No.1 Martinez will be on opposite sides when their respective clubs clash on Monday night.

But they are bonded having come through the ranks at Arsenal, where neither were able to nail down the No.1 spot at and had to move on in order to further their career.'

'Obviously we left the same club so you can find a lot of similarities between us,' said Fabianski. 'Emi is 29, which is exactly the same age I left for Swansea.'

The move to Wales worked out well for the Polish international. Not only did he become an established Premier League starter, but he went on to be named Swansea's Player of the Season and play regularly for his country.

Despite Fabianski's commanding performances in goal, the Swans' were relegated that season and he made a successful switch to West Ham. The Pole again won player of the year in his first season.

With the likes of Villa skipper Jack Grealish as a teammate, Martinez will have his work cut out to emulate Fabianski's impact.

However, with four clean sheets and a penalty save in his first eight Premier League appearances the Argentine has made a brilliant first impression at Villa Park.

The two 'keepers may not have a personal relationship, but Fabianski, who spent seven seasons under Arsene Wenger said he understands why Martinez joined Aston Villa, after a decade in north London.

'Even though I'm not in contact with him, when you listen to his interviews he speaks a lot about having a chance to play week-in, week-out and that was basically the same idea when I left Arsenal.'

Leaving Arsenal worked out for Fabianski, only time will tell if Martinez has also made the right decision.

Either way, he is preparing himself for anything that Grealish and co. can throw at him.

'You kind of have to be prepared for anything. You prepare for the worst, that you're going to be really busy, but then on the other hand you have to just be focused for the 90 minutes and make sure you do all your bits in a good way and in the right way.'