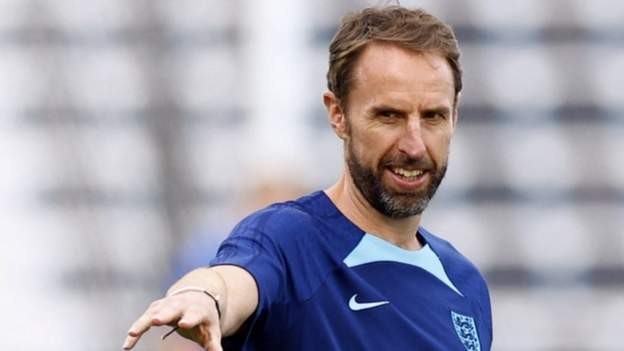 But the opinion of the Three Lions has changed since they reached the 2018 World Cup semi-finals and the final of Euro 2020, says Southgate.

"I think there's always been a level of respect for England but I think we've got credibility now," he told the BBC.

"To get to a semi-final then a final, I think the rest of the world believe that England are competitive and they know that we have performed under pressure a lot more in the last few years.

"When I travel around Europe and the world and meet football people, there's definitely a greater appreciation of what we've done."

Under Sven-Goran Eriksson, England reached the quarter-finals at three straight tournaments between 2002 and 2006.

Southgate took charge in 2016 and the Three Lions now have the chance to reach a third straight semi-final for the first time when they face France on Saturday.

"Four years ago we could have talked well but we didn't have actual evidence of winning big matches and going through big nights together as a group," he added.

"I think over this period of time we've had so many of those occasions that now there's less satisfaction with getting to the quarter-finals, there's more desire to go further and there's more evidence that we've come through these nights well. I think for any team that's an important part of growing."

Southgate unsure whether Sterling will feature

The Chelsea forward, 28, flew back from Qatar on Sunday but is expected to rejoin the squad in Al Wakrah on Friday so should be available for selection on Saturday.

"I haven't had chance to sit with him yet," said Southgate.

"We've spoken on the phone and I think he's in a better place in that he feels he can come back in and has had the time he needs to help his family. Whether he's going to have done enough to be involved in the game is a different matter.

"He's had two long flights and missed a lot of training with the team - we're going into the level of game where you need to be fully on it.

"It's great for us that we've got the option of having him back with us, that he's back with the group, but in terms of involvement for this game, that's a bit more complicated."