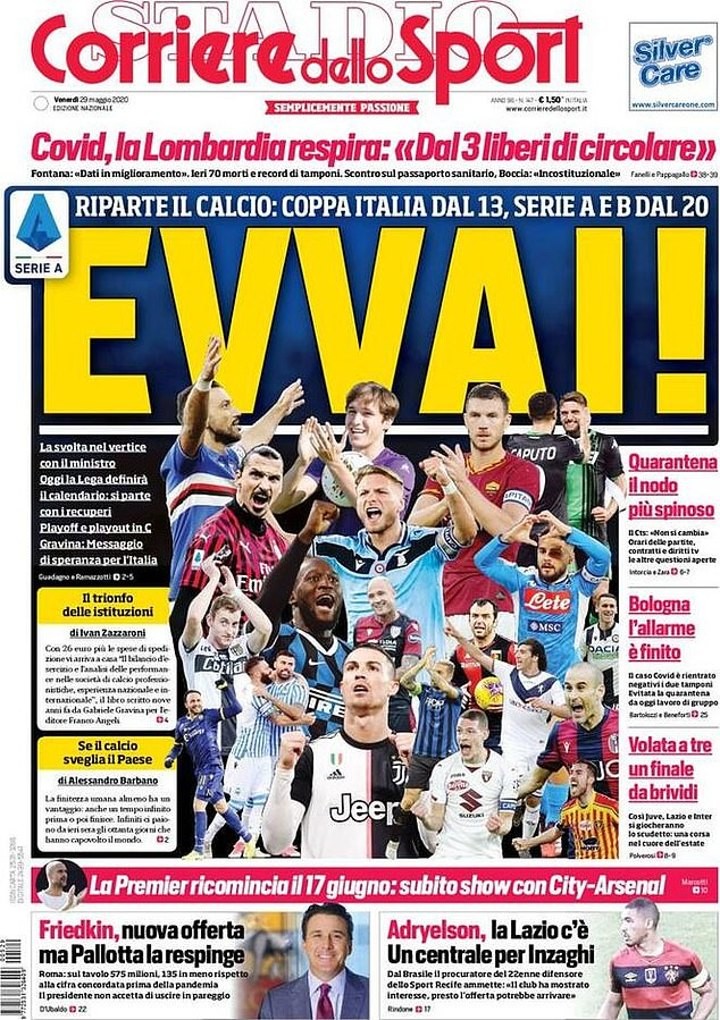 Italy's sports newspapers were united in their delight on Friday morning following the announcement that top-level football will soon return following the coronavirus pandemic.

It was revealed on Thursday that Serie A and Serie B - the top two levels of the Italian football pyramid - will be back on June 20 for a feast of football with 127 games in 50 days.

The likes of Corriere dello Sport, Tuttosport and La Gazzetta dello Sport all led with the huge news on their Friday front pages, with the latter exclaiming: 'Game on!'

Tuttosport's main headline reads 'About time!', before going on to say: 'We're getting back on the pitch.' Corriere dello Sport, meanwhile, quite simply state: 'Hurray!'

Gazzetta also write 'What a summer', before going on to detail the incredible amount of matches being shown in just 50 days before the season ends on August 2.

The news of a June 20 start date was revealed by Sports Minister Vincenzo Spadafora on Thursday following a three-month sporting layoff.

Serie A was put on hold on March 9 as part of a nationwide lockdown to curb the spread of the coronavirus.

Clubs in were allowed to return to team training earlier this month - but matches remained some way off following a government decree banning sporting events until June 15.

Prime Minister Giuseppe Conte signed off a motion on Sunday banning 'any event and sporting competition of any order and discipline' until June 14.

Spadafora gave the league the all-clear to resume in three weeks time on Thursday, although it will have to wait a week longer than it had initially hoped.

He added that there was a possibility the resumption of the league, which was suspended on March 9, could be preceded by Italian Cup matches one week earlier.

Spadafora made the announcement after a conference call with representatives from the Italian Football Federation (FIGC), the players' association and the Serie A league.

'Italy is starting up again and it's only right that football can also get going,' he told reporters, adding that the government had approved health measures suggested by the FIGC plus a backup plan in case the league had to be stopped again.

'In the light of this we can say that the championship can start again on June 20,' he said. 'There's then the possibility that the Italian Cup semifinals and final can be played on June 13 and 17.'

'If the curve changes and the league has to be stopped again, the Italian football federation has assured me that there exists a plan B - playoffs - and also a plan C - leaving the standings as they are.

There are 12 rounds remaining in Serie A, plus four matches that were postponed from the 25th round.

Juventus, bidding for a record-extending ninth successive Serie A title, has a one-point advantage over Lazio. Third-place Inter Milan are nine points behind Juventus but have played a match less.