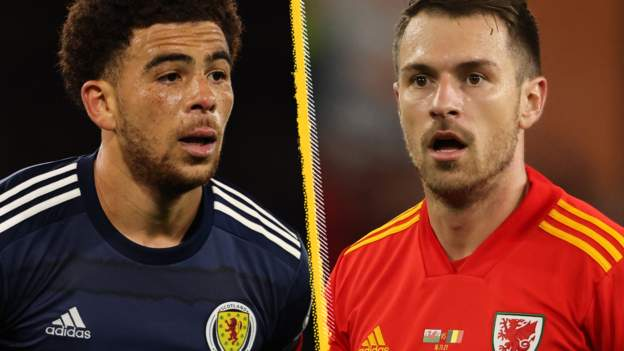 By the time Qatar 2022 comes around, Wales will have waited 64 years to play in a World Cup.

Scotland's 24-year absence pales in comparison. But both teams are now just two games away from ending that torment and will await Friday's play-off draw with a mixture of excitement and trepidation.

Impressive results in their final group games against Belgium and Denmark respectively ensured Wales and Scotland will be seeded when the fixtures are decided from 16:00 GMT.

But how does it all work? And what might await both sides?

First, a brief history lesson. Wales, remarkably, have only played at one World Cup.

That came in 1958, when group-stage draws with Hungary, Mexico and Sweden, then a play-off win over Hungary, earned a quarter-final meeting with eventual winners Brazil.

The scorer of the only goal in that tie? A 17-year-old called Pele.

Scotland's history with the tournament is far richer - even if those memories have faded a little - with eight appearances at the big show between 1954 and 1998.

None have been particularly successful, with assorted calamities befalling a succession of talented squads, the most recent the 1998 jamboree in France.

How does the draw work?

There will be 12 countries in Friday's draw, with the six seeded teams hosting the six unseeded sides in the semi-finals. So far, so simple.

But the draw will be split into three paths, each containing two semis. The winners of those ties will meet to decide who will claim one of the three places in Qatar. Got it?

So by the time the draw is done on Friday each nation will know their semi-final opponents and which two teams would then stand between them and a place at the World Cup.

Oh, and the seedings are forgotten for the three finals, with order of the draw determining which sides are at home.

The semi-finals and finals will take place over the course of five days from March 24 to 29.

So who could Wales and Scotland get in the semis?

Wales' 1-1 draw with Belgium and Scotland's 2-0 win over Denmark means both will host an unseeded nation.

That doesn't mean it will be easy... Austria, North Macedonia, Turkey, Poland, Ukraine and the Czech Republic were all at last summer's Euros.

The Czech Republic got the better of Scotland at Hampden last June, but Wales picked up four points from six against Jaroslav Silhavy's men in qualifying. They also upset Turkey at the Euros.

Ukraine and Austria reached the last eight, but Scotland took four points from the latter in this campaign, including a win in Vienna.

The prospect of keeping out Bayern Munich's talisman Robert Lewandowski would be a daunting task if paired with Poland, who were runners-up in England's group, while North Macedonia started their campaign with a win in Germany.

That said, will any of those sides fancy a trip to Cardiff or Glasgow?

What about the final?

Now this is where it gets properly daunting.

Euro 2020 champions Italy and 2016 winners Portugal will be the favourites to claim two of the three available places in Qatar, even if the former missed out last time. Russia and Sweden will fancy their chances too.

The key, surely, for the home nations will be to be given another home tie. They might also hope that an unseeded team can shock one of the big boys in the semis.

After that, it's down to a one-off 90 minutes - or maybe 120 plus penalties - to decide if their lengthy World Cup droughts will be over.

'I was more of a continental player': Glenn Hoddle shares an insight into his life in footballAre con artists pathological liars? The man who manipulated his way into the lives of the rich and famous