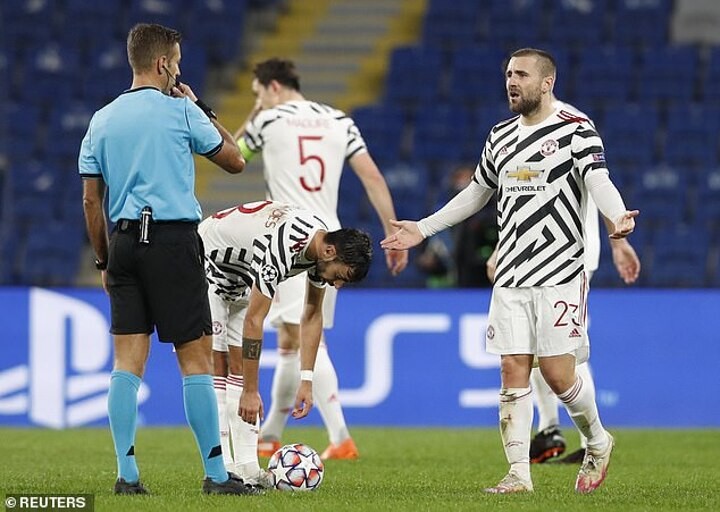 Tuesday night sees a chance of revenge for Manchester United when they welcome Istanbul Basaksehir in the Champions League.

In the reverse Group H fixture on November 4, United suffered a woeful 2-1 loss in Turkey courtesy of goals from Demba Ba and Edin Visca.

The result put a dent in the Red Devils' last-16 qualification hopes - but it was the embarrassing defending in the run-up to Ba's goal in particular that led to a wave of fierce criticism hurled at Ole Gunnar Solskjaer and his men.

So what can the manager do to avoid to another repeat result and social media backlash?

Cut out the Sunday League errors

Let's start with the obvious one: the calamitous defending. The manner in which United conceded both goals against their Turkish opponents was unforgivable - especially the first for Ba's strike.

Paul Scholes compared it to 'Under 10s football'. Rio Ferdinand claimed you 'wouldn't see this on Hackney Marshes'. Robin van Persie couldn't remember any team conceding such a bad goal.

All three are United greats who won trophies with the club. Their damning criticism of Ba's opener says it all.

It was inconceivable to let the 35-year-old run in on goal unopposed from inside his own half before finishing past Dean Henderson. What was more worrying was that it came from a United corner in the 13th minute of the match.

How there was no iota of football intelligence from the Red Devils in that moment remains baffling - with not one player goal-side of Ba. All 10 outfield players were in Basaksehir's final third - mind-boggling. Delving further, it appeared nobody on the United bench flagged this glaring error on the sideline before Ba was played through on goal too.

The second goal was almost as equally as bad as Juan Mata lost possession after a poor pass from Bruno Fernandes allowed the hosts' Deniz Turuc to race clear before whipping in a cross. United's defence were a mess again as Visca slotted home unmarked at the back post - with the visitors all sucked in towards the near.

Solskjaer would have shown his players this horror show and would have drummed into them that this was unacceptable. This is a game that United can't afford to lose so expect a lot more solidity in this area.

Come out of the blocks fast

United were ponderous and slow in Turkey and this has been a microcosm of their season. Solskjaer's side often start games too passively which allows their opponents to get on the front foot early and play with a vim that the Red Devils often lack.

This was the case three weeks ago when the warning signs were there for United before Ba's goal. And the moment that the Super Lig outfit took the lead it looked like it was going to be a long evening for United, something that it became.

Basaksehir were happy to sit deep and counter United who failed to move their opponents about with any incisive patterns of play.

In the Red Devils' DNA is to move the ball quickly and at pace, so it'll be interesting to see if they can do that at Old Trafford. Against West Brom at the weekend that wasn't the case and they were fortunate to come away from that Premier League encounter with a win.

When Bruno Fernandes flourishes, so do Manchester United. However, in Turkey that wasn't the case as the Portuguese playmaker was below-par for once.

At the Fatih Terim Stadium, he lost possession a staggering 34 times - meaning he did so more than once every three minutes.

Fernandes' pass completion was 72 per cent - United's lowest alongside Anthony Martial - while only 63.5 per cent of his balls in the final third went to their intended target, highlighting his frustrating display.

Furthermore, this was emphasised further by the fact he failed to create a single chance all game, only completed seven of his 14 long passes and didn't complete one cross from six attempts.

United had cause for concern about his ball retention last summer before deciding to sign him in January - a move which has worked out for the club tremendously with the 26-year-old bringing a much-needed creativity to the side and reinvigorating their attack.

Sometimes you have an off-day and the Old Trafford outfit will be hoping it was just that for Fernandes. Since then he has scored three of United's four Premier League goals (twice in a 3-1 win at Everton and the winner in the 1-0 triumph over West Brom) as well providing the assist for the other.

He was the club's top goalscorer last season, but so far finding the back of the net has been a struggle for Martial this campaign.

The 24-year-old netted 23 goals last term but has only scored twice so far with both coming in the Champions League against RB Leipzig and Istanbul Basaksehir - the latter being a fine header to halve the deficit.

A three-match ban, following his red card against Tottenham, hasn't helped the Frenchman's cause but he hasn't reached previous standards set.

Martial is looking to become the first Manchester United player to score in three consecutive UEFA Champions League appearances since Wayne Rooney in March 2010, but the question is, will he get the opportunity to do so on Tuesday?

Waiting in the wings is summer signing Edinson Cavani, who joined as a free agent on deadline day. The 33-year-old is yet to start a game for the Red Devils but has come off the bench six times. He was brought in as an alternative to Martial and his wily movement in the box could pose Istanbul a different type of problem than what they faced at the beginning of the month.

Just like the much talked about Donny van de Beek situation, Solskjaer will have to soon give Cavani starting opportunities and Tuesday's game could be the perfect game for that. Aside from his movement, the Uruguayan provides a target up front that United have lacked since Romelu Lukaku's departure.

Either way, Solskjaer has laid down the gauntlet to Martial moving forward.

'Anthony showed he made big strides last season, now it's time again to make even bigger strides and to develop more,' he said ahead of Tuesday's clash.

'He scored 23 goals last season, which was a big return. He took big strides towards becoming the striker he can be.

'Every season is a challenge and you cannot rest on your laurels at Man United. There are demands on every position.

'We want Anthony to kick on. His conversion rate has always been good, but at the moment keepers have made good saves against him.

'Anthony is no different from other players, he's not had a pre-season as normal and is getting ready for peak form.

'He had a three-game suspension, so he's lost too much football. But he scored against Basaksehir last time, good header, and I hope he'll get to his best again.'