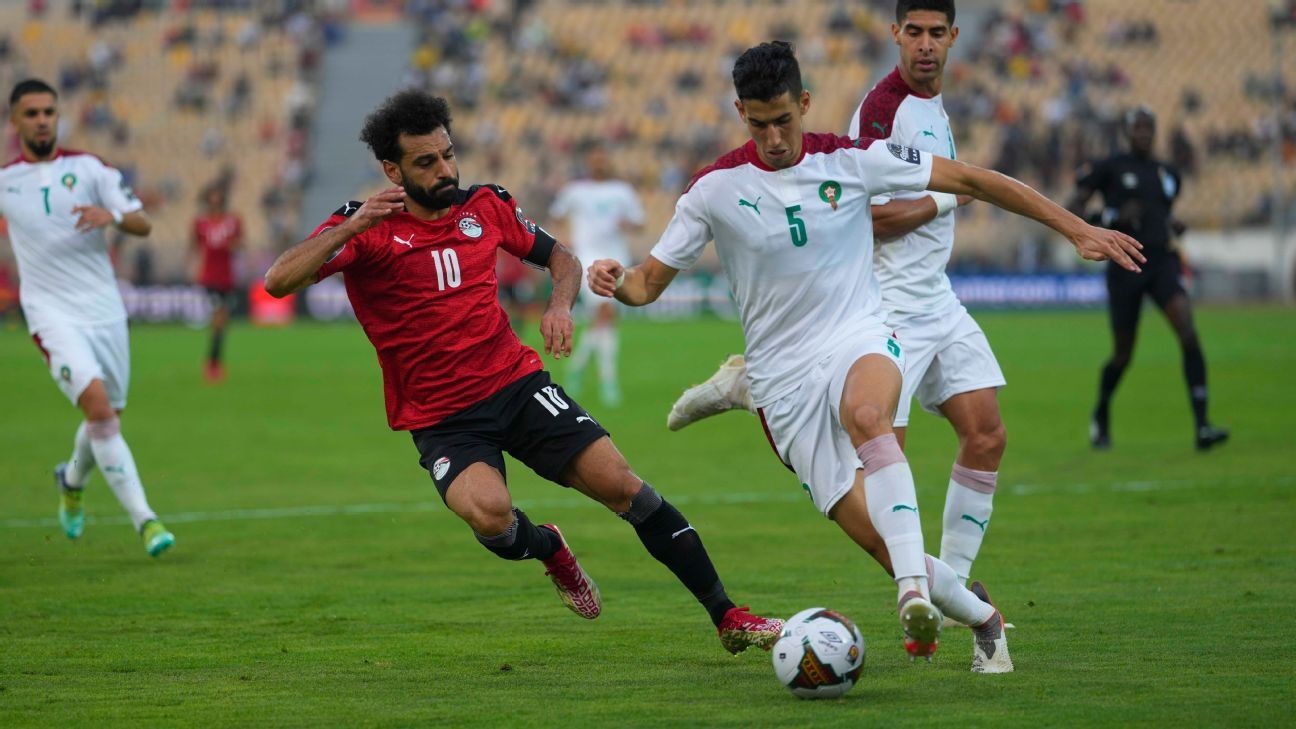 Since the early days of his career, West Ham United's new £30 million Moroccan recruit Nayef Aguerd has never been one to underestimate his own abilities, or second-guess his decisions.

Back when he was just 21, on the books of FUS Rabat in the Moroccan Botola, I approached the central defender with a proposal from a club in Major League Soccer, who had informed me that they were seeking a player with Aguerd's skillset.

For most players in Africa's top flights -- even in the more lucrative leagues of the continent's north -- the chance to move to the United States and MLS would be an irresistible offer, moving to a more professional environment, a club with greater facilities, and a more visible league.

Additionally, MLS was increasingly seen as a viable springboard to Europe, with players able to prove themselves in a more rigorous US environment before moving back across the Atlantic.

However, Aguerd, now 26, wasn't interested. He insisted instead that he was holding out for something better, without even considering the MLS offer, before Europe's transfer season opened in the summer.

"Listen, I'd really like Europe," he told me then, and duly got his wish; his patience and self-belief paid off when Dijon of the French top flight signed the defender six months later.

The only thing he was worried about was his accent: "Of course I speak English," he told me, "but just not with the British accent..."

In truth, when Morocco hosted the African Nations Championship [CHAN] -- the biennial tournament for African players based in their domestic leagues - in 2018, other members of the Atlas Lions squad generated more attention than Aguerd did.

His defensive partner Jawad El Yamiq was snapped up by Genoa during the course of the tournament, while striker Ayoub El Kaabi -- who broke the all-time tournament goal record when he banged in nine goals -- had scouts and recruiters fawning over his poaching instincts.

Yet Aguerd went under the radar, eclipsed by his defensive partner Benoun, who was promptly named in the Team of the Tournament.

However, it was clear that the cerebral youngster was an absolute thoroughbred in the heart of the backline. Playing with a confidence far beyond his years, his intelligent positioning, pure athleticism, and anticipation suggested that Aguerd was capable of stepping up to a higher level.

Premier League 2022-23 fixtures: Storylines and games you can't miss7dJames OlleyEnjoy the break, because the 2022-23 Premier League season is jam-packed2dMark OgdenTransfer window preview: Our guide to the biggest deals1dESPN

"He was a great player," teammate Ayoub Nanah told ESPN. "He had so much potential back then."

Critically, he was also left-footed, which, coupled with his sharp use of the ball, made him particularly valuable, considering the relative dearth of cultured left-sided centre-backs who can help to balance the backline.

He had learned his technical trade at Morocco's celebrated Mohammed VI Academy, where a focus is placed on a players' footballing intelligence, their studies -- Aguerd has a scientific Bachelors degree with honours -- and maturity in the rest of their day-to-day life.

The defender had appeared destined to make the move much earlier than 22, having trialled at Malaga earlier in his career, and was even targeted by Valencia during his time at the Mohammed VI Academy.

The Spanish giants were closing in on a move in early 2014, only for Valencia's change of ownership -and the arrival of Peter Lim - to put any pending recruitment on hold, and ultimately led to a re-direction of their transfer focus.

Aguerd stayed in Morocco and begun to make his mark after signing for FUS Rabat, moving from midfield to defence and helping the historic but hitherto unsuccessful club win their first Moroccan league title in 2016.

Morocco's then-coach Herve Renard, conscious of the seam of talent that lay within the domestic top flight, and potentially aware of the need to cultivate a successor for Benatia -- with whom he endured a testy relationship -- gave Aguerd a first cap in late 2016.

"I've watched him several times, and although he's young, he exudes a certain maturity," Renard remembered to ESPN. "He's an intelligent boy, cultivated, and he wants to learn and to progress without going too fast."

In moving to Dijon at 22, Aguerd probably benefited from an increasing trend among sides particularly in France and Belgium to seek ready-made, battle-hardened players who can compete for first-team minutes, changing the perception of Africa as being a market exclusively for promising teenagers.

It was certainly easier for Aguerd, arriving as a capped Morocco international and a Botola winner, to settle in France, even if he did require time to adapt to the intensity and pace of Ligue 1.

In the first season he made just 13 league appearances, while injuries and then the coronavirus pandemic affected his progress during the 19-20 campaign, with Ligue 1 opting to curtail the season 10 matches early, rather than resume the league as the first wave of COVID-19 in the country subsided.

By this point, Aguerd's performances had caught the eye of Stade Rennais, keen to bolster their ranks after unexpected qualification for the Champions League, and they decided to move for the North African despite the stop-start nature of his time at Dijon.

That would be transformed into unswerving consistency -- both in minutes and performance -- at Rennes, where Aguerd amassed 66 league appearances over the last two years and tasted Champions League football in the 20-21 season.

Despite losing Edouard Mendy to Chelsea, the Red and Blacks have still registered the third best defensive record in Ligue 1 across the last two seasons, with only Paris Saint-Germain and LOSC Lille conceding fewer than their 80 goals.

Nayef Aguerd was Rennes' premier defender during the 2021/22 season, taking on the likes of PSG's Leo Messi with aplomb. JULIEN DE ROSA/AFP via Getty Images

Aguerd has been influential, seeing off the challenge of Italy international and Juventus loanee Daniele Rugani, demonstrating greater authority after the exit of captain Damien Da Silva, and improving his aerial game, which required work upon his arrival at Roazhon Park.

No defender in France last term won more aerial duals across the campaign than Aguerd, who averaged 3.1 headers won per match, while leaning mainly on his qualities of anticipation and shrewd timing, rather than pure height.

It's an added edge to the defender's game -- one that will serve him well in the Premier League -- despite his key strengths being in reading the game on the ground, utilising the ball effectively in possession and, of course, that left foot.

Over the last 12 months, he's established himself as Morocco's starting centre-back, one of the first names on the teamsheet and with his calm, professional demeanour making him a valuable on-field leader for coach Vahid Halildhozic.

Longer term, the World Cup awaits, but in the meantime, the prospect of tackling the Premier League with West Ham feels like a sensible next step for the defender, and potentially even a coup for the Hammers.

Badr Boulahroud, one of Aguerd's former Morocco team-mates, told ESPN: "He's worked hard to be at the place he is now, and furthermore, he's also humble and a fine player.

"He's improved his speed, and now he's going to be a great fit at his new club, you'll see."

And, he's perfectly placed to start working on that British accent.