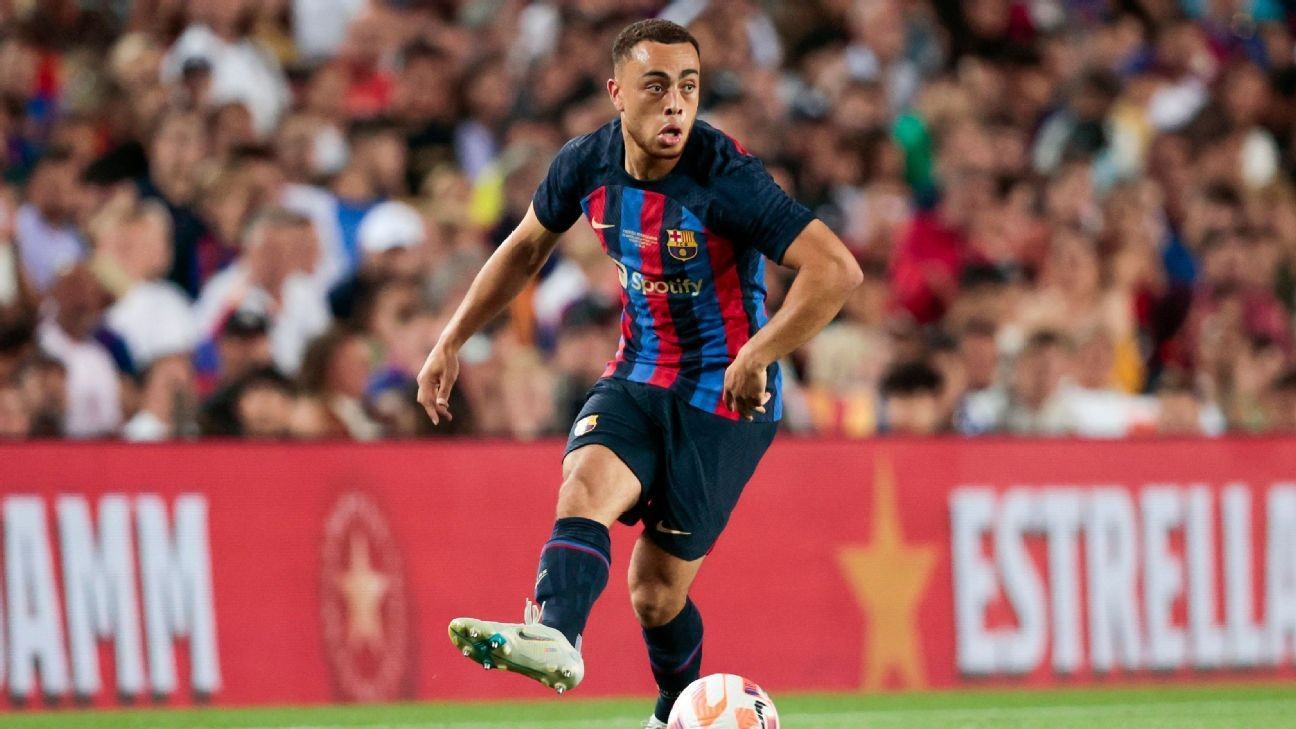 Sergino Dest's days at Barcelona were numbered ever since manager Xavi Hernandez said publicly that the U.S. men's national team defender had no place in the squad anymore, making a move before the summer transfer window closed all the more urgent for Dest.

After being linked to Manchester United and Villarreal, the 21-year-old right-back has found his landing spot: He's off to Italy to play for AC Milan on loan, in a deal that includes a €20 million option for a permanent transfer.

With the World Cup just three months away and Dest having been a key figure for the U.S. squad in the leadup to the tournament, the timing of this move could have big implications not just for Barcelona and AC Milan, but also for the U.S. national team and for Dest's own future.

Why did Dest need to leave Barcelona?

A combination of factors led to his exit, and in part, he is a victim of circumstance. But while the club's financial situation proved the final nail in his coffin, it's also true that Xavi cited tactical reasons when the two spoke earlier this month.

After almost a year in charge, Xavi remained unconvinced that Dest suited his style of play. He made that clear by leaving him out of the squad for Barca's three league games so far this season. Still, Dest insisted on his desire to remain at Camp Nou; as recently as last week, sources close to the player told ESPN he intended to stay even as intermediaries and the club worked on finding him a move.

However, as deadline day neared, Dest decided to reevaluate his options in part because even if he does not fear being left out of Team USA's World Cup squad, he did consider what it would mean to go into this winter's tournament Qatar with a lack of regular football.

Manchester United would have been his first option. Erik ten Hag, his coach at Ajax, was keen on signing him, but United already have two right-backs in Diogo Dalot and Aaron Wan-Bissaka. If one left, they would have moved for Dest. Both stayed. Therefore, Dest was left to weigh up an offer from Villarreal on Tuesday after coach Unai Emery phoned him to try to convince him of the benefits of a move.

Then, late on Wednesday, Milan's interest emerged after Alessandro Florenzi's injury at the weekend. With Champions League football on offer at the Serie A champions, an agreement quickly fell into place.

Dest, who made 71 appearances across two seasons with Barcelona, will hope to recapture his early form at the club under Ronald Koeman. A Clasico performance against Real Madrid stood out in a decent first season, but injuries and Koeman's departure halted his progress in his second campaign in Spain. -- Marsden

What is AC Milan getting in Dest?

Dest is capable of playing as either a left- or right-back in a four-man defense. There have been moments when he was used as a wing-back in a three-back alignment, but right-back is where he has looked most comfortable, and that appears to be the clearest path into the Milan lineup -- though Davide Calabria will have something to say about that.

Regardless of how he's deployed, he's at his best flying forward and getting into the attack, where he can combine with teammates, put in crosses or cut inside and have a strike at goal. Dest has shown, especially when shooting, that he is dangerous with either foot. His first goal for the U.S. in a 4-1 win over Jamaica saw him tally with his right foot. Later, in a World Cup qualifier against Costa Rica, he unleashed a shot into the top corner with a left-footed rocket in what would eventually be a 2-1 win. He's tidy on the ball too, completing over 90% of his passes in the attacking third during the last LaLiga campaign.

Sergino Dest is off to AC Milan after being told he no longer had a future at Barcelona. David S. Bustamante/Soccrates/Getty Images

Where Dest tends to struggle at times is on the defensive side of the ball, especially with his positioning. It's a weakness that could be camouflaged when he played in teams like Barcelona or Ajax, which tend to dominate possession. When the possession battle is more even, he can be exposed, though Milan is another team that tends to have more of the ball, having had 57% of the ball in games so far this season.

He has struggled with consistency as well, which in some ways explains why Barcelona manager Xavi seemed determined to replace him, be it with Dani Alves last season or Ronald Araujo/Sergi Roberto so far in the current campaign. But there have also been mixed messages from management, with Dest praised earlier in the summer for his versatility but now deemed expendable, in part due to the financial challenges the club faces.

Add it up, and it makes it difficult to assess Dest's current form. He didn't even make the bench in any of Barcelona's first three league encounters. -- Carlisle

What does Dest's exit mean for Barcelona?

Barcelona had been pressing Dest to leave for weeks. Despite informing him at the start of the summer that he was part of their plans, the club's financial situation forced them to change their stance in July.

The need to reduce the wage bill and raise funds to compensate for their spending, all while complying with LaLiga's financial regulations, trumped the desire to give Dest a chance to improve. However, letting Dest go is not without risk, as he was the only natural right-back in the squad. Sergi Roberto has played the position regularly in recent years, but is conventionally a midfielder. Centre-backs Ronald Araujo and Jules Kounde have both played there this season, too.

Therefore, Dest's move to Milan activated a move for Hector Bellerin, who was at the club's academy before joining Arsenal as a 16-year-old. He returns to Barcelona 11 years later after Arsenal agreed to rescind his contract on Thursday.

- Berhalter backs Pulisic to regain Chelsea place
- O'Hanlon: Does the USMNT have a goalkeeper issue given summer moves? (E+)

Despite that, there is a lingering doubt that the full-back positions are Barca's weak spot. While they need Bellerin to hit the ground running on the right, on the left they have the ageing Jordi Alba, who has been benched for 18-year-old Alejandro Balde so far this season. They have also added Marcos Alonso, acquired in the deal sending Pierre-Emerick Aubameyang to Chelsea, to provide further competition. -- Marsden

What does this mean for the World Cup hopes of Dest -- and of the USMNT?

Such is Dest's talent level that assuming he's healthy, he'll be on the final U.S. roster regardless of his playing situation. But his spot in the starting lineup could be under threat if minutes continue to be difficult to find in Italy. That's not to say the other right-back options in DeAndre Yedlin, Reggie Cannon, Shaq Moore or Bryan Reynolds offer as much as Dest does, especially in attack, but it would leave him more vulnerable to getting benched.

Certainly, the need to have Dest on the field isn't as great as it used to be. The emergence of Fulham's Antonee Robinson as the starting left-back gives manager Gregg Berhalter a more settled backline in terms of options, allowing him to focus on what Dest gives him out of the right-back position.

The hope is that the move to Milan allays any concerns and that Dest will head into the World Cup with the requisite level of sharpness. -- Carlisle