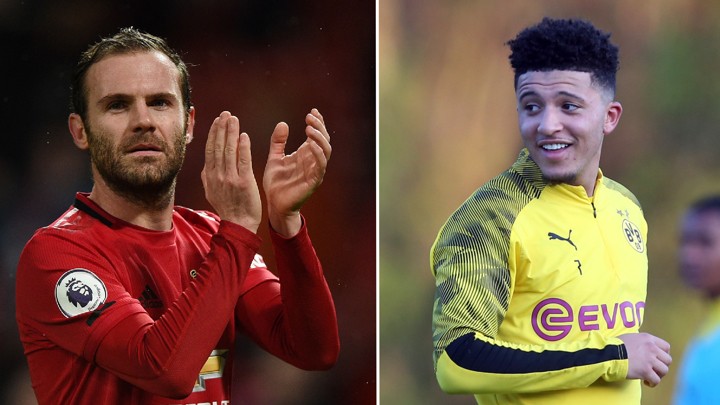 Sancho, 20, has been linked with a move to the Premier League after starring for Dortmund during the past two seasons.

Appearing on Instagram Live , Mata was asked about the England international, who is said to be a target for United.

"What do you want me to say?" he said. "We all know that he's a great player. He's having a fantastic season at Borussia, but you know it's not my responsibility to speak about those things.

"Of course, I like him as a player but I cannot reply to that."

Sancho had scored 14 goals and provided 15 assists in 23 Bundesliga games before the season was suspended due to the coronavirus pandemic.

Red Devils manager Ole Gunnar Solskjaer suggested earlier this week that the club are in a good position to "exploit" the transfer market when it does re-open with players potentially being sold for smaller sums.

"Football is going to get back to normality at one point, and it's very important we're ready when that happens," Solskjaer told Sky Sports.

"We want to be the best at everything, and of course now is a chance to spend more time, you discuss players, discuss plans, we've evaluated what we need, of course with the coaching staff we've looked at games, evaluated games, discussing on video calls like this.

"Then, the market, who knows how the market is going to react to this? Who knows which clubs need to sell players? There might be just a situation there where you can exploit, and I know that we at Man Utd we are one of the biggest, and the biggest, financially well-off.

"I'm sure we are capable, when we get back to normality, that we can do the business that we want to."

While Mata would seemingly be open to Sancho's arrival at Old Trafford, the Spaniard's focus has been on helping out during the ongoing health crisis.

“It’s been heartening to see many positive responses from players and other football leaders to the current crisis, but it can be also hard to know what to do to help effectively those who need it most. We are suffering a stark reminder of how interdependent we all are,” Mata said.

“To overcome coronavirus, and the other challenges facing humanity, we need to coordinate individual efforts and work together as a team.

“I’m urging not only my Common Goal teammates, but also all other players and football leaders from around the world to unite and help tackle this crisis, and at the same time use this as a catalyst to play a key role in tackling the other challenges humanity faces. Together we can beat this.”