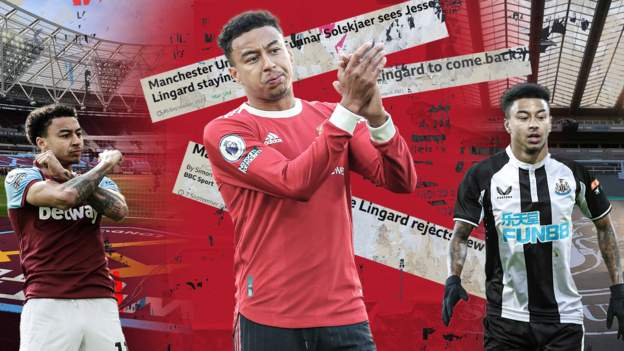 It has been quite a year for Jesse Lingard.

He started it firmly out of the picture at Manchester United but a loan spell at West Ham reignited his form and now he's providing assists for Cristiano Ronaldo and finding himself a wanted man in the Premier League again.

A return to the Hammers had appeared to be an option over the summer while Newcastle, fresh from their recent big-money takeover, are thought to be contemplating a move for the forward in January's transfer window.

The Champions League has seen the best and worst of Lingard this season and he will be hoping to get another chance to make an impression when Manchester United host Atalanta on Wednesday evening.

But does Lingard - who is out of contract next summer - see his long-term future at Old Trafford? Or would he be better off heading elsewhere?

Lingard making an impactJesse Lingard, centre, won player and goal of the month while at West Ham

Ask Lingard himself and he will probably say that moving to West Ham in the January transfer window was the best move he could have made.

The 28-year-old had made just three appearances for Manchester United last season - all in cup competitions - but at the Hammers he quickly became an integral player for a side battling for the Champions League spots.

Lingard scored an impressive nine goals from February onwards during his 16-game spell at David Moyes' side, also chipping in with five assists.

But despite that excellent form it still appeared difficult to see a future for him on his return to Manchester United, particularly with Bruno Fernandes playing in his favoured position and the summer arrivals of Ronaldo and Jadon Sancho adding to the competition for places.

His cause was seemingly not helped with a costly mistake against Young Boys in last month's opening Champions League group stage match; his poor back pass handing the Swiss side an injury-time winner.

But that has proven to be a blip in an otherwise good run of form, albeit as something of a super-sub.

Four of his last six appearances for Manchester United have been off the bench and during that time he has scored twice and set up one goal - Ronaldo's last-minute winner against Villareal in their second Champions League game.

Under Ole Gunnar Solskjaer, someone who as a player also earned the reputation as a super-sub, Lingard clearly has a role to play at the Red Devils.

It would appear that, however, is not how Lingard sees himself, having recently rejected a new contract and expressed concerns about how much game time he is going to get.

At 28, Lingard is in his prime and arguably at the peak of his desirability for other teams.

His resurgence, first at West Ham and latterly as a sub at United, has brought him back into England consideration after almost two years out in the international cold but, in the long term, Lingard will know Three Lions boss Southgate favours players who are regulars with their club.

At United, though, he is at a club he has been a part of since he was a child, while the arrival of Ronaldo has given him the chance to play alongside someone he idolised as a youngster.

Former Manchester City defender Micah Richards says the grass is not always greener on the other side.

Speaking to BBC Radio 5 Live, Richards said: "It is a time at Manchester United where they believe they could genuinely challenge, so why would you not want to stay and be a part of that? I would rather be a part of something special than go for game time elsewhere.

"I made the choice to leave Manchester City and go to Fiorentina. I went there and played 20 games, got injured, went to Aston Villa. Got relegated. Then I was fighting in the Championship to get back to the Premier League.

"It might not be his journey but I wish I had stayed at Manchester City to be a part of it. It was perfect."

Former Everton and Scotland midfielder Don Hutchinson believes Lingard will have a difficult decision to make though.

He told BBC Radio 5 Live: "He has a future at Man Utd, but what does he see his future as? I don't think he is going to start many games. Bruno is their best 10 and that is Jesse's best position.

"I think Lingard might get his minutes, but he is proving to everyone he is back. If he keeps playing the way he is playing, teams like Everton, Tottenham and West Ham will want him, because he is so good at what he does.

"He turned down a contract at United and that shows what he is thinking. Ole will want to keep him but he will have a lot of teams chasing him."

What does Lingard want to do?Jesse Lingard, left, has been back in the England squad following his good form at club level

By his own admission, this season is a fresh start for Lingard.

The loan spell at West Ham seems to have reinvigorated him both as a player and a person and, for now, he appears determined to make his mark at Old Trafford.

Solskjaer said before Saturday's defeat by Leicester City: "Jesse has had a good start to the season - he's come on and scored a few goals. He knows what we want - we want to prolong his contract.

"He is an important player, he deserves to play more. Hopefully we can get a deal sorted because we really rate him."

However, Lingard recently said in a piece for The Players Tribune: "What you saw at West Ham was the player I can be when everything is coming together. Let's say it was an upgraded version of the old Jesse Lingard - Jesse 2.0.

"I don't want to be the player who does well for just a few weeks or months. I want to show how many goals and assists I can get over 30-plus games."

But will he get those 30-plus games at Manchester United this season? Time will tell.