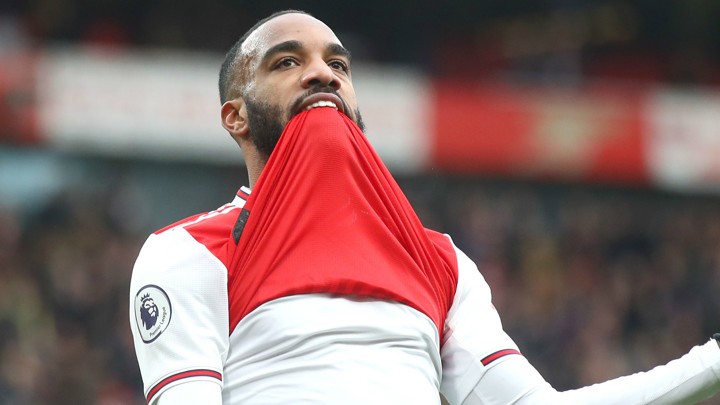 It has been just over a year since Alexandre Lacazette was named Arsenal’s 2018-19 Player of the Season.

Voted for by supporters, the France striker comfortably walked away with the award having amassed 35 per cent of the vote.

It was clear acknowledgement of an excellent season for Lacazette, especially when you consider his strike partner Pierre-Emerick Aubameyang finished the campaign with 31 goals in all competitions and won the Premier League Golden Boot.

There might have been some outside Arsenal who were surprised that Aubameyang had been overlooked, bit there were few complaints from those in and around the club.

Lacazette scored 19 goals himself and, perhaps more importantly, provided 11 assists for team-mates. He was the focal point of Arsenal’s attack; the man who made things tick, who brought others into play.

There were goals against Tottenham, Liverpool and Chelsea in the Premier League, plus strikes home and away in the Europa League wins over Napoli and Valencia. When Lacazette played well, Arsenal played well.

“He is vital,” former Gunners defender Bacary Sagna told Goal when asked to describe his countryman. “He is the type of player who gives everything for the team.

“Of course you always see the one scoring the goals, like Aubameyang - who is a goalscoring machine - but the amount of work Laca puts in is amazing.

“In front of the goal he is clinical, but most of the time he has his back to the goal. When he receives the ball, he is trying to protect and defend the ball for other players. He is getting kicked for his team-mates and this is why, for me, he is vital to the Arsenal system.”

After two years in the Premier League following his arrival from Lyon, it looked like Lacazette had mastered the art of English football and would go on to even better things during his third campaign at the Emirates Stadium.

But the 2019- 20 season has not gone to plan for Lacazette. So much so that there are many who now believe that, should the opportunity arise this summer, Arsenal must look to cash in on a forward who has two years of his contract remaining.

So what has happened in the space of a year for opinions to have switched so drastically? Why do so many feel that a player, who just 12 months ago was named Arsenal’s Player of the Season, needs to move on?

A major factor in Lacazette’s problems this season has been the injury he picked just before it kicked-off in August.

Playing against former club Lyon in the Emirates Cup, the striker twisted his ankle and had to be replaced before half-time. He recovered enough to be an unused substitute for the win at Newcastle on the opening weekend of the season two weeks later before finding the net in Arsenal’s first two home games of the campaign, against Burnley and Tottenham.

But it was after the north London derby, which took place on September 1, that Arsenal announced that Lacazette had been ruled out due to an "ongoing ankle issue", which he had been playing through for "several weeks".

He did not return until the defeat at Sheffield United six weeks later, and the frontman has been searching for his best form ever since.

Since returning in October, Lacazette has scored just seven goals, with none coming away from home in the league. In fact, since scoring twice in the 5-1 win at Fulham in October 2018, Lacazette has registered just one Premier League goal away from the Emirates.

He did score four times in four games during November and December, but then endured a run of nine games without a goal before finally scoring in the 4-0 drubbing of Newcastle on February 16.

Speaking after the game, Lacazette described his barren run as "hard and complicated".

“For a striker it is always hard to not score, but it happens in football,” he said. “Hopefully it is the last time for me.”

Despite his struggles this term, Lacazette remains a hugely popular member of Arsenal’s squad - something that was highlighted by the way he was mobbed after breaking his duck against Newcastle.

“I was touched because of the way all my team-mates reacted when I scored that goal,” said the 29-year-old. “It meant a lot to me.”

After scoring against Newcastle, Lacazette went on to net in wins against Olympiacos and West Ham before the Covid-19 pandemic brought football to a halt. But it was Eddie Nketiah again who started up front in Arsenal’s final three home league games before the suspension, with the French forward having to make do with a place on the bench.

“I have two strikers at the moment and they are making life difficult for me, but at the same time it is very good," said Mikel Arteta after Lacazette had come off the bench to earn a late 1-0 win against West Ham.

“I decided to play Eddie [against West Ham] for the defenders they had and the game-plan we had, but knowing that Laca, if we needed a goal in the final moments, was always ready to do that.”

Lacazette’s upturn in scoring form just before the shutdown will give Arsenal fans hopes that he will be able to hit the ground running again when the Premier League returns on June 17.

But his attempts to wrestle his place back from Nketiah will not have been helped with an incident during the lockdown which saw him plastered across the front page of a national newspaper appearing to inhale gas from a balloon.

Arsenal were quick to react to the story. “This is a private matter which we are taking seriously,” a statement released by the club said. “It will be handled internally.”

It is understood that Lacazette was fined two weeks wages by the club, and it is the type of incident that will not have gone down well with Arteta, who demands a lot from his players - both on and off the pitch.

Time will tell whether Lacazette now has to win back the trust of the Spaniard, but with Arsenal potentially having 13 games left this season, how the striker performs over the next couple of months could be key in terms of his long-term future at the club.

With money expected to be exceptionally tight this summer due to the financial implications of Covid-19, clubs may have to work slightly differently in the transfer market. Swaps deals are set to become far more common, and with Arsenal holding a strong interest in Atletico Madrid midfielder Thomas Partey, it could be that Lacazette - who has long been eyed by Rojiblancos boss Diego Simeone - comes into the equation as part of any deal.

Lacazette’s contract expires in 2022, and Arsenal do not want another of their star men to enter the final two years of his deal without having signed an extension. The club will want to ensure they do not get into the same position they are currently in with Aubameyang - who has under 12 months of his deal remaining - so a firm decision over Lacazette’s future will need to be taken.

A year ago it would have been farcical to think that Arsenal would even consider selling Lacazette, but football moves quickly, and Arsenal’s reigning Player of the Season, who is also said to be attracting interest from Inter, now stands at a crossroads in his career.