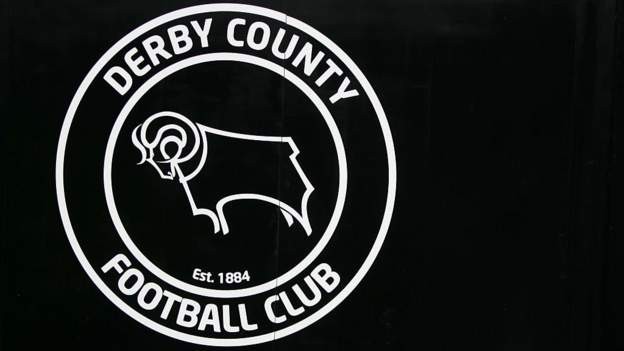 Derby County currently sit 18th in the Championship table under Wayne Rooney's management, but were in the bottom three when he took over

Derby County entertain old rivals Nottingham Forest at Pride Park on Friday with a spring in their step.

Wayne Rooney's appointment as permanent manager on 15 January triggered a revival in fortunes that has brought the Rams six wins in nine Championship games, something they never achieved under former boss Phillip Cocu and managed only once in 2018-19, when Frank Lampard took them to the play-off final.

Had that form been replicated across the entire campaign, Derby would now be second, chasing automatic promotion and a return to the Premier League that has proved so elusive since they were relegated with a record low points total of 11 in 2008, a period that includes four failed play-off campaigns between 2014 and 2019.

Yet for all the on-field optimism, concern is acute about what is happening away from the pitch; about a £60m takeover yet to be completed, loans of unknown size that bring unease about how they will be paid back and uncertainty over where the club is heading.

Sale agreed but still to be completed

On 6 November, Derby announcedexternal-link an agreement in principle had been reached by owner Mel Morris and Derventio Holdings (UK) Ltd for the sale of the club. A submission to the Football League's owners and directors' test had been approved, it was stated, and the transaction would be closed "very soon".

This was good news for all parties.

Morris - having spent £200m without gaining promotion - had been trying to find a buyer for a number of months. In Derventio's ultimate owner, Sheikh Khaled and his Bin Zayed Group, Derby fans would be getting a cousin of Manchester City owner Sheikh Mansour.

While it was stressed Sheikh Khaled would not be spending anything like the same amount his relative had lavished on City, it appeared Derby were in good shape to move forward.

Despite assurances before and after Christmas that completion was imminent, Derby remain unsold.

Rumours have been rife over why this is the case. Sheikh Khaled previously tried to buy Liverpool and failed to complete a very public attempt to purchase Newcastle United in the summer of 2019 amid question marks from owner Mike Ashley about the true extent of his wealth.

One current suggestion is that Sheikh Khaled is trying to find alternative sources of funding.

If this is correct, another submission would need to be made to the English Football League (EFL), so it can be satisfied that both the source of the new funding and the actual funder meet its owners and directors' test.

No official reason has been given for the delay - or whether there is a cut-off date for the deal to go through.

A source close to the Sheikh refused to elaborate, on or off the record, when asked. Derby also declined to comment.

BBC Sport has been told that the way the agreement is set up means neither party can walk away.

Despite being the prospective owner rather than the actual one, Sheikh Khaled was involved in the discussions that led to Rooney being appointed manager permanently on 15 January.

He was also part of the discussions about the loan signings of five players on deadline day, including defender Teden Mengi from Manchester United and striker Patrick Roberts from Manchester City.

However, until something changes, Morris remains in charge and responsible for Derby's finances.

Having Morris at the helm, in itself, is not an issue.

Now 65 and not in the best of health, he assured fans in a recent interviewexternal-link he would keep the club afloat until the takeover is complete.

The issue comes from the complicated nature of the club's ownership structure, concern over its financial state, loans around Pride Park and the on-off nature of talks with other potential buyers.

BBC Sport has been told about other parties who are interested in buying the club.

But when one potential purchaser spoke briefly to club executives they received no encouragement to continue talks - a buyer, this person was told, had already been found in Sheikh Khaled.

Given due diligence would need to be carried out, a purchase from scratch at this stage would not be a speedy process.

Then there is Swiss/Turkish financier Henry Gabay, who, through his private equity firm, agreed a deal to lend Derby money last year with a view to buying the club - only to subsequently withdraw his interest.

Various rumours have surfaced around Gabay's continuing involvement but BBC Sport has been told none are true and that - while he did leave his loan in the club for a short amount of time - it has subsequently been paid back; was nowhere near the £81m that has been suggested;external-link and that he has no involvement in Derby.

Gabay, BBC Sport has been told, has not entirely dismissed the idea of making another offer on behalf of his investors, but would want far greater clarity over the club's affairs.

Uncertainty over the financial picture

In August 2020, Morris took out the first of what is understood to be at least two loans with MSD Holdings, the same company that lent money to Premier League duo Burnley and Southampton, against the stadium.

The total amount owed is uncertain and estimates vary wildly, but the stadium is owned by Morris after he bought it from Derby for £81m in 2018 as a way of ensuring the club did not break EFL profit and sustainability rules.

Derby were charged but cleared of all the major allegations concerning the spending rules, although the EFL appealed on the lesser one, and BBC Sport has been told a final decision could come next month.

The appeal has been given - in the knowledge of Companies House - as the reason why the accounts for the football club remain outstanding, having been due by June 2020.

Within the 2017-18 accounts and the written reasons around the EFL case, a confusing picture emerges.

A loss of £38.73m is forecast for the 2018-19 financial yearexternal-link but fans will not know whether that became reality until the accounts are published.

On 5 February, the 'Rams Group' of concerned supporters released a statement calling for the present takeover impasse to be brought to a close "one way or another before it continues to seriously harm the club's future".

They have received no response, although the club understand the anxiety that has been created and do intend to reply at some stage.

In the meantime, Sheikh Khaled's takeover remains incomplete and there is no evidence of a plan B.

Rooney has made an encouraging start to life as Derby manager. Whether the club can provide him with the solid financial base he needs to mount a push for promotion is far less clear.