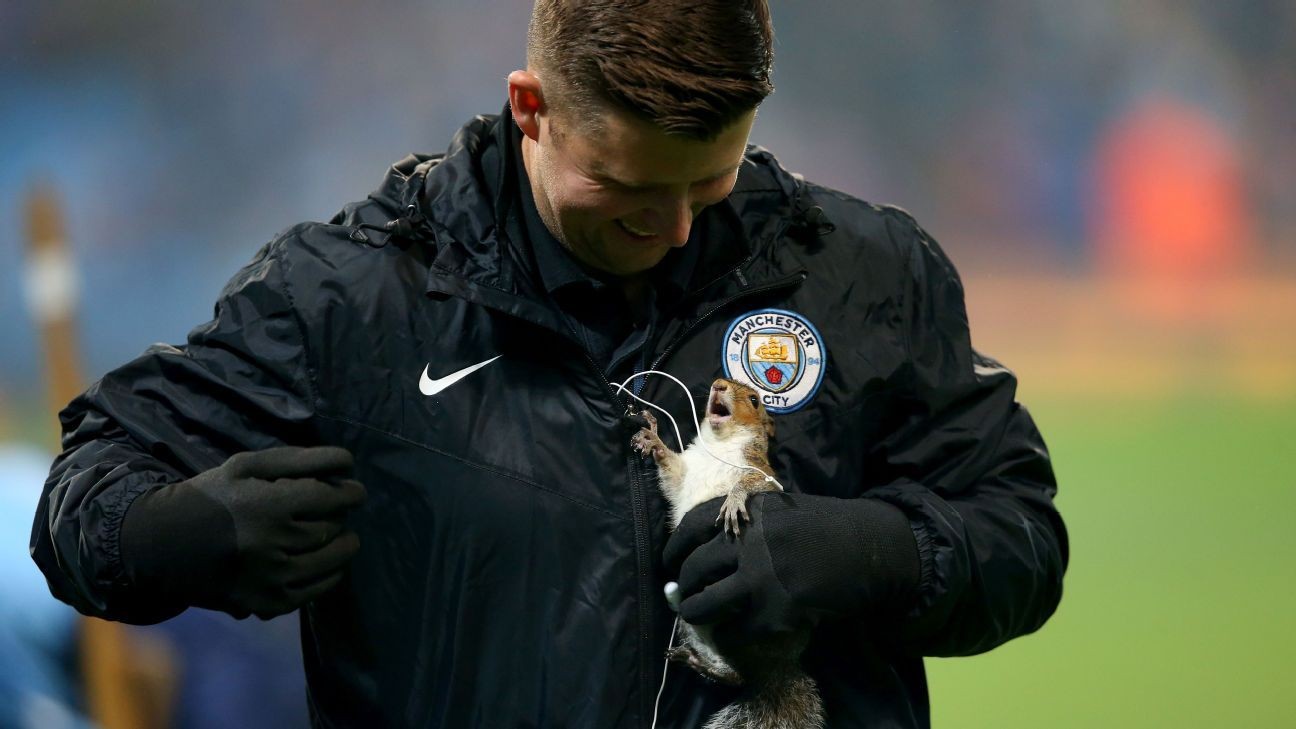 When you've been watching football for as long as we have, it's easy to get lulled into thinking you've seen and heard it all before.

However, when an international training session has to be temporarily halted due to a marauding parrot, you quickly realise that the beautiful game still has plenty of fresh nonsense left up its metaphorical sleeve.

Son joins host of greats in Premier League's 4-goal clubIbrahimovic, Henry, Fabregas and the stars who decided to 'go back'Zlatan in Ireland? Shamrock vs. AC Milan the latest minnows vs. giants clash in Europe

As the Brazil women's national side limbered up at the weekend, their tune-up game had to be stopped when a macaw landed directly on the head of player Bruna Benites.

The bird was eventually coaxed from Benites' hair and made its getaway but not before it flew the length of the pitch and perched on a goal net for a couple of minutes. Play was resumed shortly thereafter.

And so we offer a timely salute to those wonderful animal interlopers who have come bounding into the spotlight, beginning with a couple of other examples that have occurred in the past few days.

Absolutely FABULOUS. There was a snake wandering around at the game between FC Botosani and Clinceni. In the most unusual place on the planet! Romanian football is FANTASTIC. pic.twitter.com/yXW6m9ZBNj

If there's one animal you don't want to accidentally step on while darting down the wing it's a rogue snake, like the one spotted slithering across the pitch during the recent Romanian match between FC Botosani and Clinceni.

Ilkley Town AFC vs. Carlton Athletic is held up by a free roaming Alpaca running on the pitch.

It's not every day that an alpaca stops play, but that's precisely what happened during Carlton Athletic's English non-league game against Ilkley Town at the weekend.

The fluffy pitch invader, named Oscar, made his way onto the pitch five minutes before half-time after escaping from a nearby farm and made several clever runs into space before being ushered back to his pen.

A stray dog earned praise for its ball handling from a live TV commentator after it ran on the pitch and disrupted a professional Turkish soccer match https://t.co/V2KJ8JeDZR pic.twitter.com/sarCVwAqJ0

Of course, dogs are by far the most common example of the mammalian pitch invader with another tale of a curious canine stopping play cropping up every few months or so.

Our favourite recent example has to be the gifted pup who interrupted a game in Turkey and then proceeded to demonstrate better ball control than most of the human players involved.

Everyone who watches South American football loves a dog on the pitch but what about the one in Ecuador that saved a penalty...pic.twitter.com/Ujq5ZlWMRf

You've simply got to respect the flawless timing of the dog who successfully crept onto the pitch to save a penalty during an amateur game in Ecuador.

Indeed, the sight of an overexcited dog hurtling out onto the pitch is now so commonplace in South American football that broadcasters are even affording them postmatch interviews.

Cats have also done a roaring trade in pitch invasion over recent years, with some becoming fleeting viral celebrities in their own right.

For instance, the tabby who came slinking onto the pitch during a game between Liverpool and Tottenham Hotspur in 2012 was instantly christened "Anfield Cat" and had hundreds of Twitter fan accounts opened in their name.

EVERYONE THERE IS A CAT ON THE PITCH! 🚨 pic.twitter.com/qGxp8oCYlj

Famed for their agility, it was no surprise to see a deft under-lapping run from this feline encroacher during a 2019 Leagues Cup clash between Real Salt Lake and Tigres.

To say Andre-Pierre Gignac was stunned is an understatement.

The precursor to Anfield Cat, the only thing preventing the legendary Highbury Squirrel from becoming a huge viral superstar in his own right after Arsenal's 2006 Champions League tie against Villarreal was the unfortunate fact that social media didn't really exist at the time.

Manchester City's Etihad Stadium had its own bush-tailed visitor in 2017, before a Carabao Cup tie against Wolves. The squirrel went scampering across the turf as the City players were warming up, nimbly evading capture at every turn. Thankfully, the staff did finally manage to apprehend the interloper, only to discover that it was in fact a vocal City supporter.

BUZZING to announce our new signing to haSTINGS!

The crowd swarmed to The Pilot Field as we continue our pitch works!

While fluffier critters can usually be easily persuaded to leave, a little more concerning for players is the sight of a swarm of bees descending upon your pitch.

Not what I was expecting to be doing this morning trying to collect a swarm of bees. pic.twitter.com/2BNBkux0Md

However, that's exactly the reality that the ground staff at non-league side Hastings United were forced to deal with while attempting to relay their turf back in May. Ha-STINGS by name, etc, etc...

Thankfully, it all went a little smoother than the time a more aggressive swarm invaded a Tanzanian game between Young Africans and Iringa United and promptly set about attacking all of the players from above.

It would appear bees have no respect for reputation either, with Dani Alves once succumbing to a volley of stings after a swarm made their irritating presence felt during a Sao Paulo match last year.

"Not even the bees are with us, brother!" the Brazilian star wrote on Instagram after the game while sharing photos of his ordeal.

As well as bees, several other notable insect invaders have become breakout stars after dabbling in the world of football.

We've had James Rodriguez and his giant locust, Cristiano Ronaldo and his tear-supping moth and the massive cloud of midges that almost scuppered England's 2018 World Cup game against Tunisia.

It would appear bees have no respect for reputation either, with Dani Alves once succumbing to a volley of stings after a swarm made their irritating presence felt during a Sao Paulo match last year.

"Not even the bees are with us, brother!" the Brazilian star wrote on Instagram after the game while sharing photos of his ordeal.

As well as bees, several other notable insect invaders have become breakout stars after dabbling in the world of football.

We've had James Rodriguez and his giant locust, Cristiano Ronaldo and his tear-supping moth and the massive cloud of midges that almost scuppered England's 2018 World Cup game against Tunisia.

Giving bees a good run (fly?) for their money in the "most aggressive animal pitch invader" stakes is the wild pine marten who ran amok during the Swiss Super League game between FC Thun and FC Zurich in 2013.

Not only did Marten bring the encounter to a screeching halt, it also managed to bite one of the players (Loris Benito) and draw blood.

This duck went streaking on the pitch at Rio Tinto Stadium last night. He gave the @RealSaltLake grounds crew a run for their money. Nice assist from Albert Rusnak on the capture of the bird. #MLS @KSL5TV @SportsCenter pic.twitter.com/Fzl7JqJ5aZ

Obviously a mecca for animal pitch invaders, Real Salt Lake saw a match temporarily suspended in 2018 while a confused duck was removed from the side of their pitch.

Proving to be one heck of a physical midfield general, the cow that invaded a local game in India last year just could not be shaken off the ball.

The bovine bruiser obviously learned all he knows about commanding the middle of the pitch from his bigger Bulgarian cousin.

Back in 2017, the Welsh lower-league tie between CPD Llanberis and Llandudno Junction FC was momentarily impeded by a pair of pitch-invading -- and excessively wooly -- hooligans.

Play was stopped midway through the Alliance League Division One match when a couple of sheep came galloping onto the paddock.

A HORSE WALKS INTO A GROUND | No, we're not sharing jokes, this has to be one of the strangest moments at Woodhorn Lane when a horse decided to join us to watch a fantastic 7-3 win back in 2014.#ShareYourMemories pic.twitter.com/wKu3euJyCE

Not all animals are pitch-invading hoodlums, as duly proved by the extremely polite horse who travelled from a nearby field to watch his local non-league side Ashington FC from the terraces.

We've had to stop training because of some stags👀😂 pic.twitter.com/TpEPXtMGwL

Definitely not one you see every day, Scottish lower league side Fort William FC were forced to stop a training session last year because two stags decided it was the perfect place to stage their rutting battle.