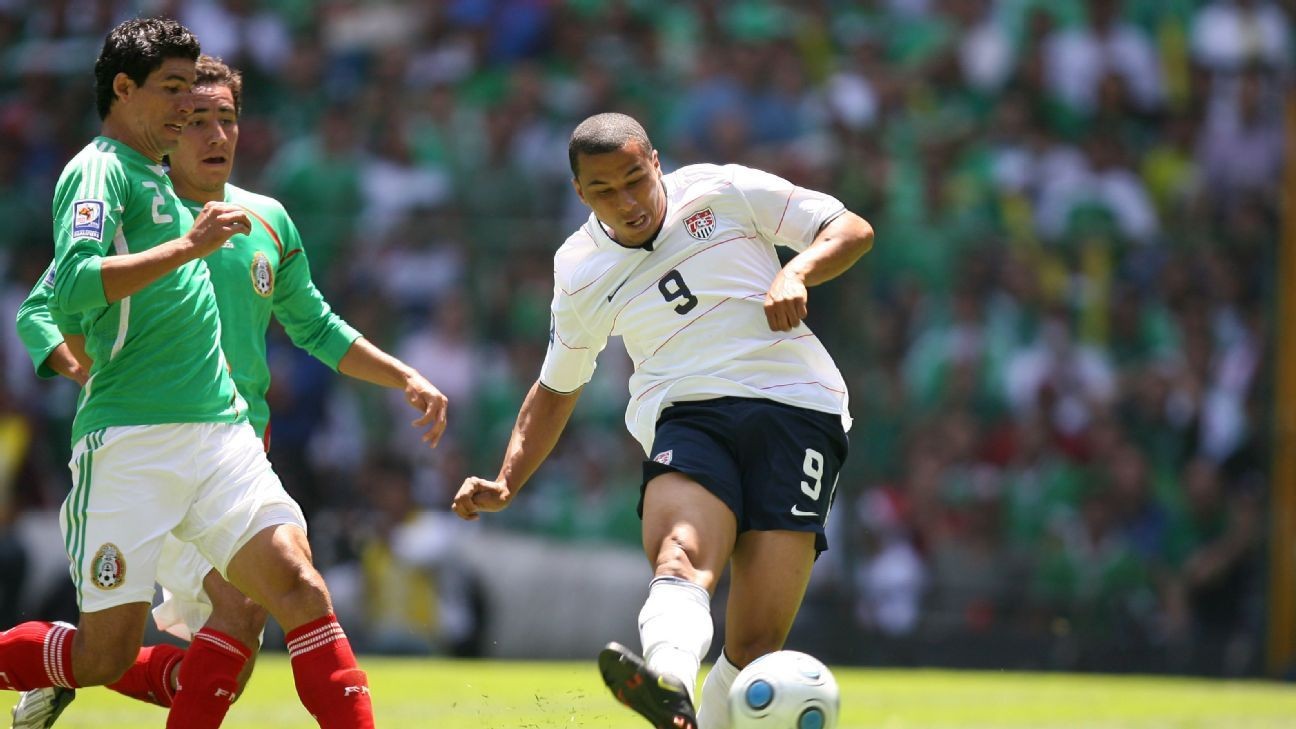 It exists on what can seem like a mythical plane, with an aberrational combination of history, decibels and lack of oxygen leaving the Estadio Azteca peerless in North America. As just one of two stadiums to host the World Cup final twice, along with Rio's fabled Maracana, few soccer venues can even remotely compare to Mexico's home ground.

Stories passed down through generations of the United States men's national team only enhance that perception, and their performances at the Azteca certainly don't dispel it. In eight World Cup qualifying matches spanning five decades, the U.S. has never left the Azteca, nestled in the southern stretches of Mexico City, with a win.

"I think we built it up to be this almost impossible place to get a result," said former USMNT striker Charlie Davies. "If you got a draw, it was huge. It was almost like a victory and for me, it was the game I literally dreamed of playing in since I was a little kid."

Heading into Thursday's renewed (10 p.m. ET, follow LIVE with ESPN) fixture at the iconic setting, the stakes for both teams couldn't be much higher. The United States and Mexico enter the final three-game window of World Cup qualifying tied for second in the CONCACAF standings, both with work to do to ensure safe passage to Qatar 2022.

For the U.S., a loss could leave the team with a razor-thin margin for error with games against fourth-place Panama and fifth-place Costa Rica remaining. Mexico's remaining schedule (at Honduras; vs. El Salvador) is more forgiving, but a loss would be historic on two fronts: It would be El Tri's first-ever loss to the U.S. in a competitive match at the Azteca and mark the first four-match losing streak in a rivalry played since 1934.

Before heading to Azteca for a qualifier in 2009, multiple U.S. players pulled Davies, then 23, aside. "They told me, 'This is the big one. You'll never play in another atmosphere quite like this,'" Davies said. "You might play in a stadium as big. You might play in front of this many people, but the hostility is second to none.

"It's the only place I ever played in where you could scream at the top of your lungs to someone who is five yards away and they can't hear you."

In a 2009 World Cup qualifier, Charlie Davies once did the unimaginable -- give the USMNT a lead at the Estadio Azteca. Andy Mead/YCJ/Icon SMI/Icon Sport Media via Getty Images

Davies got the "full Azteca" experience. The team, managed by Bob Bradley at the time, flew in the night before the game and the players were instructed to use fake names when checking into the hotel. The idea was to mitigate unwelcome wake-up calls from Mexican fans, a tactic they'd been employed in the past to disrupt their rivals' preparation. Still, an unofficial welcoming committee found their way in the lobby that night with airhorns and a symphony of car horns played outside circled the hotel all night.

"It was just to get your focus off the game and to all these other things," Davies said.

Among world soccer's most impressive venues, the Estadio Azteca can be among its most imposing. Andy Mead/YCJ/Icon SMI/Icon Sport Media via Getty Images'Obligation for perfection'

Starting with the result in 1997, the United States-Mexico games at the Azteca in World Cup qualifying have all been competitive. The U.S. still hasn't won there, but it has three draws in their last six trips while the other three losses have all been by one goal -- and in two games, the U.S. scored first.

"There was a lot of pressure," said former Mexican striker Jared Borgetti about playing against the United States. "I didn't have very many national team games. I didn't have that much experience in those kinds of [World Cup] qualifiers."

Borgetti, who had yet to face the United States in an official competition before the 2001 qualifier, said there was "obligation to do things, very nearly, to perfection." A crowd of 110,000 roared when 16 minutes into that match, Borgetti latched onto Alberto Garcia Aspe's cross off a free-kick and knocked it in -- a goal Borgetti recalled was "very tough" to score.

"The games that always have something particular about them, something challenging," Borgetti added. "Obviously, they leave you with a nice feeling, outside of whether you win or lose."

Efrain Juarez, who played in several key matches against the U.S. over the years, recalls that the 2009 edition was "not a normal game." Why? Because he and his teammates watched themselves eating breakfast on national TV as helicopter cameras zoomed in on the team hotel.

For Jared Borgetti, the pressure to beat the U.S. at the Estadio Azteca was immense. Brian Bahr/Getty Images'Too tired to celebrate'

Much is made about the altitude in Mexico City. At roughly 7,200 feet above sea level, there isn't a perfect solution to adequately prepare for the toll the relative lack of oxygen takes on unaccustomed lungs.

Prior to the trip to the Azteca in 1997, United States coach Steve Sampson got creative. The team spent two weeks near Big Bear Lake in the San Bernardino Mountains outside of Los Angeles, which sits at a similar altitude as Mexico City. At night and in the morning, the players' bodies would naturally acclimate, but they would also bus two hours away to the city of San Bernardino each day to train in a hot, smoggy environment -- another exercise conducted to mimic the conditions they'd experience at the Coloso de Santa Ursula.

"It's impossible to say it didn't help, we must have gotten something out of that," said former USMNT forward Eric Wynalda. "That was the only explanation for how we were able to run as hard and long as we did because we had just spent two weeks in hell."

Does a scoreless draw ever feel like a victory? For a U.S. squad in 1997 that broke a 19-game losing streak at the Azteca, it sure did. T. Quinn/WireImage

At that point, the United States had played away against Mexico 19 times, including competitive games and friendlies. They were 0-19-0.

Wynalda started the 1997 game playing on the left side in midfield, but had to drop to left back when Jeff Agoos was sent off with a first-half red card. After a run of play that required Wynalda to sprint up the field in attack, then track all the way back, he was completely spent.

"I run back and I tackle the ball out of bounds. I came over to the post looked right at [goalkeeper Brad] Friedel and threw up on his feet," Wynalda said. "His response was, 'Well, now you're playing Waldo.' And I was like, 'I hate this.' That place will make you spin anyway because you can't breathe."

Wynalda was subbed off in the 71st minute -- the game locked at 0-0 -- and as he started to jog to the sideline, his teammates encouraged him to slow to a walk. They needed every chance they could to catch their breath, and the U.S. saw out the 0-0 draw to pick up their first-ever qualifying point in Mexico.

"When we got in the locker room -- what an amazing result -- we were too frickin' tired to celebrate," Wynalda said. "We knew we had done something that never been done before but it was also just like, 'I'm so glad that's over with.'"

'I'm not wasting oxygen on you'

Tim Howard played a long ball into midfield. The ball popped to Landon Donovan in the center circle and after taking a touch around an El Tri player, he slotted a perfectly weighted diagonal ball into space for Davies. Following two clean touches, he beat Guillermo Ochoa to the far post.

Why celebrating USWNT's equal pay settlement may have been premature6dSteven Bank, special to ESPN.comUSL can produce Mexico's next 'Chicharito' -- and put MLS, Liga MX on notice1dCesar HernandezProjecting Mexico's World Cup roster: Who joins Lozano, Ochoa, Jimenez on the plane to Qatar?4dCesar Hernandez

"He gets in the space and we couldn't stop him because he was so quick," said Juarez, who would later in the match get the assist on the game-winning goal.

"I felt like I teleported out of my body. It was really an out of body experience," Davies said. "I had always worked with a goal in mind that one day I could play in this match and here I am playing in it, in Azteca, with all the history with all the players that have played on that same pitch, I scored for my country."

The deafening crowd was left silent. Davies went to the corner flag to celebrate, but only Bradley joined him before it started raining bottles, coins and batteries. "At halftime, I remember going over to [Oguchi Onyewu] and was like, 'Hey, man, how come you didn't come celebrate?'" Davies said.

play0:57Paul Arriola recounts getting doused with beer by Mexico fans

Paul Arriola remembers getting doused with beer by Mexico fans while watching a Gold Cup final as a teenager.

But the U.S. squad soon wilted under the afternoon heat, with Israel Castro equalizing by halftime. Then, in the 82nd minute, Juarez's moment of redemption when he got a deflected pass off to Miguel Sabah for the game-winner. The roar of the 105,000 fans in attendance was something, Juarez says, remains unforgettable.

"I've played many, many years. Many big games with massive crowds, but that goal was special because the sound [from the crowd] is crazy."

Juarez recalls walking past an exhausted Donovan, who had attempted to close him down in the run-up of the goal.

"I know how you feel when you're not used to that situation [in the high elevation]. I saw his face, like two to three minutes before, I saw that he was struggling," said Juarez, mimicking the way Donovan was catching his breath.

As often is the case for a big win against the USMNT, Mexico fans party into the night and gather at the famed Angel de la Independencia monument. And despite helping Mexico effectively seal a berth to the 2010 World Cup, Juarez made for an early evening.