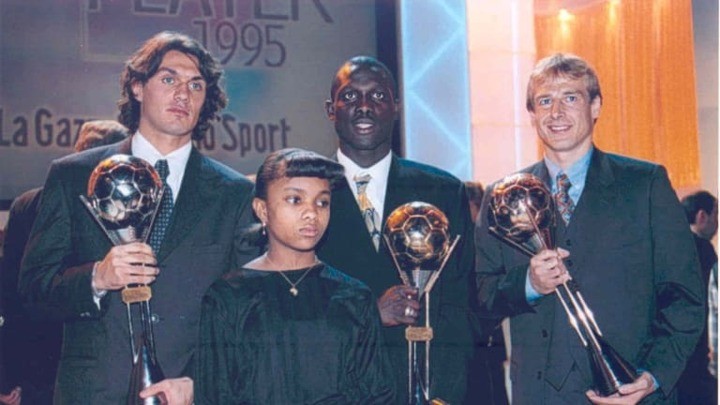 On 16 December last year, Timothy Weah tuned up for Lille’s meeting with Paris Saint-Germain a few days later by scoring a superb goal against Dijon. In the post-match press conference the forward was asked if his father, George Weah, would be in the stands to watch his son take on his former club.

“No chance!” came the reply. “My father doesn’t even know we’re playing Paris.” There was one very good reason for that: Weah Sr has a country to run.

Elected president of Liberia in January 2018, the former goalscorer made history time and again during his career. It was 25 years ago today, for example, that he became the first and only African to be voted FIFA World Player of the Year [now The Best FIFA Men’s Player award].

“When I was a child I dreamed of becoming a professional footballer,” he told FIFA.com at the time. “That was my ambition. I wasn’t thinking about winning the Ballon d’Or or the FIFA World Player of the Year award. I wanted to make a living from playing football and to go as far as possible.”

The starting point for Weah’s long and arduous journey to stardom was the Liberian club Mighty Barrolle. His next ports of call were Invincible Eleven, based in the country's capital, Monrovia, and Cameroonian outfit Tonnerre Kalara Club. In 1988, he made the move to Europe and Monaco, having been spotted by Arsene Wenger. Weah would pay tribute to the French coach for the rest of his career.

When he collected his FIFA World Player of the Year award on 8 January 1996, Weah invited Wenger to come on to the stage and present him with his medal.

“He changed my life. I owe him everything,” the Liberian president said of Wenger recently. “He’s like a father to me. I lost mine when I was young and Arsene, who was the only person to see something in me at the start, took over from him and never ever let me go. He’s always been right behind me, especially at the start.”

Weah spent four seasons in the principality before signing for Paris Saint-Germain. A French league champion with PSG in 1994, he virtually swept the board the following season. As well as winning the Coupe de France and League Cup, Weah was the top scorer in the 1994/95 UEFA Champions League and was also named African Footballer of the Year and the Ballon d’Or winner, to go with his FIFA World Player of the Year accolade.

“I was driven by my passion for the game and nothing else,” said Weah, who beat Paolo Maldini and Jurgen Klinsmann in the voting that year. “Those trophies have a special value, though. They’re a form of recognition for all the hard work I put in during my career.”

The next chapter in his storied career came at AC Milan, where he won Serie A titles in 1996 and 1999 and scored a number of wonder goals. The most memorable of them all was a stunning box-to-box solo effort against Verona. Weah then left Milan for spells with Chelsea, Manchester City, Olympique Marseille and Al Jazira, before retiring in 2003. Regularly in the spotlight at club level, the striker rarely had the chance to shine with Liberia on the international stage.

“I’m proud of where I come from,” said Weah, who was part of a Lone Stars squad that missed out on what would have been a historic qualification for the 2002 FIFA World Cup Korea/Japan™ by a solitary point. “I love my country and I love my compatriots.

"It goes without saying that I would have loved to have played at the World Cup. The only thing that saddens me, though, is that there are lots of other Liberian players who didn’t play at the tournament either but didn’t have the success I had.”

After hanging up his boots and putting the disappointments of his international career aside, Weah set about the task of helping his country by moving into politics. In December 2014, he became the first sportsperson to be elected to the Liberian senate and went on to chair the nation’s Committee on Sport. Having reached the highest office in the land and the pinnacle of world football, the Liberian legend has not forgotten the words he said on collecting his FIFA World Player of the Year award.

“Sport matters," he said. "It has the power to help people. I am here today thanks to football, and if I can give my compatriots a little of everything I have received, then I will do it gladly.”

Having long since traded his football kit for a suit, Weah continues to deliver on that promise and to justify his prominent place in the history of football and Liberia.