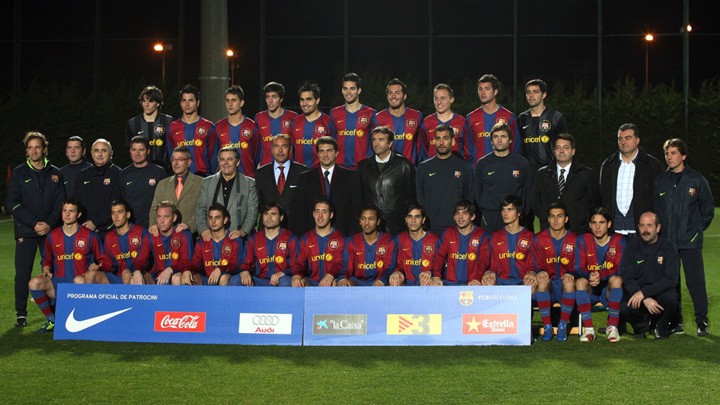 Pep Guardiola had an impressive Barcelona B side in the Tercera Division in the 2007/08, their first campaign in the fourth tier of Spanish football since 1973/74, and under the current Manchester City head coach's guidance, they secured promotion back to the Segunda Division B.

Many of those players went on to forge decent careers for themselves, but only one currently plays for the Blaugrana.

He joined Barcelona B from Real Union in 2007. He played two matches for the first team: against Mallorca in LaLiga Santander and Alcoyano in the Copa del Rey. Afterwards, he played for Real Sociedad, Granada and Levante before returning to Catalonia with Espanyol in January.

He came up through the ranks at La Masia. While playing for Barcelona B, he left for Blackburn Rovers' under-21 team, where he spent half a season before forging a career in Catalan football with Hospitalet, Montcada, Rubi and Santboia.

He also spent his whole youth career with the Blaugrana, although he did not have a chance to make his first-team debut. He is currently playing for Lleida Esportiu, after having spent time with Terrassa, Sant Andreu, San Roque Lepe, Ceuta, Alaves, Real Valladolid and Cartagena.

He arrived at Barcelona after beginning his career at Real Murcia. He reached the first team, but then left for Sporting Gijon. From there, he went on to play for Sevilla, Elche, Olympiacos and Al-Hilal, while he currently turns out for another Saudi outfit in Al-Wahda.

Raised in La Masia, he left for Sevilla Atletico when he was in the B team. He is currently at Sporting Gijon and previously represented Real Valladolid, Maccabi Haifa, KAS Eupen and Partizan Belgrade.

The Dutchman rocked up at Barcelona from Real Madrid Castilla. He spent two years in the Catalan capital before leaving for Marino de Luanco, Zamora, Aviles and Villaralbo.

He came into the spotlight whilst playing for Almeria die to his marking of Xavi Hernandez during a match. He spent half a season at the Mini Estadi before continued his career with Cadiz, Almeria, Genoa, Real Mallorca, Swansea, Al-Duhail, Granada, Rubin Kazan and Fuenlabrada.

Raised at La Masia from a young age, he left for Atletico Ciudad. He went on to have spells with Gramanet, Real Union, Santboi, Santfeliuenc and FC Miyagi in Japan.

He spent three years with Barcelona B before moving to AC Omonia. The latter years of his playing days were spent with Montaneros, Sabadell and Pobla de Mafumet.

The Cordoba-born player began his career in the now defunct Barcelona C team, completed one season at Barcelona B and then left for Terrassa and Ecija before finishing his career at FC Miyagi in Japan.

He signed for Barcelona B from Valencia's academy and spent two years there, before having a six-year spell at Recreativo Huelva. He also played for Albacete, Racing Santander, Alcoyano and Vilamarxant.

He spent two years at Barca B before moving on to Numancia, Cartagena and Recreativo in Spain. He then tried his luck abroad with Western Sydney in Australia and then with Indian side Bengaluru.

The last survivor. The midfielder who Guardiola pushed to become one of the most dominant footballers in Europe. He became a world and European champion with Spain, as well as all possible competitions at club level with Barcelona.

He came through at La Masia. Following Guardiola's departure, he left for Terrassa, before ending up at Malaga, Ponferradina, Villarreal, Real Murcia, Alaves, Alcorcon and Racing Santander.

He went on to play 14 games for Barcelona's first team between 2007 and 2009. After this, he spent time with Xerez, Getafe, Neuchatel Xamax and Espanyol, where he has established himself as one of the squad's leaders.

He was one of La Masia's jewels. He asked for more game time in the first team after making a breakthrough under Guardiola, but left in 2013 for Germany, where he is now a Bayern Munich stalwart.

He spent three years with Barcelona B and then went on to play for AC Omonia. After his adventure in Cyprus, he played for Xerez, Ponferradina, Moghreb Tetouan, Linares, Penya Deportiva and Olimpic de Xativa, where he is currently.

The Mexican was one of the most promising midfielders in La Masia at the time. He was young when Guardiola noticed his quality. He made his first-team debut, performing inconsistently, and after he went to Villarreal. Now he is LA Galaxy's creative force.

He arrived at the Mini Estadi from Terrassa. He played two years at a good level before leaving for Cadiz. From there, he passed through many Spanish football teams: Cadiz, Gimnastic de Tarragona, Ponferradina, Alcorcon and Espanyol, but then he took his talents beyond Spanish borders with Pumas, Lobos, CD Veracruz and AEK Larnaca.

The Catalan club signed him from Villarreal, and without making his first-team debut, he moved on to Malaga. Levante, Getafe, Real Betis, Sporting Gijon, Perth Glory, Elche and, most recently, Al-Arabi in what has been an interesting career to say the least.

He was one of the veterans of the squad, despite his young age. He arrived from Real Zaragoza, where he had made his first-team debut in the Copa del Rey. He later turned out for Ejea, Alaves, Sabadell, Real Oviedo and Tudelano.

One of the great talents that La Masia has produced. He made his debut at the Camp Nou, playing in one LaLiga Santander match and two Champions League games. In one of them, against Rubin Kazan in 2010, he scored his first goal in Europe. He left for Club Brugge, where he stayed until 2016. Afterwards, he packed his bags and left for Toronto, Al Arabi and Umm Salal.

He was on everyone's lips as the promising new attacker who was going to dominate the world stage. All the spotlight was on him, but it wasn't to be. He played in one official match with the first team against Cultural Leonesa. Afterwards, he left for Manchester City's reserve team, and from there to Brighton before returning to Spain. He has since played for Racing Santander, Granada, Hercules, Real Mallorca, Hapoel Tel Aviv, Sabadell, Kairat Almaty and Politehnica Casi.

The man who scores important goals. He scored in all competitions with Barcelona. He became a key figure in Barcelona's first team under Guardiola before enjoying more success in the Premier League with Chelsea.

Remembered for the goal he scored against Jose Mourinho's Real Madrid in El Clasico. He had his chances in the first-team squad, but had leave the club in search of game time, with Sporting CP, Real Valladolid, KAS Eupen, Grasshoppers, AEK Larnaca and NK Slaven Belupo all having had him on their books.

Guardiola's only year in charge of Barcelona B also happened to be Falque's last season there. He impressed but was not considered to be a right fit for the first team. He later played for Juventus, Bari, Villarreal, Tottenham, Southampton, Almeria, Rayo Vallecano, Genoa, Roma twice, Torino and has now returned to Genoa.

After leaving Barcelona, he had an extensive career in Catalan football, where he enjoyed game time for Sabadell, Premi, Terrassa, Vilassar de Mar, Santboia and Mataro. He tried his luck at Biggleswade Town before packing his bags and heading for Andorra, where he played for Lusitanos and Sant Julian.

He spent one season at Barcelona B. He arrived in Catalonia from Real Zaragoza and went on to don Atletico Madrid's shirt. From there, he has become something of a journeyman, playing for Atletico Ciudad, Castellon, Benidorm, Puertollano, Atletico Malagueno, AO Kavala, Sageata Navodar, Academica Arges, Academica Clinceni and Velez CF.