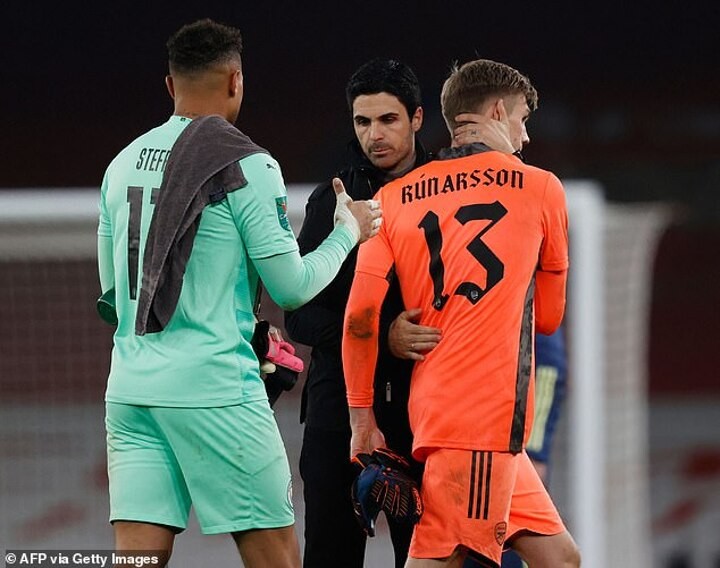 With Mikel Arteta and Arsenal already looking for another goalkeeper to provide worthy back-up to Bernd Leno, it's safe to say that Alex Runarsson has endured a horror four months at the club.

After the Gunners let Emiliano Martinez leave for Aston Villa last summer, Arsenal brought in Runarsson from Dijon as his replacement - but there were immediate question marks surrounding his arrival after failing to convince in Ligue 1.

And since his arrival, those doubts have been confirmed, producing nervy displays and showing a lack of authority between the posts - including a nightmare performance in the Carabao Cup defeat to Manchester City last month.

Following Runarsson's horror start to his career at the Emirates, Sportsmail has decided to take a look at Arsenal's top 10 worst signings... in order!

When Sanogo arrived in north London in the summer of 2013, there were some high hopes after he had just enjoyed a breakthrough season at Auxerre, in which he scored 10 goals during 13 appearances in Ligue 2.

But in his debut season at the Emirates, the gangly Frenchman - who was largely used as a substitute by Arsene Wenger - failed to score a single goal in 14 appearances.

He did however score his first competitive goal for Arsenal against Borussia Dortmund in the Champions League during the 2014-15 season, which helped the Gunners secure their spot in the last-16 of the competition with a game to play.

But it says a lot when his stand-out moment of his Arsenal career came in the Emirates Cup, when he netted four times in the 5-1 thrashing of Benfica in August 2014. He certainly didn't live up to expectations.

The Icelandic goalkeeper comes in at No 9 on our list after his far from convincing displays in the Arsenal goal as Leno's back-up.

He was culpable for City's first goal in their 4-1 Carabao Cup rout at the Emirates last month after failing to command his six-yard area while he fumbled Riyad Mahrez's free-kick, which was straight at him.

His performances have put fear into Arsenal supporters worried what will happen if Leno suffers any type of injury. But it must be highlighted that Runarsson was always viewed as third-choice with room for improvement after the club failed to find a No 2 last summer.

They no longer have a worthy back-up in Martinez and with Matt Macey recently joining Hibernian, the Gunners are in desperate need of a No 2 - which they will go on the hunt for this January.

But we must cut Runarsson some slack, he is still learning and is still in his embryonic stage at Arsenal.

One of the biggest takeaways from Unai Emery's time at Arsenal was the nightmare loan signing of Suarez from Barcelona in January 2019.

During his loan spell in the English capital, the Spanish midfielder only made six appearances overall - twice in Europe and four times in the Premier League - in a hugely underwhelming stint at Arsenal.

After leaving Arsenal, Suarez opened up on his disastrous loan spell, claiming he was not 'even at 50%' of his full capacity because of a persistent pelvic injury - pinpointing a knock suffered in his second game for the club against BATE Borisov as a decisive moment for him.

'I thought I had torn something; I was in a lot of pain. And from then on I carried on training with medication and putting up with it as best I could but I didn't feel right and [Unai] Emery didn't think I was right.

'Hey, remember me? It's Kim Kallstrom but you might know me as the guy with the broken back.' This is how the former Swedish midfielder introduces himself on Arsenal's website when reflecting on his bizarre brief stint at the Emirates.

Again, Kallstrom was another one of those Arsenal signings which still leaves many fans puzzled to this day.

Kallstrom moved to Arsenal on loan from Spartak Moscow on transfer deadline day in January 2014, with the move sanctioned despite a back injury being discovered during his medical.

The Swede only featured four times for Arsenal and is widely seen as one of the worst Premier League signings made.

But he did however help the Gunners end their nine-year trophy drought, scoring a decisive penalty in the triumphant shoot-out against Wigan during the 2014 FA Cup semi-final.

There were hopeful expectations on Jeffers' shoulders after joining Arsenal from Everton in 2001, but his time at Highbury was far from ideal under legendary manager Arsene Wenger.

The description given to Arsenal fans of Jeffers was 'fox in the box' following his £8million move.

But the former England striker scored just eight goals while having various fitness issues before being sold to Charlton for £2.6 million in 2004.

Wenger would go onto reveal: 'We were considering him (Ruud van Nistelrooy) and Francis Jeffers and, in the end, we went for Jeffers.' It is safe to say that move certainly didn't go to plan.

This goes down as another panic signing from the Gunners as Wenger looked to solve his shortage of left back options in August 2011.

But Santos' lack of defensive discipline hurt Arsenal on numerous occasions and it wasn't long before he departed for Gremio on loan.

His lack of pace and poor positioning was vilified by Arsenal fans and the media alike, and he never looked comfortable wearing the Gunners shirt during his one-and-a-half-year stint at the club.

While he showed some signs of attacking intent, most notably his goal in Arsenal's 5-3 win at Chelsea in 2011, his decision to swap shirts with former player Robin van Persie at the half-time of the club's defeat at Manchester United summed up his time at the club.

After an injury to 'Mr Arsenal' Tony Adams, the club were quick to sign Stepanovs from Latvian side Skonto Riga as an emergency replacement in 2000.

After earning more playing time, his confidence took an instant hit after featuring at centre back during Arsenal's infamous 6-1 defeat to then arch rivals Manchester United in the Premier League at Old Trafford.

The Latvian defender never fully recovered from the Old Trafford nightmare and he found first-team opportunities limited behind Adams and Martin Keown in the Arsenal backline.

Stepanovs made only 17 Premier League appearances for the club before moving to Grasshopper in Switzerland in 2004.

Another centre back brought in as cover, this time in 2010 due to a shortage of options in defence for the Gunners.

After a couple of strong seasons playing for Sevilla and earning appearances for the France national team, there was optimism surrounding his signing.

But the Frenchman made several defensive errors early on in his Arsenal career and looked out of his depth throughout his time in north London.

Just three years after joining, Squillaci was shipped out to French outfit Bastia. A signing Arsenal fans won't forget anytime soon for all the wrong reasons.

After Wenger hyped up Diawara after moving to Highbury in January 1999, many fans were expectant of what he could deliver up front as they battled it out for the Premier League title with Manchester United.

But what followed was a nightmare spell in north London. During his time at the club, the Frenchman failed to register a single goal and only lasted until the end of the season when he was sold to French outfit Marseille.

There were hopes he would emulate Nicolas Anelka but that proved to be emphatically wrong.

Diawara's lack of cutting edge proved rather decisive as United pipped them to the league title before going onto record their famous Treble.

He did have a fairly impressive talent for hitting the woodwork though, most notably in the costly penultimate Premier League clash with Leeds in May 1999.

The No 1 spot goes to South Korean forward Park, who had a very promising career ahead of him before signing on the dotted line for Arsenal from French side Monaco in 2011.

The striker had just come off the back of two impressive seasons with Monaco in Ligue 1 and was on the verge of joining Lille before pulling out after hearing of Arsenal's interest.

However, it proved to be the wrong decision for Park, and ultimately a signing that ended up being a real head-scratcher for the Gunners.

Despite scoring on his debut for Arsenal in a League Cup match against Bolton, that proved to be it for Park.

A lack of game time and apparent questions over his ability, which led to loan spells at Celta Vigo and Watford, saw him released from the club in 2014. He ended up signing for Saudi Arabian side Al-Shabab. His time at Arsenal remains a complete mystery.