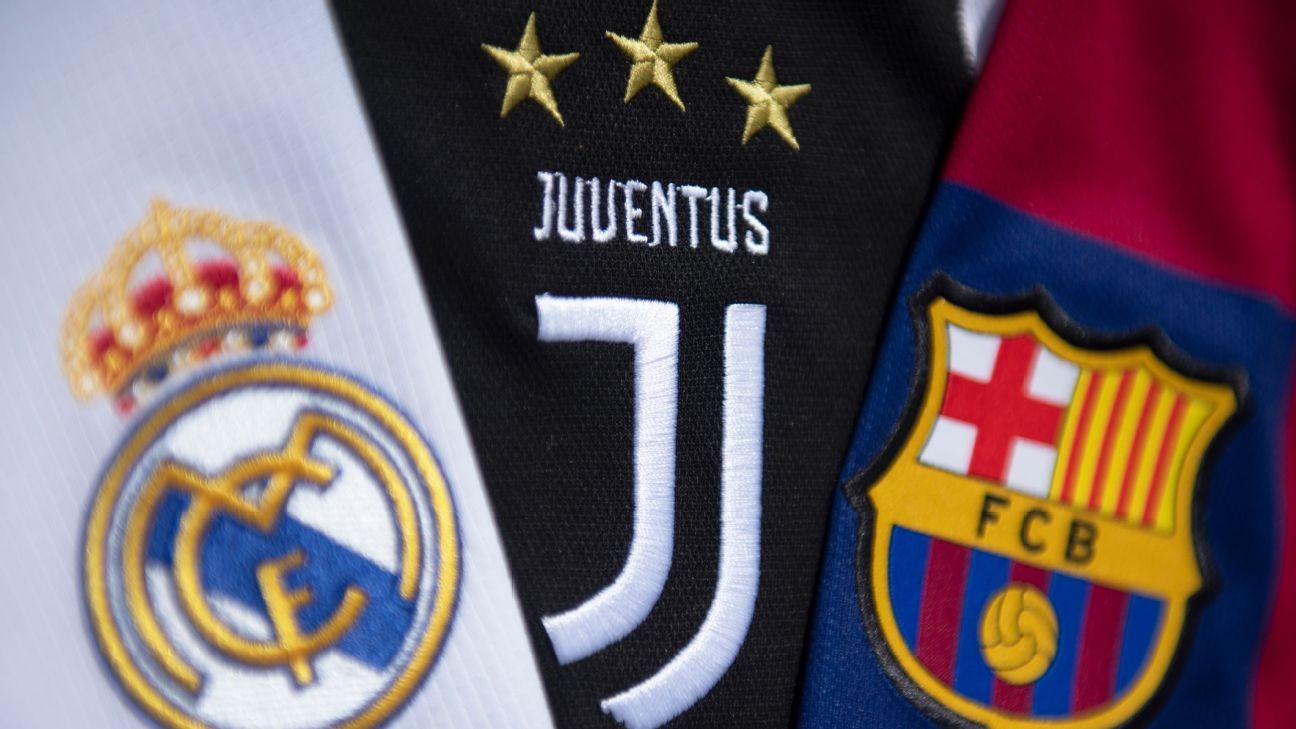 Wednesday marks the one-year anniversary of the beginning of the collapse of the European Super League. The most revolutionary project in the history of the club game started to formally unravel when Chelsea issued a statement that they would be withdrawing. Other clubs soon followed suit -- some of them adding very public apologies to supporters -- until just three remained: Real Madrid, Juventus and Barcelona.

They have not given up the fight and continue to do battle in European courts, arguing that UEFA and FIFA are abusing a monopolistic position in violation competition law by acting as both regulators and competition organizers. A lot will depend on the verdict returned by the European Court of Justice (ECJ). But either way, the underlying issues that led to 12 super-clubs forming the league have not gone away.

Q: Does this mean the Super League could return?

A: If the ECJ finds in favor of Real Madrid, Juventus and Barcelona, I'd imagine it's almost certain. It would depend on the wording of the verdict, of course, but if the court rules that clubs can't be punished by regulatory bodies -- such as UEFA, FIFA, national leagues or federations -- for organising their own tournaments and playing them when they want, against whomever they want, and dividing up the revenues whichever way they want, then the door is wide open.

And for all the apologies that came from the number of clubs who joined and then pulled out, saying they made a terrible mistake and would "listen to fans," I'd imagine most would be back on board. After all, they'd say they were only following the law. And the law allowed them to form a Super League.

Q: OK, so how likely is it that the ECJ will back the Super League? And when will it issue its verdict?

A: We have no clue when it will issue their verdict, or even if it will. Many expect it will be later this year, but it's just speculation. But it could also kick the whole thing down the road and decide there are no grounds to make a ruling. That would leave us further in a state of limbo. Or it could give football (maybe even sport in general) an exemption from some aspects of competition law. That would signal defeat for the Super League and probably quash it once and for all.

On the other hand, if the ECJ concludes that professional football is primarily a business and European law guarantees the right to businesses to compete as they see fit? Well, that's another matter.

A: I'd imagine UEFA would say first and foremost that it is not a business, but a public trust that runs the game at all levels, from amateur to professionals. Yes, it controls the most lucrative competition in club sport, but it doesn't squirrel away the profits. On the contrary, it hands them right back to clubs and federations to develop and support the game. It is monopolistic maybe, but in the same way the police or the public health service or the highway system is a monopoly. It doesn't profit from it; every penny is reinvested for the common good.

In some ways it's a classic socialism vs. capitalism argument. Where the ECJ stands on this will depend, I think, on the prevailing political mood in Europe.

Q: And what is it right now?

A: Purely in terms of numbers, I think there's still widespread opposition. Don't forget, the 12 Super League clubs may have been among the biggest in Europe, but they only represent three leagues. Even if you want to be cynical and argue that Bayern Munich, Borussia Dortmund and Paris Saint-Germain would hop right on board if the ECJ gave the green light, you're still talking about a handful of clubs from just five nations.

There are, of course, many more nations and many more clubs in Europe. And many more fans of other clubs, supporters who turn into voters on election day. And sure, the ECJ (like all courts) is supposed to be independent of politics, but in real terms it is guided by current norms and sentiment. The sentiment among non-Super League clubs (or potential Super League clubs) is decidedly against the project, mainly because of the cack-handed way it was introduced.

There are three big clubs still pushing for a Super League to happen. Photo by Visionhaus/Getty Images

Q: What do you mean?

A: The Super League was simply atrocious at explaining why this is necessary or desirable. It simply said -- and I'm paraphrasing here -- "UEFA is a monopolist, the system is broken, this is the best way to fix it, we're going to do it, UEFA come negotiate with us to make it happen."

Other than detailing that there would still be solidarity payments to those outside the Super League, it was never explained how it would benefit the rest of football. And when you look at the disastrous financial state of many of the Super League clubs, it's not a surprise that many outside it simply said something akin to: 'OK, some of you are doing this to be greedy; some of you are doing this to save your own backsides.'

Beyond that, their business argument consisted of guaranteeing places for themselves, generating more revenue by playing more games, keeping a bigger slice of that revenue and promising to enforce cost controls like salary caps.

Q: OK, so it's not surprising that non-Super League fans were against it, but why were so many fans of Super League clubs against it as well? Was it just the reaction of media and politicians?

A: I don't think so. I think even fans whose clubs would have benefited see their own club as sitting atop a greater whole, which is the pyramid system that has served European football well for 100-plus years. Not everyone, of course, but it came across as a power grab and, I think, even among the most pro-Super League sets of fans -- like Real Madrid or Juventus -- many still bristled at this. Few like to see themselves as the bad guys.

Q: Go back to the "business argument" for the Super League: more European games, more spots for big clubs, bigger slice of the pie for big clubs and tighter financial controls... isn't that what we're getting in the Champions League from 2024?

A: Pretty much. That's why some say it's a Super League by another name and things like the "historical coefficient" is what rankles many, as well as the expanded format. UEFA has also introduced new sustainability rules that cap spending as a proportion of revenue.

The Champions League format is set for some big changes in 2024. FABRICE COFFRINI/AFP via Getty Images

Q: So you could say the Super League clubs got what they wanted? Or at least some of it?

A: In some ways, I guess so. But I think this speaks to the fact that some of their concerns were, frankly, legitimate. They want more money and lower costs, which I guess every business wants. I get how playing more games will generate more revenue, fine, but if everybody makes more money, all you're doing is having more cash splashing around in the system and more going out to pay for transfers and wages.

So you want cost controls -- like Financial Fair Play or salary caps or whatever UEFA's new sustainability regulations are going to look like -- but the problem is that they need to be enforced and they need to be transparent, ideally without discouraging legitimate investment. And, as we've seen with the Paris Saint-Germain and Manchester City cases with clubs being sanctioned and then appealing and oftentimes winning, it has been very difficult for UEFA to do that.

We don't know much about the new enforcement mechanisms, but unless they're tough and transparent, European football won't rid itself of this notion of illegality, that people can do whatever they like. And that will just lead to more cynicism and acrimony. I think above all, European football has a "trust" problem.

Q: That's not the only problem ... what about the imbalance of resources?

A: That's sort of built into the system, and that's what makes the task so difficult for UEFA, which has to cater across all levels of the game. In reality, we already have a de facto tiered system, with massive polarization at the top. Bayern are on the verge of winning their 10th straight German Bundesliga title, PSG will make it eight of the last 10 from Ligue 1 in the coming days, Juventus won nine in a row in Serie A recently. Even when you have different teams winning it, like in the English Premier League, there's really no variety in terms of who qualifies for the Champions League. Since 2005, only one Premier League side outside the "Big Six" -- Leicester in their fairy-tale 2015-16 campaign -- has finished in the top four.

Even within the group of super clubs, there are radically different ownership structures and goals. PSG and City operate a certain way because their owners aren't simply motivated by profit and have vast resources. Barcelona, Bayern, Real Madrid and Borussia Dortmund are, to varying degrees, nonprofits who reinvest in the club and don't measure success by the bottom line. AC Milan, Atletico Madrid, Arsenal, Tottenham, Liverpool and Man United have owners who are businesspeople and want to turn a profit in the long run.

It's just the nature of the landscape that is so structurally uneven. And globalisation and commercialisation have only made it more extreme. But that's also why, regardless of what the ECJ rules, I'm skeptical about the prospects of a club-run Super League. This is not the NFL. These aren't like-minded owners and like-minded clubs. These are entities that are too different to work together on their own, which is probably why, from the start, they wanted UEFA's seal of approval. Or, put differently, they wanted their cake and wanted to eat it, too.