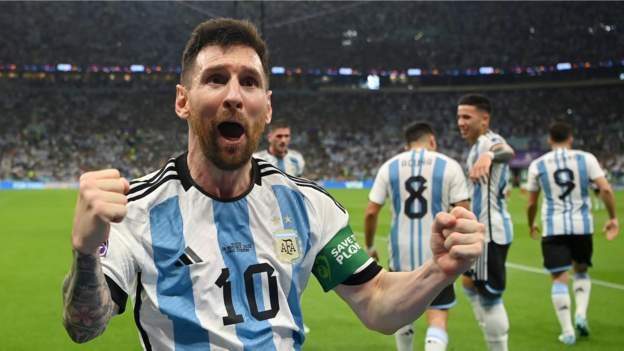 Argentina's vast support gathered in their thousands at Qatar's Energy City adjacent to the vast Lusail Stadium with only one man on their minds as they faced World Cup jeopardy.

Lionel Messi has carried the hopes of this football-mad nation for most of his career but there was an added layer of tension as Argentina confronted old rivals Mexico in an ear-splitting atmosphere on the stage that will host the final.

Argentina knew defeat would effectively end their World Cup after two games following the embarrassment of the loss to Saudi Arabia in the opener. Messi knew this would mean the major honour that has eluded his grasp in a glittering career would be forever out of reach.

The clock showed 64 minutes. Each passing second turned up the pressure valve on Argentina and, in turn, on Messi. He knows any Argentina failure on this stage, justified or not, can be painted as Messi's failure.

He had been on the margins but took centre stage to devastating effect as Mexico fell victim to the magical left foot that has broken the hearts of so many opponents.

One touch delicately killed the pass from Angel di Maria. The second touch arrowed a low finish into the bottom corner past the outstretched left arm of Mexico goalkeeper Guillermo Ochoa.

Amid an explosion of noise from Argentina's fans, Messi ran towards them with arms outstretched in that familiar celebratory pose. He looked highly emotional with the relief and release, engulfed by team-mates who knew the man they rely on most had delivered again.

The greatest players deliver when it matters so it should be no surprise Messi produced again.

Until that moment, it had not been an easy night for Messi against Mexico, who clearly relished the idea of putting the skids under an Argentina side heavily tipped to lift the World Cup in this same Lusail Stadium on 18 December.

Messi had been marginalised by Mexico. He could not exert any influence in a first-half morass of stoppages and infringements, the 35-year-old often at walking pace looking for a patch of space where he could escape close Mexican attentions.

It was when a football match eventually broke out in the second half that Messi flourished with the characteristic darting runs, the quick passes and, of course, the stroke of genius that broke the deadlock.

Argentina relaxed thanks to Messi, this team's security blanket, and Enzo Fernandez added a glorious second with a curling right-foot shot after 87 minutes.

It sent their fans in the 88,966 attendance, the highest at the World Cup since the 1994 final in Pasadena, home happy - well at least those who did go home because many stayed on in one stand for almost an hour after the final whistle paying homage to their heroes, and one hero in particular.

Messi had brought life to Argentina's World Cup. They still need victory against Poland, with their own national icon in striker Robert Lewandowski, to be certain of going through but real belief has surged through their ranks thanks to one stroke of Messi's left foot.

He knew just what was riding on this game.

"We can't give up now," said Messi. "We have all the finals to play - we can't make mistakes. We knew we had to win, that another World Cup was starting for us, and we knew how to do it."

Messi certainly knew how to do it.

He knows this will be his last World Cup, the one elite stage on which he has yet to collect the prize. Messi suffered the heartbreak of defeat by Germany in Rio's Maracana in the 2014 final. This was the closest he has come to laying hands on the World Cup.

Messi's career has brought four Champions Leagues, the Ballon d'Or seven times and 10 La Liga titles at Barcelona. His time at Paris St-Germain is still regarded as something of a footnote but even there he has won a Ligue 1 crown.

The World Cup is the missing link and this is Messi's last chance to claim it.

Argentina did not entirely convince, have yet to show the form that has them ranked number three in the world, and the prospect of a painful exit still remains when they face dangerous opponents in Poland.

For now, however, Argentina's World Cup show is back on the road because where there is Lionel Messi, there is hope.