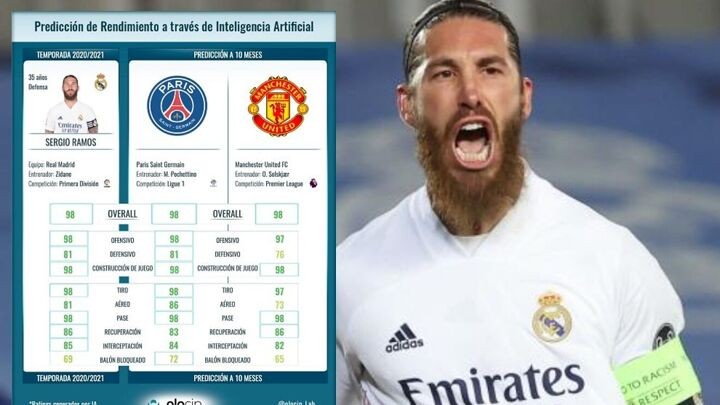 With the announcement that Sergio Ramos will leave Real Madrid this summer after a glittering 16-year career at the club, preparations are well underway ahead of his next move. Amongst the host of clubs competing for his signature, the two offers that Ramos is considering the closest are believed to be from Paris Saint-Germain and Manchester United.

Artificial Intelligence company Olocip have created a valuation model to find out whether Ramos would perform better in Paris or in Manchester.

This model takes into account the competition, the team surrounding the player and the coach's philosophy and style of play, with AI the only technology capable of contextualising a player in a new environment.

In the below table, Ramos' overall rating of 98 means that he would be better than 98 percent of the central defenders from the database of 28,000 players for each team.

Looking at the next graphic, with stats per 90 minutes, Ramos would perform better in the team's build-up play under Mauricio Pochettino.

However, his defensive actions would generate more value if he were to sign for Manchester United.

Nevertheless, he would adapt better overall from a defensive standpoint at PSG, since he has a higher defensive rating.

What do Real Madrid lose with Sergio Ramos' departure?

Had Ramos stayed at Real Madrid under Carlo Ancelotti, the AI observes that only 12 players from the entire database would have performed better next season at the club than him.