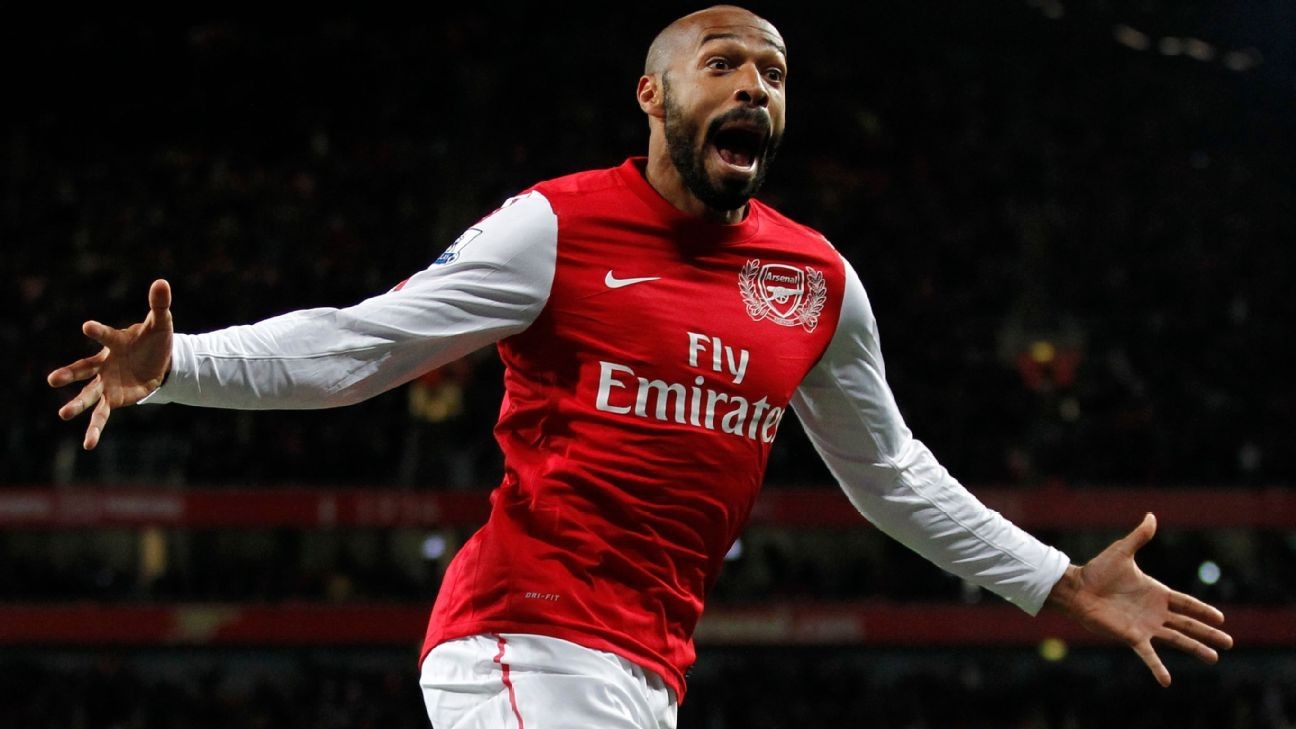 Thierry Henry is one of the best strikers to have ever played the game. AFP PHOTO/IAN KINGTON

Clubs around Europe are deciding which players they want to bring in during the summer transfer window, but who would they pick if they could magically re-sign a former player?

We went through some of the retired legends (post-1990) of each club listed below, and figured out if they could fit into the current team. So who would it be and why?

Mikel Arteta's side have strengthened the spine of the team pretty well in recent transfer windows, but a world-class striker is still missing. With Pierre-Emerick Aubameyang and Alexandre Lacazette gone, Arsenal need someone to bear the brunt of the goal scoring. There is none better in the club's history than Henry, who is arguably the best player ever to play in the Premier League, and his 228 goals and 106 assists in 375 games surpassed that of Ian Wright and Cliff Bastin. He would be a dream to coach, would bring his famous competitive edge to a side who have struggled to assert themselves on the title race, and might be able to get the best out of new No. 14 Eddie Nketiah too.

Now manager of the club's Juvenil A side, as a youngster Torres was made captain at age 19 and scored 91 goals in 244 games for Atletico Madrid before moving to Liverpool in 2007. He then returned to the club for a four-year spell (two on loan from Chelsea) later in his career where he managed 37 goals in 159 games. For this exercise, we'll take the teenage version of "El Nino." Rarely has a young striker been so hyped at the early stage of his career, and the current Atletico side would love to slot him in to replace the departed Luis Suarez.

The club could use the leadership of Carles Puyol as they transition into a new era. David Ramos/Getty Images

Amid all the financial uncertainly at Camp Nou over recent years, Barcelona have done incredibly well to maintain their commitment to attacking football with the likes of Pedri, Gavi and Ansu Fati. However, what they need now is some stability and leadership at the back, which is why they would choose to bring back the legendary Puyol. Every team needs a player who would give everything for his club, and new manager Xavi knows more than anyone what his former captain would bring to the table.

With the impending exit of star striker Robert Lewandowski, Bayern need a replacement up front, but they just signed Sadio Mane from Liverpool so we'll assume that void has been filled. The version of Lahm we'll take is the one who played right-back on his way to eight Bundesliga titles. Arguably, later in his career he was even more impressive when playing in midfield, but Bayern could use some quality in the full-back position and Lahm's versatility means he can play on either side.

With Erling Haaland on his way to Man City for €60m, Dortmund moved quickly to sign Karim Adeyemi and Sebastien Haller to replace him, so we won't look at striking options. Instead, we're going to pick a midfield foil for 18-year-old Jude Bellingham. Sammer's defensive nous in the middle of the pitch would help Dortmund get a foothold in games and his 1996 Ballon d'Or (beating Ronaldo and Alan Shearer) shows what a talent he was in his prime.

John Terry retired in 2018 after leaving Chelsea for one season at Villa. AFP PHOTO / Ben STANSALL

Chelsea have seen two of their first-team centre-backs leave this summer -- Antonio Rudiger (Real Madrid) and Andreas Christensen (Barcelona) -- so desperately need to find another. One of the few academy products to make a success of himself at the club, Terry's leadership and defensive nous made him one of the best players England has ever produced. The post-Roman Abramovich era at Stamford Bridge will need someone like him to shape the way forward, though his iconic No. 26 shirt number is now worn by new women's star Kadeisha Buchanan.

After Antonio Conte's defensive tactics in 2020-21, Simone Inzaghi is now using a counter-attacking style of play at Inter, and Sneijder would fit well with his ability to open up space in the final third. The Netherlands international was one of the best midfielders in the world on his day and thrived on the counter under Jose Mourinho. Inter sat back and Sneijder picked opponents apart when they won the ball, which is exactly what he would do now.

The exit of striker Paulo Dybala leaves a gap up front for Juventus, despite the €70m signing of Fiorentina's Dusan Vlahovic in January. While Vlahovic is a more traditional No. 9, Del Piero would slot in perfectly behind him as the archetypal No. 10. His 290 goals in 705 games stands as a testament to his impact in Turin, but it's his creativity and set-piece prowess that would likely help the Old Lady back to the top of Serie A again.

Liverpool are another one of those clubs where it's hard to target a specific need that would strengthen them immediately, but bringing Gerrard back would certainly make a big difference. While Jurgen Klopp has done brilliantly to get his transfer targets to date, a midfield of Gerrard, Thiago and Fabinho would surely take them to the title. His dynamism, drive and stamina pushed the club forward when he was a player, and one imagines he'll eventually get to do that as a manager as well.

Off the back of their worst-ever season in the Premier League (from a points perspective), United need a revamp under new manager Erik ten Hag. There are lots of positions to fill and it's tempting to suggest that the most impactful club legend to bring back would be manager Sir Alex Ferguson, but we'll stick to players. United need a quality central midfielder, but they also need a player who can whip them into shape in the dressing room and on the training ground. The combustible Keane has both attributes in spades. The issue might be that it works too well.

It wasn't that long ago that Kompany was playing for City, having left in 2019, and he's still only 36. Now the manager of Burnley, the Belgium centre-back was one of the best defenders the Premier League has ever seen, but the problem with the current champions is that there aren't many holes to fill. Now that striker Erling Haaland has arrived, the departure of defensive midfielder Fernandinho is probably the one puzzle to solve this summer, so we'll bring Kompany back for his leadership and either play him in midfield or keep him at centre-back next to Ruben Dias and use one of John Stones or Aymeric Laporte there instead.

The Serie A champions were strong in defence last season, thanks largely to Fikayo Tomori and Pierre Kalulu, but still need to bring in a new centre-back. Milan had one of the best defensive lines in history back in the 1990s with Maldini, Franco Baresi, Alessandro Nesta and Cafu, among others, so picking one is tough. Maldini, who managed over 900 games for the club, is arguably the greatest Milan player in history, though, and can also slot in on the left side of defence if needed.

Our first thought was Ronaldinho, but the last thing that PSG need is for him to rock up alongside Neymar and persuade Kylian Mbappe that their lifestyle off the pitch is the way to go! They also don't need a goal scorer right now, so Pauleta and Zlatan Ibrahimovic are out. Instead we'll go for Susic, arguably the best foreign player to have played in Ligue 1. The Bosnian's creativity would help open the gates for PSG's wealth of attacking talent and add to their options in midfield.

Roberto Carlos is arguably one of the best left-backs in history. Denis Doyle/Getty Images

One Brazilian club legend defender, in Marcelo, leaves; one returns. Real Madrid have a history of signing incredible left-backs and Roberto Carlos' 11-year spell at the Bernabeu saw him win four LaLiga titles and three Champions League trophies. There are few players who could match him for speed, stamina and the power and curve he can put on a shot or set-piece. If Madrid were able to bring back one of the famed Galacticos, then they could keep David Alaba at centre-back alongside Rudiger, with Ferland Mendy a capable backup.

Initially, we considered a more attacking player like Paul Gascoigne or David Ginola, but they probably wouldn't cope very well with the defensive duties expected of them by manager Antonio Conte. King would bring a similar energy to Terry at Chelsea, and given he was two-footed, could slot in well in a three-man defence alongside Cristian Romero and Eric Dier, and also has the ability to play in defensive midfield if needed. His injury issues held his career back, but if we pick a sweet spot around 2004-05 then it could be a good move.