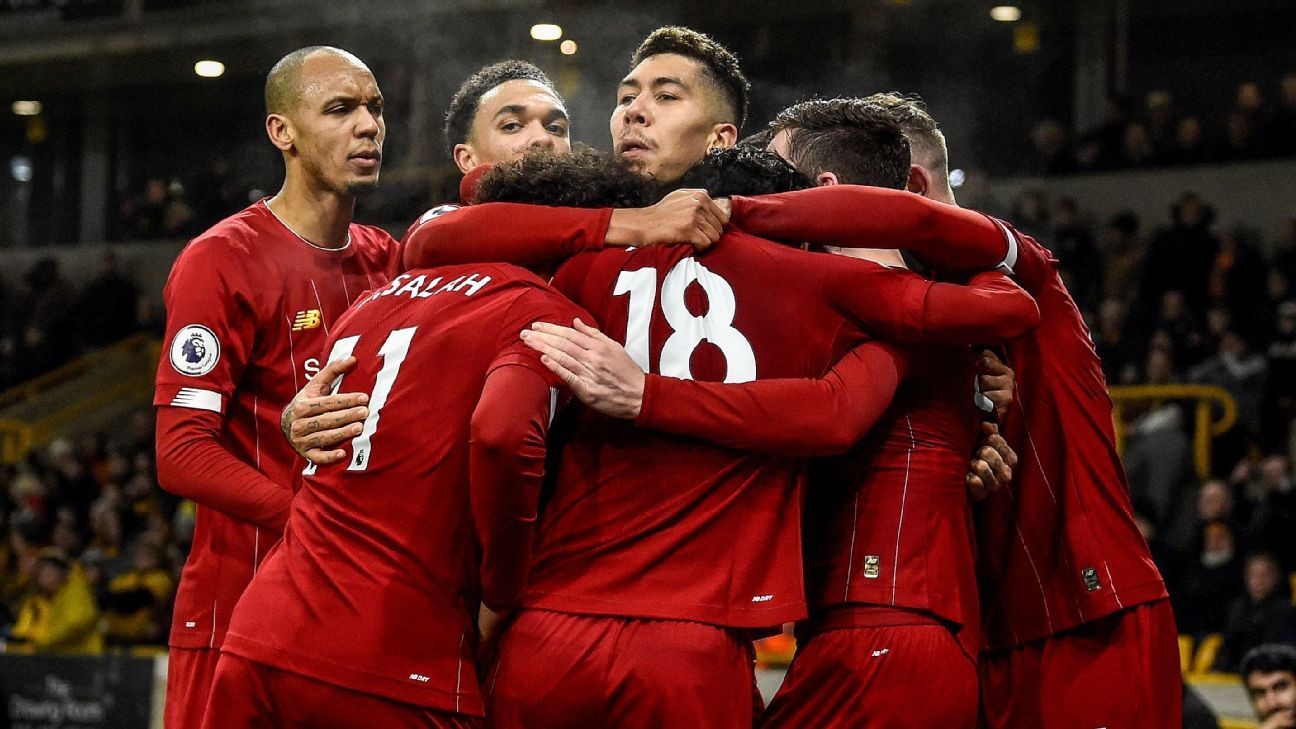 Liverpool sealed the Premier League title on Thursday night without kicking a ball, as Manchester City slipped to a 2-1 defeat at the hands of Chelsea.

This has been no ordinary title win. Liverpool have ended their 30-year wait in style, and sent records tumbling in the process.

Here, we look at the amazing new standards Jurgen Klopp's team have set.

The coronavirus pandemic may have stopped Liverpool from winning the title in March, which would have been the record for the earliest date it has been achieved, but they couldn't be prevented from sealing it with the most games to spare.

Liverpool have now won the championship 19 times, only Man United (20) can boast more.

This is a record that used to belong to Liverpool... and still does. Bill Shankly's side won 21 consecutive games at Anfield through to December 1972.

Klopp's all-conquering side have already broken that record, with the win over Crystal Palace on Wednesday moving them onto 23 home wins in a row and counting.

In October, Liverpool came so close to equalling Man City's 18 consecutive top-flight wins, being held to a 1-1 draw at Man United in the 18th game. But they were not to be denied, as they simply started another winning run and matched the 18 in February. But missed out on holding the record on their own following a shock 3-0 reverse at the hands of relegation-threatened Watford.

Beating every team in the division

Liverpool became only the ninth club to beat every other team in the top flight on the way to winning the title. Even the great Liverpool sides of the 1970s and 1980s couldn't achieve this.

Everton, Man City, Man United and Preston North End have all done it twice, however, so the Reds still have something to aspire to.

Most decades with a title win

They were level with Arsenal, Everton and Man United, who were also on seven. Still, there's a whole decade for those three clubs to draw level again.

Best-ever start in the top leagues

Liverpool dropped only two points from their first 21 matches, taking 61 points from a possible 63. It was the best start any team has ever made in the top five European Leagues -- Premier League, La Liga, Serie A, Bundesliga, Ligue 1.

Most points won over 38 matches

Now this record is a little contrived, because it's not across a season but any 38 consecutive games. But Liverpool's return of 104 points through to January 2020 eclipsed the 102 clocked up by Chelsea in 2005 and Man City in 2018.

play1:08Liverpool a model for dominance & consistency

Liverpool set a new record in February when they moved 22 points clear, which was later extended to 25 points. They are now 23 points clear, so few would bet against the record being beaten again before the season finishes on July 26.

Liverpool became the first English club to win the Champions League, follow that up with success in the UEFA Super Cup, and complete the hat trick at the FIFA Club World Cup.

STILL UP FOR GRABS

Considering Liverpool already hold the biggest-ever lead, they have a great chance of taking this record. In 2017-18, Man City finished 19 points ahead of their nearest challengers.

Most points in a season

The only thing standing between Liverpool and this record may be just how much they take their foot of the gas with the 2020-21 season due to start up in September. But with August off due to their Champions League elimination, they can put their feet up while others toil away in Portugal, and in Germany in the Europa League.

Most points in any league campaign

In 2005-06, Reading set an English league record of 106 points in winning the Championship. If Liverpool win all their remaining matches they will beat this record, despite playing eight fewer games.

Most wins in a season

Liverpool fans gather outside Anfield to celebrate their first league title in 30 years.

Most home wins in a season

Liverpool have won all 16 home games this season, and need two more to match achievements of Chelsea, Man City and Man United. They play Aston Villa and Burnley in the next two matches, so could they make it a Premier League first with a perfect 19 by also beating Chelsea in the final home game?

Three wins would also secure the record for most home points.

Most away wins in a season

Man City were almost an unstoppable force away from home in 2017-18, winning 16 times. This will be a tough one for Liverpool to match, as they have 12 wins with four away games still to play.

Chelsea hold this record, having conceded nine in 2004-05. Liverpool have already let in nine, so can't afford another.

Phil Foden was aged 17 years, 350 days when Man City won the title two seasons ago. Harvey Elliott could eclipse this, having only turned 17 in April. However, he needs three more Premier League appearances to qualify for a medal.

When Liverpool headed to Watford in February on a run of 44 games unbeaten in the Premier League, the record of Arsenal's Invincibles, who went 49 games without defeat through 2003-04, looked under serious threat.

But that defeat at Watford meant this was a record that would slip through the Reds' grasp.