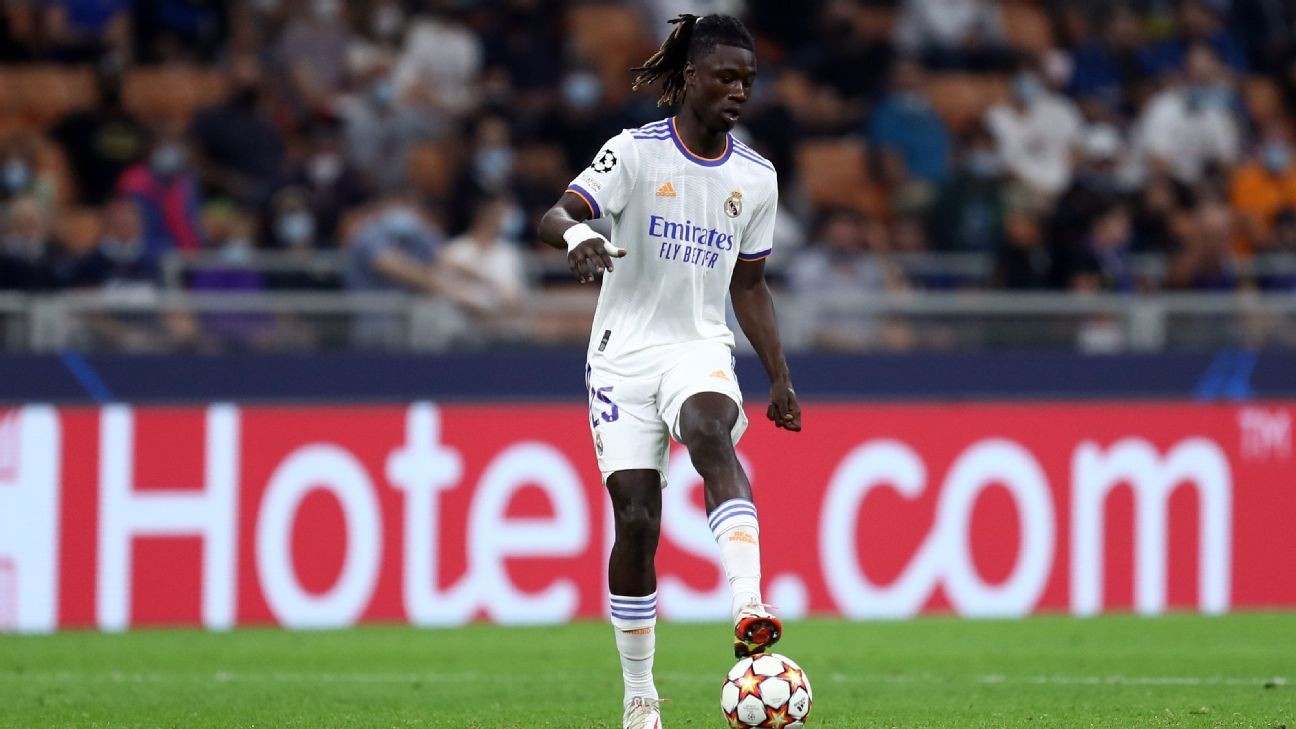 Barcelona have drawn attention recently for their use of young players like Ansu Fati, Gavi and Pedri, but while the Camp Nou club's financial issues have forced them to blood teenagers in the first team perhaps sooner than they would have liked, LaLiga rivals Real Madrid also have a collection of youngsters who are key to their future.

Madrid's financial situation is less perilous -- as they continued to make efforts to sign PSG striker Kylian Mbappe for over €200 million this summer -- but they are still led by an old guard including Karim Benzema (33) and Luka Modric (36). Madrid's average age this season has been 26.6 years old and they have used six first-team players under the age of 22, while they have three 23-year-olds who have made waves: Federico Valverde, Eder Militao and Luka Jovic.

Sitting second in LaLiga with five wins and one loss from their eight games thus far, Madrid's depth was exposed in the shock defeat to minnows Sheriff Tiraspol in the Champions League, but they will be looking to youth over the next year or so to fill some pretty big boots.

Real Madrid are less reliant on youth than Barcelona but our resident scout, Tor-Kristian Karlsen, looks at the players who could have the club's future in their hands.

Eduardo Camavinga has the world at his feet. Photo by Sportinfoto/DeFodi Images via Getty ImagesElClásico on ESPN+

FC Barcelona vs. Real Madrid -- arguably the greatest rivalry in international soccer -- is back on Sunday, Oct. 24, at 10:15 a.m. ET. Sign up now to stream ElClásico on ESPN+

Signed in August for €31 million from Rennes, the France international enjoyed the most spectacular of debuts when he scored just six minutes after coming on against Celta Vigo. Despite his young age, Camavinga is already well known in European football with two solid Ligue 1 seasons under his belt, as well as six senior caps (and two goals) for Les Blues.

Due to his excellent vision, close control, fine passing game and ball-carrying abilities, the midfielder is seen as a long-term successor to Luka Modric, or even Toni Kroos (thanks to his ability to fill a variety of roles in midfield.) Camavinga has been eased into his career at the Bernabeu so far but has done well, attracting praise for his presence and personality on the pitch from manager Carlo Ancelotti. Alongside his technical and physical skills, he certainly looks like he has the mental qualities to succeed at one of the biggest clubs in the world.

Rodrygo is starting to show more of his skills. AP Photo/Antonio Calanni

Two years on from his €45m move from Santos, Real Madrid are still waiting for the highly rated Brazilian midfielder to break out properly. Until now he has certainly shown promise -- his Champions League hat trick against Galatasaray in 2019 was memorable, while last month's late winner against Inter Milan in the same competition also provided a rare boost -- yet, while Rodrygo shows off his tremendous potential in flashes, consistency is still an issue and he's only completed a full 90 minutes on four occasions for the club.

Expectations are high and this season feels like a make-or-break campaign. Potentially a difference-maker, the forward -- who is renowned for his quick feet, dribbling skills and powerful shot -- needs to regain his form to convince Ancelotti he's worthy of being more than a bit-part player.

Vinicius Junior has had a great season so far. JOSE MIGUEL FERNANDEZ/AFP via Getty Images

One of the most improved players in the Real Madrid squad over the past year, Vinicius Jr. started the season in outstanding fashion by scoring four goals from as many league matches. The Brazilian -- now a full senior international who's mainly used as an impact substitute for the Selecao -- had been struggling with his influence and end product since joining the Spanish giants from Flamengo for €45m in the summer of 2018, but his recent performances show that he may have cracked the effectiveness code.

While originally a wide midfielder or winger he has shown more composure in front of goal than previously and he has improved his passing game in the final third (his cross to Benzema for the winning goal against Valencia in September was sublime).

With his acceleration, one-vs.-one skills and persistence, Vinicius Jr. always offers the potential to affect the game. Compared to his teammate, Rodrygo (who's one year younger and more naturally gifted), the 21-year-old has made the most out of his Real Madrid career so far and is already just 10 games away from his 100th league appearance for the club.

Miguel Gutierrez will be looking to make the most of his chances. Berengui/DeFodi Images via Getty Images

Gutierrez has made a legitimate claim for the troubled left-back spot after being given a handful of appearances towards the latter stages of last season. When called up by Ancelotti this campaign, the 20-year-old has performed respectably -- especially in the wins against Celta and Mallorca.

With the 33-year-old Marcelo prone to injury, Ferland Mendy also struggling with his fitness and new signing David Alaba required to play as a centre-back, Gutierrez may seize the moment to make the left-back spot his own. The Spain U21 international is a fine player; tidy on the ball, good at crossing from deep positions and does not look uncomfortable with the jump in quality (from defending against the Segunda B players he's been accustomed to facing.) More than anything, Gutierrez could benefit from an extensive run in the team to prove that he's ready to play consistently at the highest level.

Another full-back who has been given a taste of first-team action due to the injury crisis in defence. In the absence of Dani Carvajal, Santos was given an 11-minute cameo at right-back against Real Mallorca, replacing Lucas Vasquez. Having performed consistently for Real Madrid Castilla over the past season, the 20-year-old deserved his chance, though it's still too early to say whether Santos is the long-term successor to the 29-year-old Carvajal.

The promising defender does have an impressive physique which he's rarely afraid to use; he takes no prisoners in defensive duels and is keen to challenge for the ball even when the odds of winning it are against him. Arguably a better defender than he is going forward, Santos may still need to improve his left foot, his positioning and tactical awareness before he's ready for consistent top-level football.

Sergio Arribas could be a fine attacking option for Real Madrid this season. Jonathan Moscrop/Getty Images

Arribas arrived as a breath of fresh air at the start of 2021, coming off the bench to make some promising appearances for the first team, but despite looking good in the preseason matches he's yet to be given minutes this season by Ancelotti.

Either playing on the right wing or in a more central role, the 20-year-old can prove decisive with his tremendous ability to run at defenders and to try his luck from distance with his left-footed shot. Though only 5-foot-8, Arribas has great balance and is hard to knock off the ball when he has control. As much as his somewhat extravagant style is fun to watch, he's still prone to overdoing his "artistry."

Antonio Blanco has impressed when given a chance to shine. David S. Bustamante/Soccrates/Getty Images

Last season ended in an eventful manner for the elegant midfielder: first he was handed a full league debut by Zinedine Zidane and then was drafted into a COVID-ridden Spain team leading up the Euro 2020 tournament (he even came on to make his Spain debut in a friendly against Lithuania but didn't make the final squad.)

Antonio was particularly impressive in just his second LaLiga start, the 2-0 win against Osasuna in which he ran the Real Madrid midfield like an old hand, dictating the rhythm of the game and winning back possession. Now settled in the Spain U21 side, he is a delight to watch; his wonderful smooth touch on the ball matched with his ambidexterity make for a class act on the pitch.

He is undoubtedly a highly intelligent footballer who plays on instinct. Though it doesn't always come off, he has enough confidence to try audacious crossfield passes and positive passing options to move the team forward. However, the arrival of Camavinga may not have helped his long-term chances of breaking through.

Marvin Park has versatility up front but is short of experience. David S. Bustamante/Soccrates/Getty Images

Another Castilla product who earned Zidane's confidence last season, but whose recent involvement has been minimal. Once on the books of Tranmere Rovers, Park is a right-sided midfielder who's comfortable playing practically everywhere up and down that flank. The son of a Nigerian father and a South-Korean mother, the Mallorca-born youngster might have a difficult decision to make when he finally settles on what country to play for at senior level (he's represented Spain at youth level.)

As demonstrated during the minutes he's had so far, Park has plenty of pace, while his acceleration and industry are two of his trademarks. He appears more comfortable when looking to create from the outside of his marker -- often looking to pick out a forward with a cross, rather than running into the crowded centre of the pitch.