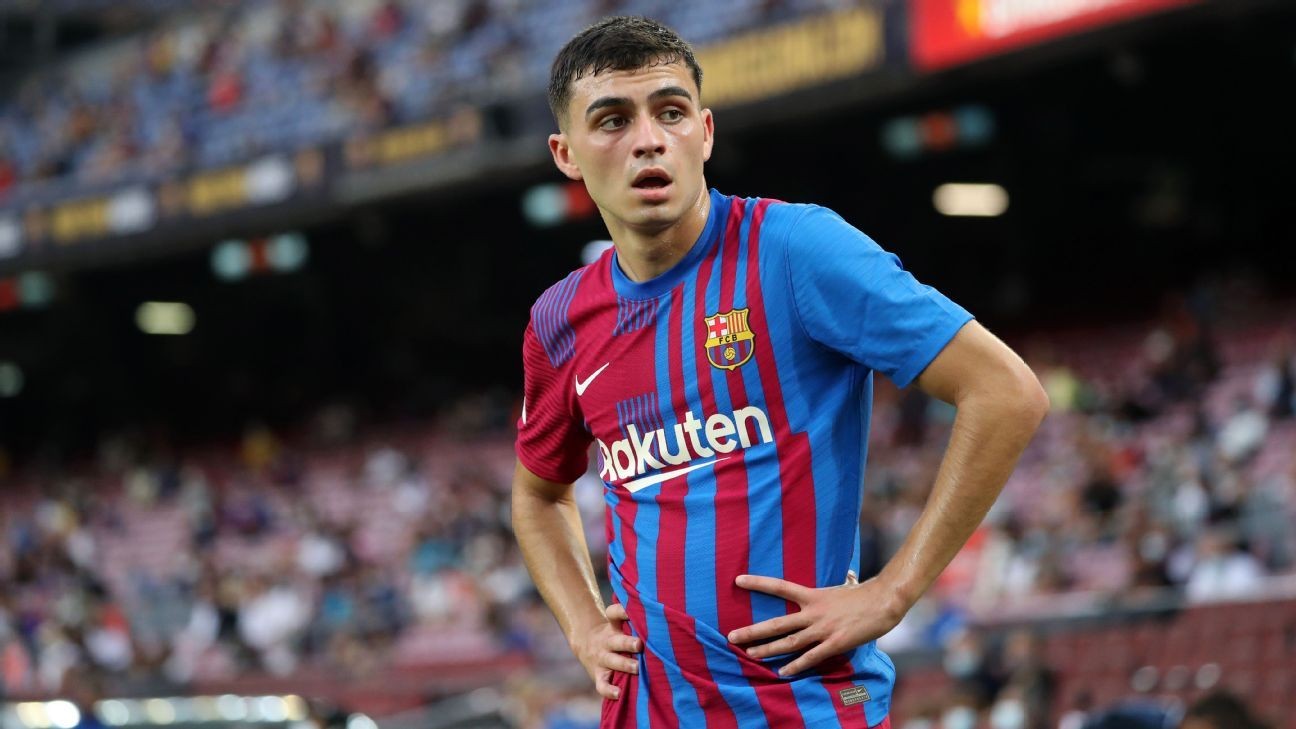 Barcelona's financial problems have been well documented (a gross debt of €1.4 billion), and they had to watch star man Lionel Messi leave on a free transfer to Paris Saint-Germain as they couldn't afford to re-sign him to a new contract this summer.

Things aren't much better on the pitch either at the moment as pressure mounts on coach Ronald Koeman after two straight defeats. Their Champions League Group E campaign has been awful, with two defeats from two games against Bayern Munich and Benfica, while the LaLiga campaign sees them in ninth spot after three wins, three draws and one defeat.

But there is some hope. After the 3-0 defeat to Bayern, Barcelona veteran Gerard Pique told CBS: "It is what it is, right now, we are who we are. ... I think that at the end of the day, we played with four to five kids of 18 years old. I think that they compete amazing and we have to invest in them, they are the future of the club."

Barcelona are a club who love to bring young players through their fabled La Masia academy and though they had to let the talented Ilaix Moriba depart for RB Leipzig in the summer, so far this season, 11 of the 24 players used by Barcelona have been aged 22 or under. Some you may have already heard of, like United States international full-back Sergino Dest or Spain defender Eric Garcia (a summer signing from Manchester City), but what about the others?

Our resident scout looks at the youngsters tasked with getting Barcelona back on track.

Pedri is already one of the top players in the world. Urbanandsport/NurPhoto via Getty Images

Barcelona need the 18-year-old -- who went from an unknown €7m arrival from Las Palmas in July 2020 to a world star within 10 months -- more than ever. Having played an astonishing 74 games during his debut season (he only missed the final LaLiga fixture last season and competed in both Euro 2020 and the Olympics for Spain), Pedri has to be carefully handled this season and has already suffered a muscular injury which has kept him out for a few games.

While he's probably the player that will miss Messi's influence at Barcelona the most, given how he gets involved in the quick passing interchanges which are vital to the team's functioning, Pedri has the quality and the industry to light up the Barcelona midfield for years to come.

A technically adept, creative passer and skilled dribbler who has drawn comparisons to the great Andres Iniesta in style, the 5-foot-9 phenom has the potential to become one of the best central midfielders in the world.

Nearly a year after injuring his meniscus, Ansu returned to the first team with a fine individual goal just minutes after he came off the bench in the 3-0 win against Levante. Considered by many as a generational talent, the right-footed winger/roaming forward has been missed and one can only hope that, after having undergone several complicated surgeries, he can return to his best again.

It's fair to say that, pre-injury, the teenager had already done enough to justify the hype. His high-speed running and ambidexterity, backed up by a low centre of gravity, makes him so hard to dispossess. And it's not just the turns, acceleration and dribbling, or combination play in tight spaces, that make him so special; he's a quick thinker too. Ansu's clever off-the-ball runs make him a threat when darting into the space behind defenders and, given his electric pace, such movement often sees him clear on goal or in advantageous positions in wide areas.

Aside from the wealth of technical and skill-based qualities, Ansu is also happy to do his share of pressing duties to help his defence. Though not 19 until the end of the month, he appears mature, level-headed and smart enough to handle the huge expectations that rest on his young shoulders ... expectations that have now increased as he inherited Messi's No. 10 shirt.

Gavi has been given plenty of minutes in the first XI this season. David S. Bustamante/Soccrates/Getty Images

Gavi has already drawn comparisons to Barcelona's legendary midfield duo of Iniesta and Xavi. Though such appraisals are premature, the 17-year-old -- who joined Barcelona from the Real Betis academy five years ago -- has some of the same natural interpretation of football. His ability to anticipate the dynamics of the game is of an exceptionally high level; he always knows his next move before he receives the ball and when in possession, he's able to keep the ball moving through delicate, perfectly weighted little touches.

So far Gavi has been fielded in a variety of positions: he started as a left winger against Atletico Madrid but has seemed more comfortable when allowed to play in the centre of midfield, allowing him to pick up the ball deeper thus getting more involved in the early build-ups. Despite only starting three LaLiga fixtures (he's yet to complete a game in any competition), he was rewarded with a call-up to Spain's senior side against Italy in the Nations League last week and impressed hugely.

Alex Balde was at Espanyol until 2011 when he joined the club. Joan Valls/Urbanandsport/NurPhoto via Getty Images

The left-back clocked up almost an hour of first-team football before he had to come off with a back injury against Granada. In that short period, Balde showed why he is rated so highly in the La Masia set-up; in addition to his spectacular pace and acceleration, he's also a tenacious, resolute defender with fine balance and a fair few body feints to show off.

Though there's improvement to be made as regards to his positioning and timing, Balde's pace and determination often offer him a second chance to get out of trouble defensively. His promising debut suggests that he'll have much more senior involvement this season once he's back from injury and Barcelona can rely on him as a long-term backup to 32-year-old Jordi Alba.

Barcelona had been tracking Yusuf Demir for some time. David Ramos/Getty Images

Arriving on an initial loan deal from Rapid Vienna, with an option to sign him permanently for €10m, the Austria international had already been in the spotlight for some time due to his Messi-esque playing style. From making his debut for Rapid as a 16-year-old nearly two years ago, Demir shone in the Austrian Bundesliga and now has the chance to showcase his skills at arguably the one club that traditionally knows how to make the best use of them.

Perhaps rather surprisingly, Demir has already been given a fair amount of playing time this season, mainly starting as an inverted right winger to make things happen in the centre with his opposite foot. Left-footed with a low centre of gravity, he possesses a lovely first touch and great ball control. His superb balance and control of his body allows him to set off on quick, deceptive changes of direction and he can appear as quick with the ball as without it.

On top of these skills, Demir also has a playmaker's ability to pick up the ball between the lines and make a penetrating pass behind the defence. Having initially been signed to play in the reserves, he has certainly made the most of his opportunities so far this season.

The son of Deportivo La Coruna legend and Spain international Francisco "Fran" Gonzalez, "Nico" has had a bittersweet few months. First launched into the first team by Koeman at the start of the season, he stood out with a stellar performance in the 3-0 win against Levante but was singled out by his manager after failing to track Joao Felix's run against Atletico Madrid a week later.

Fielded as a "double No. 6" (a two-man midfield axis) alongside Sergio Busquets, Gonzalez does share some characteristics with his venerable teammate: In addition to the size (at 6-foot-2), he's got the same effortless yet gangly way of moving around the pitch and the calm, decisive passing game.

At youth level, Gonzalez excelled with his dynamic ball progression, often getting rid of his marker with a quick turn and deft touch before galloping forward. Such a skill is obviously harder to reproduce against fully grown star athletes, but Barcelona have unearthed a defensive midfielder who can potentially grow into a leader.

play1:21Moreno says it's time for Barcelona to sack Koeman

Ale Moreno saw nothing from Barcelona to suggest the players ever believed they could beat Atletico Madrid.

Ricard Puig was expected to make the step up but he has struggled. LLUIS GENE/AFP via Getty Images

Two years ago, Puig seemed the most likely La Masia product make his name in the first team. Since then, there have been plenty of ups and downs for the supremely talented attacking midfielder. Head coaches have come and gone without Puig really being given a long run in the team, and when opportunities have presented themselves, the end product has always left something to be desired.

There's never been any doubt that Puig is a Barcelona youth product, though. When on form he is a joy to watch; excellent at finding space between the lines, tidy in possession with the awareness for a well-executed flick or a direct progressive pass. He has been outstanding at youth level and for Barcelona B, but when picked for the senior side, he's struggled to impose himself on the game beyond short flashes and now faces a make-or-break season at Barcelona with the emergence of Gavi and Pedri.

Stylistically, the Uruguay international is not the kind of defender that Barcelona tend to produce, but he's found a way of adapting his aggressive game at Camp Nou. As opposed to the trademark "elegant" ball-playing Barcelona centre-back (like Eric Garcia or Pique), Araujo is not particularly comfortable in possession and though he can make a tough pass when needed, he'd rather find an unmarked full-back or his central defensive partner instead of working the ball into tight areas centrally. This is particularly evident when Barcelona play out from the back.

More at home when he can stick to defending, Araujo enjoys the game's physical side, especially a good tussle with an opposing forward, and is dominant in the air (he comes out on top from more than 75% of his aerial duels as well as on the ground) and a threat from attacking set pieces. As witnessed against Atletico Madrid, he can get too drawn to the forward he's marking rather than keeping the team's defensive shape.

Currently a strong backup player, it remains to be seen whether he can make the step up to become an indispensable first-team member, but so far he has won respect with his uncompromising approach and strong personality on the pitch.

Never an undisputed regular with Barcelona B, Mingueza has taken his opportunities at first-team level well and has steadily improved since his senior debut one year ago. Though he lacks the acceleration and attacking edge of a modern full-back and could do with being more resolute and assertive in defensive duels, he's quietly impressed with his calm, measured approach to defending.

Mingueza has actually enjoyed his best games for Barcelona as right centre-back in a back three, where his abilities come to the fore while having the comfort of a covering defender. The young defender -- who knows his limitations and adapts his game accordingly -- also demonstrated a fair degree of professionalism as he bounced back after being substituted in the first half in the defeat against Paris Saint-Germain. While the jury is still out as to whether the 22-year-old is a long-term regular for Barcelona, he has undoubtedly deserved his chances and could turn out to be a fine utility player for the club.