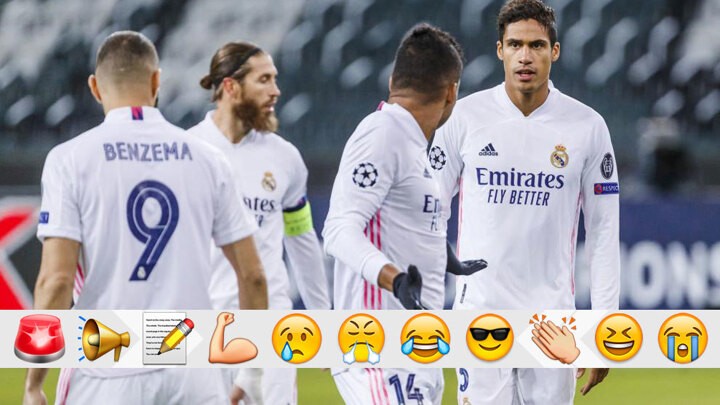 Real Madrid looked down and out, with one foot in the Europa League, as they trailed 2-0 in the 86th minute at Borussia Monchengladbach on Tuesday. But then came something that only Los Blancos can do, and they escaped with a point.

Call it what you want - endurance, fight, stubbornness, luck - but whatever it is, it continued to write Madrid's incredible European story.

Karim Benzema and Casemiro had had bad nights until the 87th minute, but they both scored to keep the Spanish champions fighting in the Champions League.

Madrid will be tapping away on their calculators now. They need at least nine points from the next 12 on offer if they are to progress to the knockout stages.

It won't be easy, but it's not impossible to achieve.

Inter visit Valdebebas next week, which will be a huge game for both sides as Inter have just two points themselves.

What a strike that was from Marcus Thuram who, if you hadn't heard, has a famous father.

He dispatched a fine strike with his spectacular left foot that Thibaut Courtois could do nothing about.

Seeing him play is a joy, if you can get over how old it makes you feel.

It seemed as though Real Madrid had run out of luck at the Camp Nou.

Marco Asensio's effort early in the second half deserved to end in a goal, but it bounced back off the crossbar.

He showed some quality though and Madrid have a start in the Balearic islander.

Just when Zinedine Zidane bets on him, the frustrating version of Vinicius Junior returned.

He wasn't great at the Camp Nou nor in Germany, where he missed a huge chance in the 49th minute.

He tries and tried but sometimes things don't go his way.

What a sad Champions League game this was.

Ten-thousand people were expected to attend, but the coronavirus' second wave is also hitting Germany and, as a result, the game was played behind closed doors.

That famous anthem is always nice to hear, but it's not the same when it echoes back off empty stands.