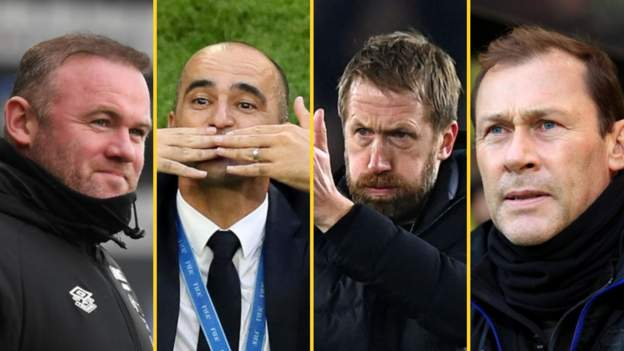 The unhappy marriage between Rafael Benitez and Everton has come to an end.

Defeat by Norwich City at Carrow Road on Saturday proved the final straw, his departure coming just seven months into a three-year contract.

Attention will now turn to finding his successor. Action needs to be swift, with Everton only six points above the Premier League relegation zone.

"Wayne Rooney will get a mention and it is up to Wayne where he feels he is at if he was offered the job," ex-Liverpool defender Stephen Warnock told BBC Radio 5 Live.

"It would be very difficult to turn down, from a club and fans point of view. Is he experienced enough? He would get the respect of the fans and the players.

"The choice I look at, and Brighton fans won't want me to say this, is Graham Potter. Everton fans want open and expansive football, and you would get that with him."

We take a closer look at some of the candidates and give you the chance to vote on who you think should be the next manager.

Benitez sacked by Everton'Moshiri took a big gamble - and lost'

There has been talk for years about Dyche taking a bigger step in his career after Burnley. He has done brilliantly in a decade at Turf Moor, twice gaining promotion to the Premier League and qualifying for Europe.

But he has not hidden his frustration at the lack of funding available to strengthen his squad. This season in particular is becoming increasingly difficult, with just one league win, a fixture pile-up because of Covid-19 and the sale of striker Chris Wood to fellow strugglers Newcastle this month.

There have been previous links to Everton, too.

A club legend, Ferguson had two spells as a player at Goodison Park and has been on the first-team coaching staff since 2014. Two years ago, after the sacking of Marco Silva and before the arrival of Carlo Ancelotti, he took charge of four games in a caretaker role and remained unbeaten, winning one and drawing three.

He then went on to assist both Ancelotti and Benitez.

Heavily linked with both Tottenham and Newcastle at different points this season, Fonseca is likely to be high up on a lot of lists.

He has also been linked to Everton in the past, and boasts an impressive CV that includes three Ukrainian league titles at Shakhtar Donetsk and a spell at Roma.

The 48-year-old seems keen to work in England and so could represent one of the more attainable targets for Moshiri.

Denmark boss Hjulmand has received rave reviews since Euro 2020, when he guided his side to a semi-final appearance against England. His side were full of quality and possessed the strength of character to deal with Christian Eriksen's cardiac arrest so well.

The 49-year-old was another man heavily linked with Goodison Park before Benitez took the job. He has had two spells with FC Nordsjaelland, sandwiched between time with German club Mainz, before taking the Danish job two years ago.

This is the sort of challenge Lampard might fancy after his departure from Chelsea a year ago. There is scope to develop younger players like winger Anthony Gordon and new signing Nathan Patterson, while also the likelihood of money to spend next summer after a window with minimal outlay last year.

Lampard likes to develop youngsters, as he did at Derby as well as Stamford Bridge, and has a point to prove after a difficult end to his reign in west London. He is an outside bet though.

The only man on this list with previous full-time experience of managing Everton, having taken over from David Moyes in 2013 and departed in 2016.

Things didn't end well for Martinez on Merseyside, but there were some good moments, including a fifth-place finish in his first season. He did, of course, win the FA Cup with Wigan Athletic just before moving to Goodison Park.

In charge of Belgium for the past six years, he has worked with some world-class players. His time there is expected to come to an end soon, and BBC Sport understands a return to Everton is a possibility.

Mourinho loves the Premier League, despite enjoying less success in it in recent times, and his name was floated earlier in the season when Benitez began to struggle.

Now at Roma, it hasn't been plain sailing for the former Chelsea and Real Madrid boss. Despite a strong start and the heaviest summer spending in Italy, his side are seventh in Serie A, eight points off the Champions League pack. A stunning 6-1 Europa Conference League defeat by Norwegian side Bodo/Glimt has been the low point to date.

This one seems like a long shot, but perhaps stranger things have happened.

There is arguably no English manager in club football with as burgeoning a reputation as Potter. He has gradually turned Brighton into a stable Premier League side while playing expansive football.

The former Southampton defender has previously worked wonders with Swedish side Ostersunds FK and settled into British football as a manager with Swansea City in 2018-19.

It will be tough to prise him away from the Amex Stadium, but he is definitely the sort of option who would suit the Toffees.

This is a particularly interesting call. Another former Blue, Rooney's managerial stock has risen in recent months given the miracles he is working at stricken Championship club Derby County, who moved off the bottom this weekend despite administration and other financial penalties giving them a 21-point deduction.

With no guarantees over his or the club's long-term future, the 36-year-old is definitely worthy of being in the conversation - but it may be too soon.

The Portuguese was among the favourites to get the job before Benitez took it and talks were held. Having guided Wolves to the Premier League in 2018, he has built a decent reputation in English football, but a difficult and short-lived spell at Tottenham after leaving Molineux may have dented that.

There are those who rate Nuno within the Everton camp, so can this one be ruled out?