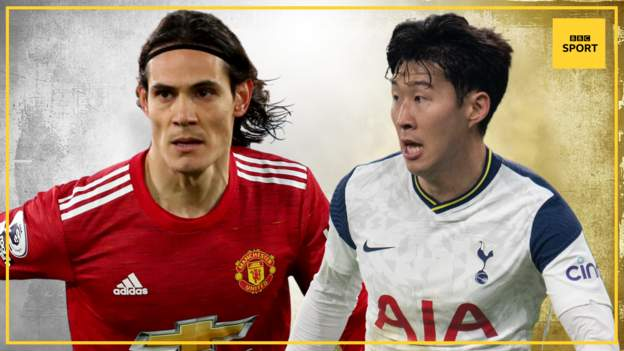 The majority of Premier League clubs are at the halfway point in their season and the pressure is building at both ends of the table.

But which players have impressed the most with their performances so far?

You have been judging the players using the BBC Sport Player Rater in our match reports all season.

We have taken a look through the results to see the players with the highest average mark for each team.

To be considered, a player has to have had made at least six appearances for their side in 2020-21.

A man who warms up in the snow with a T-shirt on and no hat or gloves has to be the player of the season so far, yes?

Left-back Tierney has impressed in an Arsenal side struggling to showcase their best form on a consistent basis. Solid and dependable at the back and contributing a superb goal and two further assists.

There was only one man who was going to top the ratings for Villa up until now and that is Grealish.

The England midfielder has not only been the star of his own team, but one of the best players in the top flight too, scoring six goals and providing eight assists in 18 games.

Graham Potter's side languish at the wrong end of the table but full-back Lamptey's exploits have seen him linkedexternal-link with a move to Bundesliga giants Bayern Munich.

But the England Under-21s defender has signed a new deal with the club after establishing himself as a regular since joining from Chelsea for a bargain £4m last January.

Burnley have been looking over their shoulders too and it is captain and centre-back Mee who has topped the ratings so far for the Clarets.

The defender missed the start of the season but has contributed to six clean sheets in 12 games since his return, which is impressive for a side sitting just above the relegation zone.

ChelseaOlivier Giroud has nine goals for Chelsea this season

France striker Giroud has scored nine goals this season and is the only Blues player with an average rating above six.

It highlights the drop in form Chelsea have had this season, with a big question mark hanging over boss Frank Lampard.

Many have tipped England Under-21s midfielder Eze to be a star of the future and his performances for Palace since joining from Queens Park Rangers in the summer have shown why.

There is a long way to go in a funny old season and Everton may still have a say in the title race.

What is certain, though, is that manager Carlo Ancelotti will be relying on the goalscoring exploits of Calvert-Lewin to fire them up the table, with the England forward netting 15 times so far in all competitions.

Fulham remain in the relegation zone, but have shown signs they can claw themselves out of trouble and Lookman looks a shrewd loan signing.

The English winger will need to add to his tally of three goals and three assists if the Cottagers are to stay in the top flight.

A fixture in the Leeds midfield and becoming a regular at international level for England too, Phillips tops the ratings for Marcelo Bielsa's men.

The 25-year-old has had an 86% passing accuracy so far and contributed two assists for his side.

Leicester CityCastagne joined Leicester in the summer from Atalanta

Castagne has been an excellent signing for Brendan Rodgers and one of Leicester's most consistent performers in the title race.

The Belgium defender has missed a portion of the season through injury, but one goal and three assists so far in his debut campaign is a decent return.

Champions Liverpool are faltering this season and their usually prolific front three have not been at their best, with the Reds going four straight league games without scoring a goal in January.

And they have missed summer signing Jota, who had scored nine goals in 17 games before suffering an injury in December.

From being an outcast to becoming one of the first names on the City teamsheet, what a turnaround in form Stones has produced.

An England recall has also been mentioned for the centre-back, who has stood out alongside summer signing Ruben Dias in the Premier League's meanest defence, conceding just 13 goals.

One of the signings of the season? Uruguayan Cavani joined United on a free transfer after leaving Paris St-Germain and it looks to be a masterstroke by manager Ole Gunnar Solskjaer, as his side launch an unexpected title challenge.

Newcastle are going the wrong way and the pressure on manager Steve Bruce continues to grow, but where would the Magpies be without goalkeeper Darlow?

An England call-up has been mooted for the 30-year-old, who has made 70 saves so far in 2020-21, the second most by a Premier League goalkeeper.

Just one victory from their 19 games this season leaves bottom side Sheffield United with a mountain to climb.

Energetic forward Burke tops the Player Rater for the Blades, despite having failed to score all season. The rating of 5.19 reflects that.

Striker Ings was firing in the early part of the season as Southampton went top of the table, but his progress has been halted since suffering a knee injury.

The former Liverpool and Burnley forward has netted seven goals in 14 games this season.

Son edges out strike partner Harry Kane as the highest-scoring Tottenham man in the Player Rater.

The South Korean has been in superb form this season, scoring 12 goals and laying on a further six.

Do West Brom have hope under Sam Allardyce? The Baggies picked up just their second victory of the season when they won at Wolves recently and have given themselves a fighting chance.

Goalkeeper Johnstone has starred so far, making 78 saves - the most in the top flight - and producing heroic performances to help claim unlikely points at Manchester City and Liverpool.

Bustling forward Antonio was back on the goalscoring trail following a spell out with injury and took his season tally to five in January.

With club record signing Sebastien Haller having left, manager David Moyes will be relying on Antonio to find the net if they are to maintain their position in the top half of the league.

Mexican striker Jimenez suffered a horrific fractured skull but his importance to Wolves is underlined by the fact he remains the club's joint top scorer with four goals.

Nuno Espirito Santo's team have not been at their best this season and will need someone to step up to push Jimenez as their highest scorer in the Player Rater.