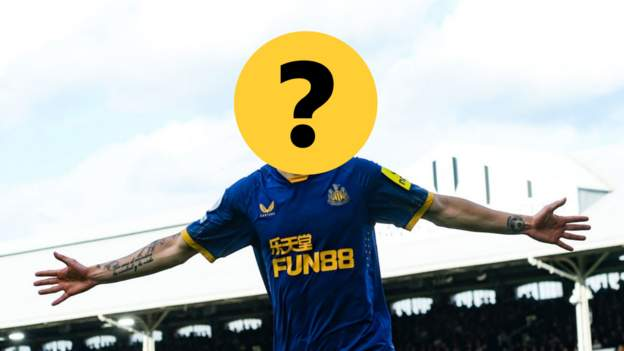 At the end of every Premier League weekend BBC football pundit Garth Crooks will be on hand to give you his Team of the Week.

But who has he picked this time? Take a look then pick your own team. As ever, Garth will have his say on the game's big talking points in The Crooks of the Matter.

Visit your Premier League's club page with all the best content

Garth Crooks' Team of the Week

The save from Adam Armstrong midway through the second half was a game changer. England's number one then stood up and parried a stinging shot from Kyle Walker-Peters without the slightest hint of any heroics. Something has happened to Jordan Pickford's game since the arrival of Frank Lampard at Goodison Park. The goalkeeper has not only been in good form but has instilled a real confidence in his defence. Everton were in desperate need of this victory at Southampton and it puts them on the same number of points as Liverpool, which rather says as much about their neighbours as it does about them.

I'm inclined to agree that Thiago Siva was lucky to stay on the pitch. The last man in defence rule was designed to stop the cynical foul and yet referee Chris Kavanagh elected to leave the Chelsea defender on the pitch regardless of his deliberate handball. However, when players make a late challenge in a desperate attempt to win the ball but are beaten due to the speed or ingenuity of the opponent, no latitude is often given. While Wesley Fofana is still finding his feet at Chelsea, and Kalidou Koulibaly is trying to come to terms with Premier League football, Silva is holding the fort at Chelsea. His header to set up Pierre-Emerick Aubameyang's equaliser was superb.

Apart from the fact that Conor Coady is a very good defender, his movement in the opposition penalty area is reminiscent of a striker. You can tell when a player loves scoring goals because they go hunting for them. Everton are still some way from becoming a top-six side but anything less will see Lampard fighting to retain his job. Talk of the Everton manager taking over from England boss Gareth Southgate at the end of the World Cup may not be without foundation but is premature. Lampard is hugely likable but widely inexperienced.

William Saliba is looking better with every game. His composure in his first north London derby was nothing short of outstanding. Meanwhile, Antonio Conte's Spurs have to learn to keep calm and hold their nerve in big games if they are to be taken seriously or have any chance of winning trophies this season. Goalkeeper Hugo Lloris makes ordinary saves look unnecessarily spectacular and is a liability in the games that matter. What was equally disturbing was Conte's lack of ability to see that Emerson Royal was totally incapable of dealing with the threat of Gabriel Martinelli and his sending-off ultimately cost Spurs the match.

It's not that long ago I was condemning Granit Xhaka for his lack of discipline, especially in the big games for Arsenal. Now I find myself congratulating him for his conduct and professionalism. I was particularly taken by the way he corralled his team-mates after Arsenal's first goal against their north London rivals, in an attempt to retain an element of composure in the red-hot atmosphere. What a pity Emerson couldn't do the same. His tackle on Martinelli was cold, calculated and utterly self-indulgent. He should be banned for six weeks not three games.

The game was done and dusted within 45 minutes. Manchester United fans were leaving Etihad stadium in their droves. Why would you stick around and watch another half of Kevin de Bruyne, Erling Haaland and Phil Foden tearing your team to shreds? I can't remember when I've seen a United side look so intimidated in the early exchanges of a Manchester derby. City on the other hand looked imperious and that was with Ruben Dias and Aymeric Laporte on the bench. To think City were prepared to keep two of their top defenders on the bench in a Manchester derby in order to keep them fresh for their midweek Champions League fixture against FC Copenhagen on Wednesday.

The travelling Newcastle fans must have loved every minute of this match. Goals flying in all over the place and a team full of players desperately wanting to be in the side under Eddie Howe. Their win over Fulham was helped by the reckless and needless tackle by Nathaniel Chalobah on Sean Longstaff. Why players in the modern era commit themselves to tackles they are not guaranteed to win is really poor decision-making and both Chalobah and Fulham paid the price. As for Miguel Almiron and the Newcastle fans, there are having the time of their lives. Playing like this Newcastle are capable of a top-six finish.

There can't be many players who have scored a hat-trick away at Anfield. Leandro Trossard's two opening goals for Brighton were emphatic and gave Alisson, a genuinely world-class goalkeeper, no chance. There are players who might have left the field having taken the knock Trossard took in the second half but the Belgium international gathered himself, got back on the pitch, and produced a memorable hat-trick and a result Brighton truly deserved. New manager Roberto de Zerbi has inherited a very good team at Amex Stadium and under the Italian, certainly on this showing against Liverpool, there's no reason why they can't get better.

These were two finishes of the highest quality by Bobby Firmino. The Brazilian may not have the legs anymore to command a regular place in Jurgen Klopp's team. However, if you require a cool head in front of goal, especially when the chips are down, you need look no further than Firmino to get your team back on track. Liverpool fans keep telling me that Thiago Alcantara (when he's fit) is their main man. He might be if he could run. The Spaniard has turned jogging into an art form. He can't get up the park and doesn't have the finishing instincts of Firmino. Thiago certainly has his moments but if we are going to compare their contributions and the importance each player provides the team, then Firmino is in a different class.

I said after Manchester City 2-2 draw away at Anfield last season that there was much more to come from Phil Foden. He was outstanding in that game and scored a superb goal. Almost a year on to the day, Foden looks far more like the finished article than he did against Liverpool. He played the first half as a false number nine that day until Pep Guardiola came to his senses and moved him to his natural position. Foden hasn't looked back since. His hat-trick against Manchester United was as good as I've seen. This from a lad who is just pleased to be in the team and prepared to do exactly as he's told.

To score one hat-trick in a season is quite special but to do so in three consecutive home matches in the Premier League is simply unheard of. Haaland is playing for a team that create chances as easily as breathing. Is it any wonder the Norwegian superstar put Manchester United to the sword and is scoring goals all day long. The big question is what happens to City should they lose Haaland through injury. They've already dispensed with the services of Gabriel Jesus. Right now this is the only hope for Liverpool, Arsenal and Chelsea. If Haaland remains fit we might as well all pack our bags and go home.

Well, at last, pitch invaders at Premier League and EFL matches will now receive an automatic club ban under new measures to tackle fan behaviour. What I don't understand is what has taken football's authorities so long to implement the obvious? These measures should have been in place years ago. Certainly after the pitch invasion when Manchester City beat QPR to clinch the Premier League title in 2012.

The delay in issuing banning orders and prosecutions has only served to embolden the offenders who now think they can bring pyrotechnics and smoke bombs to games in some perverse attempt to enhance their presence without so much as a thought for player safety.

Banning orders and jail sentences for serious offenders are the only measures than can cure the game of this pestilence.