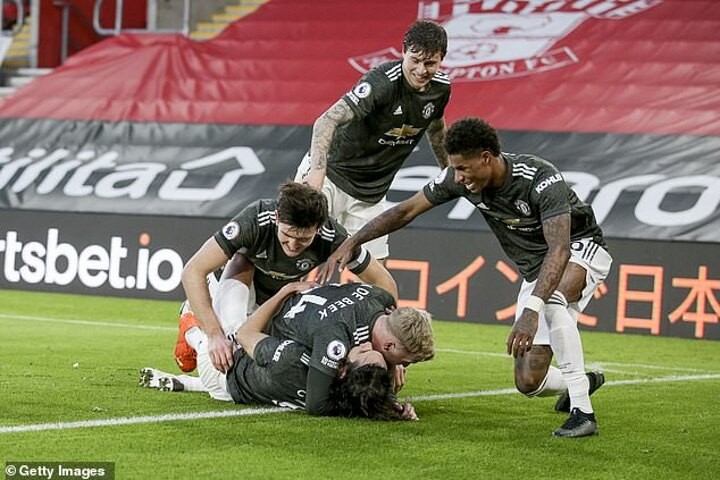 Each week throughout the 2020-21 season, Sportsmail brings you a Power Rankings table, listing the top-10 hottest players in the Premier League.

Following matchday 10 in the Premier League both Manchester clubs earned big wins in contrasting style. Riyad Mahrez starred for City with a hat-trick against Burnley and Edinson Cavani look at his razor sharp best in helping his side fight back to win 3-2 at Southampton.

Both men are new entries in the top 10, so were to they slot in and who else made the cut?

That atrocious flop of a panenka penalty attempt against West Ham is fortunately just a fading memory for the Fulham winger.

He has responded to that embarrassing setback impressively for the Cottagers and was at the heart of their shock 2-1 win over Leicester on Monday.

Andre-Frank Zambo Anguissa deserves a massive chunk of the praise for Lookman's opening goal but the on-loan RB Leipzig winger finished it with aplomb.

He was a constant menace and typified everything effective about Scott Parker's men. With a run of games at Fulham, he may well develop into a crucial player for them in their bid to avoid relegation this term.

Two games without a goal feels like a Vardy drought these days and having been ineffective against Liverpool, he failed to help the Foxes take anything from their clash with Fulham.

Vardy only touched the ball once in the opening 25 minutes but it was his header that set up the Harvey Barnes goal.

Perhaps lucky to stay in the top 10, the rapid frontman has enough credit in the bank to cling on to a place in the rankings following his scintillating start to the campaign.

The Algerian has taken on a more prominent role in Pep Guardiola's side and is thriving as a result.

He scored his first hat-trick since a win for Leicester over Swansea in December 2015 and City ran riot against Burnley. Mahrez himself loves playing the Clarets and has eight goals against them now.

With David Silva gone and Leroy Sane now at Bayern Munich, City will hope Mahrez can continue in the same manner for the rest of the season.

This was one of the greatest impacts over 45 minutes from a substitute in recent memory.

Ole Gunnar Solskjaer turned to the veteran Uruguayan at half-time with Southampton winning 2-0 and the forward was integral to what came next.

A precise assist for Bruno Fernandes started United on the comeback trail before two superbly anticipated headers from the 33-year-old secured three points.

Unfortunately his actions on the pitch were later marred after the game when he referred to a friend on Instagram as 'Negrito', an alleged racist term. Cavani has since apologised but the FA have launched a probe and he could be hit with a the minimum of a three-game ban.

The new Chelsea goalkeeper has an astonishing eight clean sheets in 11 games after Tottenham failed to find a way past him on Saturday.

A stalemate meant a share of the spoils in the derby clash but Mendy and Lampard will be heartened by their continued resilience at the back.

Despite playing fewer games than his goalkeeping rivals having arrived late in the transfer window, Mendy leads the race for the golden glove already with five clean sheets in the Premier League.

The Tottenham dynamo failed to trouble the scorers against Chelsea in what was a fairly disappointing display in attack for Spurs.

Jose Mourinho may have taken a point if offered to him before kick-off at Stamford Bridge but he set his side up to play on the counter and Son saw little of the ball in truth.

That said, he has been a shining light for the team so far this season and along with Harry Kane, will be crucial if Spurs are to mount a surprise title challenge. He still has nine goals, only one fewer than Dominic Calvert-Lewin, so only moves down a couple of places.

The Everton striker has been in a rich vein of form and is on track for well over 20 goals this season.

But he drew a blank in a home defeat against Leeds and has slipped a couple of spots down our rankings this week as a result.

Burnley are up next for Carlo Ancelotti's men and given their recent defensive capitulation against Manchester City, Calvert-Lewin will fancy himself to notch his 11th of the season and beyond.

The Portuguese winger has been a revelation for Liverpool and his rich vein of form continued in the win over Brighton.

Liverpool were denied three points by a controversial late penalty but Jota showed once again what an astute signing he has been for Jurgen Klopp's side.

Sadio Mane started on the bench so Jota was given a nod from the first whistle and repaid the faith by scoring the opening goal, a darting run inside, dummy and then accurate finish into the corner. He's already on nine goals in all competitions and is becoming impossible to leave out.

It was a quiet afternoon for the Spurs talisman against Chelsea as he fed off scraps for most of the game and couldn't produce the magic he's managed so far this season.

Having drawn a blank at Stamford Bridge, Kane has been knocked off top spot in the Power Rankings by a slim margin. Mourinho says Spurs are just a 'pony' in the title race but in Kane he has a thoroughbred striker to pin his hopes on.

Chelsea may well be up there competing with Spurs for the title come next May so games like this are crucial for the England frontman to make his mark.

United fans must already adore Fernandes while also being slightly fearful about his incredible influence on the team.

Should he go down with an injury, Solskjaer's side would suddenly look like more of a blunt instrument. He scores an outrageous amount of goals for a midfielder and added another against the Saints.

A neat touch and finish brought United back into the game and that made it seven Premier League goals for the season with three assists also to his name.