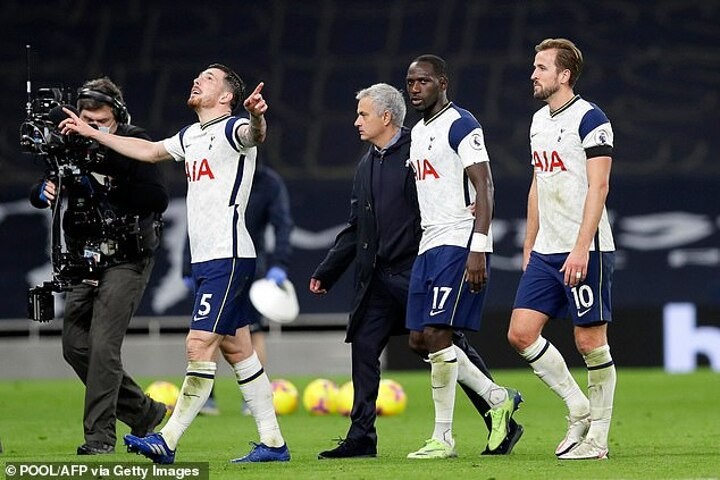 Each week throughout the 2020-21 season, Sportsmail will bring you a Power Rankings table, listing the top-10 hottest players in the Premier League.

After another international break, the Premier League made a welcome return on matchday nine. Tottenham swept aside Manchester City, injury-hit Liverpool made light work of Leicester and there were crucial wins for Manchester United and Everton.

With all of that in mind, how do Sportsmail's latest batch of Power Rankings look?

The Leeds man has made an electrifying start to the season under Marcelo Bielsa, scoring seven goals to date.

He hit a wall against Arsenal, however, with Mikel Arteta's men having to dig deep to repel the Leeds attack at Elland Road after they were reduced to 10 men in the second half due to Nicolas Pepe's moment of madness.

But for a striker in as electrifying form as Bamford, 40 minutes against a tiring and weary defence would have been an enticing prospect. Unfortunately for the 27-year-old, he drew a blank and drops five places in the rankings this week. It was still a good point for his side, though.

Like Bamford, it was a similar story for Vardy. After two weeks off and a depleted Liverpool defence to face at Anfield, Vardy must have been licking his lips at the prospect of getting back into action for Leicester.

But it was a really quiet Sunday evening for the 33-year-old. Joel Matip and a returning Fabinho expertly marshalled him out of harm's way for Liverpool and in the occasional moments where he did get in behind for a sniff at goal, Alisson was straight off his line to stifle any danger.

It was a fruitless afternoon for Vardy, who has eight goals to his name so far this campaign.

But judging by his performance against Leicester, there is no need for concern. He produced a robust and menacing display down Liverpool's left flank, as vital to the defensive as he was the attack.

He capped his tireless display with an assist through a brilliant cross for Diogo Jota's goal, which gave Liverpool a bit of breathing space at 2-0. He really had earned his full-time hug from Jurgen Klopp.

It must have been a daunting summer for Tammy Abraham at Stamford Bridge.

After a season of running through walls for Frank Lampard in his first campaign as Chelsea boss, he saw the likes of Timo Werner, Kai Havertz and Hakim Ziyech rocking up to compete for his place.

And so far, he has risen to the task superbly.

His goal against Newcastle made the game safe for Chelsea and, for a few hours at least, sent them top of the Premier League.

Abraham has scored five goals already for Chelsea this season and with two in his last two games, he looks to be coming into top form at just the right time with games coming thick and fast.

Chelsea have a tricky run of Premier League games coming up against Tottenham, Leeds, Everton and Wolves where Abraham will need to be firing on all cylinders as Lampard looks to balance domestic demands with their Champions League campaign.

It was not only another win for Chelsea at the weekend, it was also another clean sheet and another game that has gone by with the goalkeeping issue looking less and less of a problem for Lampard.

Edouard Mendy has now kept seven clean sheets in his first nine Chelsea appearances and seems to have introduced a steadying influence over what for so long looked to be a haphazard defence.

Bigger tests are on the horizon - Chelsea face Tottenham this weekend, for example - but the Blues have a rotten record away at Newcastle and a win at St James's Park is a good accomplishment for Mendy and his team-mates.

Another week, another goal for Diogo Jota, but this time, an even bigger slice of Liverpool history.

The Portuguese's header meant he is the first and only player in Liverpool history to have scored in his first four Anfield matches. His goal, Liverpool's second against Leicester in the 3-0 victory, made the game safe for Klopp's men in what was marked by many as a particularly difficult clash for the Premier League champions with the injuries piling up.

There was no Mohamed Salah for Liverpool on Sunday after his Covid-19 diagnosis but with Jota in this form, it didn't matter for the Reds. Jota's goal also helped Liverpool extend their unbeaten Anfield run to 64 matches, a new club record.

It was far from an enterprising display from Manchester United as they ground out a 1-0 win over West Brom at Old Trafford, but it was another slick display from star man Fernandes.

Yes, he missed a penalty before scoring from the retake but it was the only minor glitch on an otherwise flawless display and his strike from the spot takes his tally to the season for seven. He produced all the impetus in United's display and Ole Gunnar Solskjaer needs other players to step up to the plate in the way Fernandes does.

In his post-match analysis, Paul Scholes asked where United would be this season without Fernandes in their ranks. For United supporters, it probably doesn't bear thinking about too much.

It cannot be underestimated just how thrilling the South Korea international's current form is. His confidence was encapsulated in his fabulous finish after just five minutes of Tottenham's 2-0 win over Manchester City.

Latching on to a floated ball over the top, Son controlled the pass with his right and drilled the ball through the legs of Ederson with his left to hand Jose Mourinho's men a dream start.

It was his 11th goal for Tottenham this season and he has been in as impressive form as anyone in the league up to now. And after a result like this for his Spurs side, the number of people doubting their title credentials will have gotten much smaller.

2: Dominic Calvert-Lewin (up one)

The Everton man's form looked to have dwindled alongside that of his team before the international break. Before facing Fulham on Sunday, Everton had been winless in four, losing three of them.

But at Craven Cottage, Calvert-Lewin led the way to haul Carlo Ancetotti's Toffees back into winning form (just). Their slender 3-2 win came thanks to two goals from Calvert-Lewin, the first of which arrived inside the first minute of the game.

Fulham fought back but it was Calvert-Lewin who took the headlines. His brace makes him the top scorer in the Premier League at present with 10 goals and three points lifted Everton up to sixth in the standings.

It is quite remarkable how Harry Kane has potentially got better by scoring less. It is not like the goals have dried up - Kane has still bagged 13 in 15 appearances this season, a frankly astonishing scoring rate.

But it is his contribution to Tottenham's overall play that feels likes such a substantial development to his overall game and against Manchester City, his work-rate and connecting play deeper was tremendous. He set up Giovani Lo Celso for Tottenham's second, taking his total of assists for the season to nine.

Gary Neville couldn't praise Kane highly enough and said it was one of his best ever displays.

'He is messing with them [Dias and Laporte] like you wouldn't believe,' Neville said. 'I remember a few years ago at Wembley when they played against Liverpool and Kane was sensational against Dejan Lovren that day and he got substituted.

'This is as good as I've seen Kane play since. He's has some brilliant games but this in a top game, a hard game against Manchester City. He's been spectacular. Aymeric Laporte and Ruben Dias are £40million-£50m centre-backs. These are top centre-backs, and they've been given the run-around.'

And that means he retains top spot in the Power Rankings. Tottenham's clash against Chelsea at Stamford Bridge on Sunday promises to be something special.