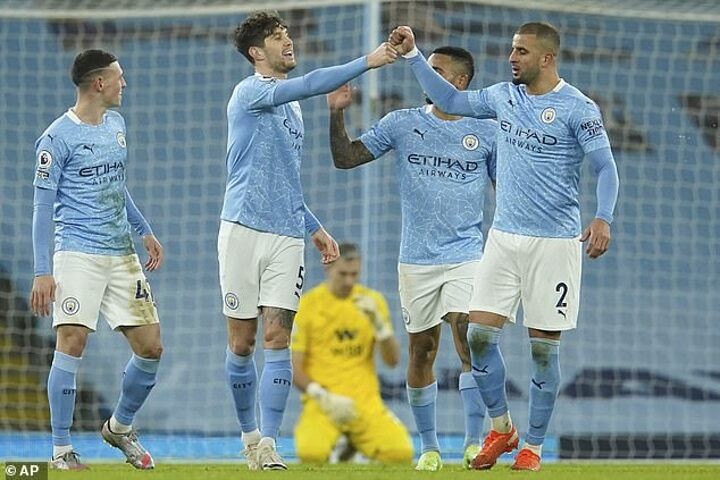 Each week throughout the 2020-21 season, Sportsmail brings you a Power Rankings table, listing the top-10 hottest players in the Premier League.

After the most recent Premier League fixtures, Manchester United kept up their title push with a point at bitter rivals and closest challengers Liverpool, Tottenham Hotspur, Chelsea and Manchester City all took advantage of the Anfield stalemate and the kids are looking alright at Arsenal . But which player comes out on top this week?

Not a great week for the Crystal Palace forward.

But then very few expected his Eagles side to go to Manchester City and tear up the Etihad Stadium with total domination.

As a result he was largely a passenger through little fault of his own.

However he did fashion Palace's best opportunity in their 4-0 hammering by Pep Guardiola's side with a speculative effort from range that nearly caught Ederson off his line.

Better days will follow for the 22-year-old whose growing reputation won't have taken a knock from the crushing nature of the defeat.

Momentum will have been lost for Palace but they have the chance to bounce back next Tuesday night against West Ham United.

Who needs Mesut Ozil? All season Arsenal supporters have been crying out for creativity through the German or even in a January transfer market raid without perhaps realising the solution was already at the club and kitted out ready to go.

Smith-Rowe's first-team exposure in the Premier League comes following a steady build up of games in cup competitions but he has taken to the top flight with ease and already looks like a key player for Mikel Arteta.

Another assist saw him confidently take on the Newcastle defence before cutting back for Bukayo Saka to score on Monday night and he could be a major player towards a Gunners resurgence in the second half of the campaign.

Frank Lampard spent £250million on his Chelsea side in the summer but right now the academy kid who was already at Stamford Bridge is showing them all up.

With £89million man Kai Havertz struggling at Stamford Bridge, Mount has stepped up to ensure Chelsea's Premier League title hopes remain heading in the right direction across choppy waters with a series of consistent performances.

On Saturday his outing turned into a match winning one, with a fine strike late in the game at Fulham enough to get Blues maximum points in the Premier League.

7. Mohamed Salah (DOWN ONE)

Mohamed Salah's slide down the rankings continue. Another blank in front of goal in the 0-0 draw with Manchester United means the Egyptian hasn't scored in the Premier League for over a month.

The bad news for the Reds is his goal drought has come at the same time as fellow strikers Roberto Firmino and Sadio Mane, which means Salah isn't contributing with assists either following a third goalless performance from the Premier League champions.

It's not quite a crisis at Anfield but it sure is a concern as they continue to concede ground to their rivals in the title race.

Not the best of weekends on a personal level for Jamie Vardy, even though his Leicester City side ran out 2-0 winners over Southampton.

But while James Maddison and Harvey Barnes were firing in the goals, the veteran striker struggled with his seven shots in the game failing to find the net - that's his highest amount without scoring for the Foxes in the Premier League.

A rare off day for the 34-year-old but perhaps an expected one as he has never scored at home to Southampton in seven attempts. That is more than any other Premier League outfit, but it is also four games in a row he has drawn a blank now.

One of the comeback stories of the season has been how John Stones has gone from being on the fringes of the Manchester City exit to suddenly being one of the club's key players.

City's record when he has been in defence this season is phenomenal - conceding just two goals in his nine Premier League appearances, with his back to basics approach to defending being credited with his upshot in form.

Now though he has goals to his game, scoring his first and second Premier League goals for City in their 4-0 win over Crystal Palace making him a pest for opponents in both penalty areas.

Already a sure contender to be Arsenal's player of the season, but even more importantly he continues to look like a top class talent that can lead the Gunners' future.

Saka's 11 goal contributions for Arsenal as a teenager are only bettered by Nicolas Anelka, Cesc Fabregas and Theo Walcott - and the 19-year-old only needs one more to draw level with the latter following his strike against Newcastle.

With a firm on-pitch understanding with Smith-Rowe also looking like it is being established, the best appears yet to come...

Back on top form with his 12th goal of the season and his third in as many Premier League games for Tottenham's talisman, whose well taken strike against Sheffield United steered Spurs towards a 3-1 win at Bramall Lane.

His latest effort also puts him just one goal behind Bobby Smith's 208 Tottenham goals - a tally only bettered by the great Jimmy Greaves.

The England captain is now also just one goal short of Salah in the race for the Premier League golden boot too having gone joint second along with team-mate Son Heung-min.

2. Bruno Fernandes (DOWN ONE)

Manchester United's star man struggled to make much of an impact in the 0-0 draw at Liverpool in an average display - but even then he still nearly stole all three points for the Red Devils.

A free-kick that narrowly flew wide and another effort well saved by Alisson meant he did have chances at Anfield in what was otherwise a more useful point for United rather than the Reds.

It's not enough to prevent him from slipping from top spot in the rankings though, as his relatively quiet start to January comes having won the Premier League's Player of the Month award in December for the second month in a row.

Manchester City may have become slightly more pragmatic this season under Pep Guardiola but the real trick has been managing to still get the same creativity out of Kevin de Bruyne.

There is no David Silva these days to ease the workload but the Belgian continues to keep City's attacks ticking over and he was once again central to their 4-0 win over Palace.

De Bruyne's fine cross for Stones to nod in the opener was his 100th in all competitions for the club and also takes him just one behind Harry Kane's 11 in the top flight this term. His fitness will be crucial if Manchester City are to bulldoze their way back to the Premier League summit in the coming weeks.