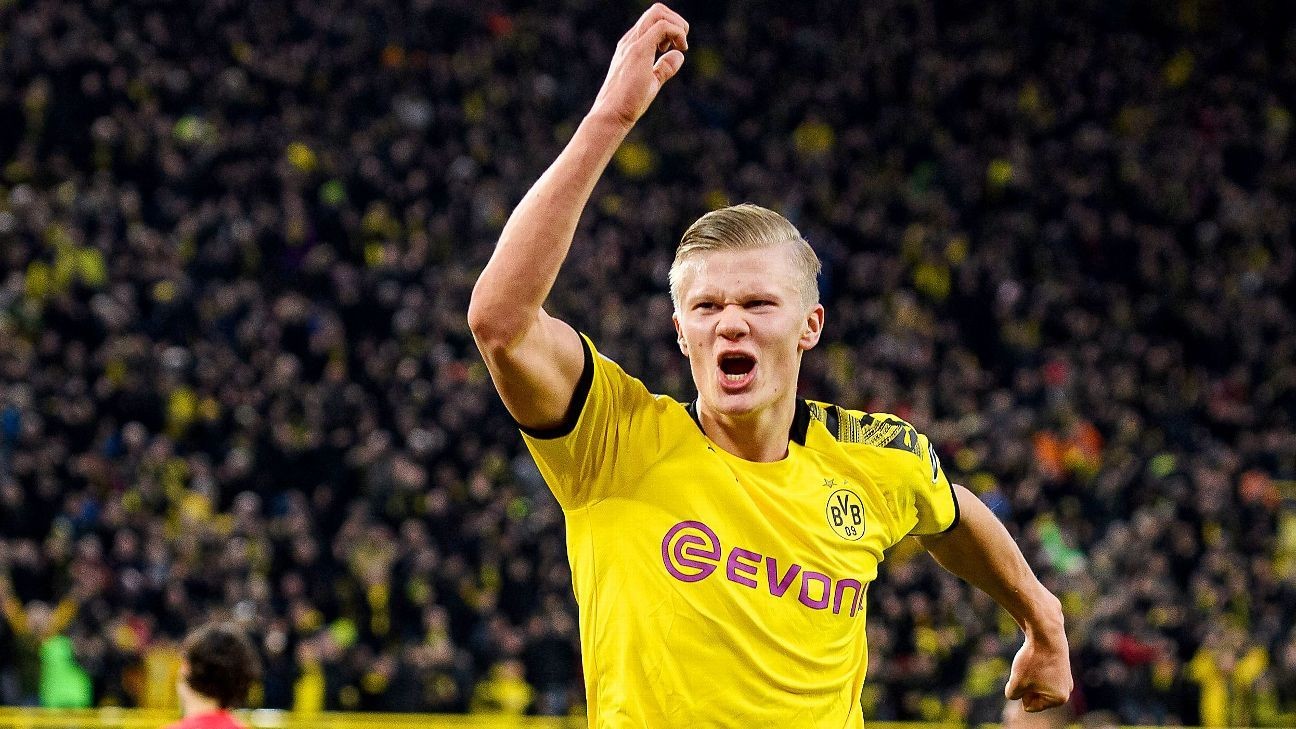 As Erling Haaland closes in on the end of his breakthrough season, another year at Borussia Dortmund will serve him just fine. The Norway international's one-year express journey from a mere talent to a household name in world football is possibly one of the most remarkable stories of the year.

Dortmund's January signing from FC Salzburg hit the Bundesliga like a whirlwind, with nine goals from his first six league appearances; his tally after the COVID-19 break stands at the slightly more humanly comprehensible four from their final seven league outings of the 2019-20 campaign, which wrapped up on Saturday.

While Haaland's early productivity was nothing short of breathtaking, it's worth noting that he slotted into an already free-scoring Dortmund team. Lucien Favre's side had scored 18 goals from the previous six league matches prior to the winter break, and you'd be hard pressed to find a more friendly environment in which a centre-forward could thrive. With the mesmeric attacking movement produced by Jadon Sancho, Thorgan Hazard, Marco Reus and Julian Brandt -- supplied by the most attacking-minded pair of wing-backs in European football, Achraf Hakimi and Raphael Guerreiro -- the spectacular Borussia Dortmund side were hitting a peak. That said, Haaland was by no means a freeloader; he has very much added to the party.

Equally, as Dortmund have hit a slump in form in the past weeks, Haaland's impact has logically diminished. The 2-0 defeat to Mainz at home on June 16 was arguably Dortmund's poorest performance of the season, with the attacking movement, rhythm and cohesion in the last third -- that we have become so accustomed to -- completely absent. Haaland, too, looked out of place and pace and uncharacteristically lethargic, hardly being involved throughout the 90 minutes.

Sources: Inter to sign Achraf Hakimi from MadridBayern's eighth straight Bundesliga title is both incredible and a problemInside Gio Reyna's life at Dortmund: On wild goals, hanging with Haaland and shrinking laundry

Yet perhaps this was understandable with no league title left for Dortmund to chase, Bayern Munich having wrapped up their eighth straight win that same week. Haaland in particular is a passionate player who responds to the situation and, especially, to the crowd. With less to play for and in the absence of the usual 80,000 roaring him on, perhaps it's not surprising that his performances have dipped.

Dortmund's have, too. And however talented the teenager is, he's not a one-man team. Although in terms of skill set and attributes, he is one of the few centre-forwards at the top level who's fully capable of creating opportunities -- and indeed goals -- on his own, even he is still at the mercy of the machinery around him.

In many respects, Haaland's first six months at Borussia Dortmund have been nothing but a huge bonus. While it looked likely that he had the capacity to successfully jump from Norwegian and Austrian football to the higher demands of the Bundesliga, he's shown it sooner than probably anyone expected. He has looked sharper mentally, the breaks he used to take during the games are shorter now and -- despite some fitness issues in the past weeks -- he's increasingly showing the ability to last the whole 90 minutes.

There's no doubt that Dortmund have a plan in mind for the further development of Haaland, and their influence is already being seen. The essence of an enthusiastic, powerful centre-forward who thrives when the game opens up is still in evidence, yet certain technical aspects of his game seem to have improved since his move to Germany. He recently came off the bench to score a stoppage-time winner against Fortuna Dusseldorf with a well-directed header -- his first headed league goal since he left Norway -- and he also seems more interested in, and comfortable at, receiving the ball with his back to the goal, as opposed to his previous tendency of always wanting to exploit space, either wide or behind the defence. Yet his aggressiveness, fearlessness and directness remain the staple features of his game, along with his trigger-happy left foot.

It will be exciting to see how he performs in 2020-21, which, as he has now become an integral part of the Dortmund team, should be his real "kick-on" season. Finally having some stability, after moving in quick succession from Norway to Austria and then Germany, should help his development -- assuming he stays to continue it at the Westfalenstadion. And really, although it's tempting to envisage Haaland pulling on even more famous shirts than the yellow Borussia Dortmund kit, there's hardly any better place for him to progress.

The comparisons with Robert Lewandowski may stop with the position on the pitch and the fact that he, too, was pulled from relative obscurity -- in his case Lech Poznan -- but it's no coincidence that Poland's record scorer made the step from a prospect to the finished article at the same club. Lewandowski, perhaps the defining centre-forward of the past decade, might not have become the same player if it wasn't for the environment of meticulous and cutting-edge player development that the German club has cultivated.

While Haaland's impact might have slowed from "sensational" to "fine" -- at least by the standards one has come to expect from the teenager -- it certainly hasn't wiped the 19-year-old off the shortlists of the eight to 10 high-spending European elite clubs. However, it's clear that €80-100 million -- the amount said to be the minimum for Dortmund to even pick up the phone -- will be harder to come by in the coming transfer windows. Partly because most clubs are still months away from understanding the exact financial harm the coronavirus pandemic has caused throughout the football economy, and partly because the higher end of the transfer market is still affected by bewilderment of what the new reality might entail in terms of transfer value and prices.

In fact, the two most recent "benchmark" transfers at the higher end of the market this summer are Mauro Icardi's €50m move from Internazionale to Paris Saint-Germain -- in which the French giants exercised a buyout option that was negotiated back when the financial climate was less unpredictable -- and Timo Werner's move from RB Leipzig to Chelsea for the same amount, which was subject to a predetermined buyout clause. In other words, neither of those deals were heavily compromised or discounted by the pandemic, as the conditions were already set out some time ago (although Liverpool allegedly pulling out of the race for Werner because of uncertainty about the price might be a sign of the prudence that could affect the market).

Consequently, the chance of Haaland moving this summer is probably reduced to the off chance of a financially stable club seizing the moment of a volatile financial climate to make an opportunistic strike -- both Manchester clubs immediately spring to mind.

Dortmund will hope that Haaland wouldn't yet be tempted by any such offer, and that the incentive to go one better and try to topple Bayern next season will be enough to keep him for at least one more year. However, with clubs also circling for Borussia Dortmund's other stars -- namely Brandt and Sancho -- it could be that if they lose one of them and become less competitive, they could quickly end up losing all three.