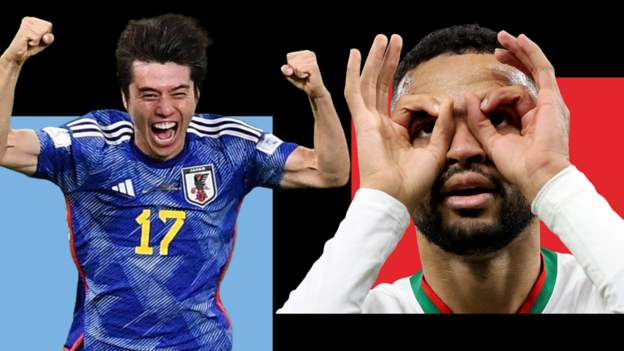 It is becoming obvious that fitness and athleticism are becoming as much a factor in deciding matches at this World Cup as technical ability.

That is one of the main reasons we saw so many shocks in the group stage, although of course the teams who caused upsets also had a very good tactical plan.

For example, the physical output we saw from Japan when they beat Spain and Germany, Saudi Arabia when they beat Argentina, and also Morocco in their win over Belgium, helped them overcome teams who, on paper, had much better players.

You would normally expect to see the more technical side wear the opposition down by the end of games, with more spaces appearing when they tire late on.

In the Premier League, you see Manchester City do that all the time - they scored more goals in the last 15 minutes of matches than anyone else last season.

Here in Qatar, it's been different. The decisive moments from the underdogs have largely come in the second half of games.

They are the ones finishing games strongly, and the new rule allowing teams to make five substitutions instead of three definitely helps.

Football is a squad game now - not just during tournaments but in the middle of matches too.

South Korea's amazing late success over Portugal was another totally unexpected result, but it was no surprise it was a substitute who scored their injury-time winner.

The most important World Cup ever for substitutes

I like the new five substitutions rule, and I think it's the right thing to do with the amount of games now and the intensity of modern football.

Generally, when people talk about it, they look it from the point of view that it only helps the bigger team in this scenario; how it benefits them because they have higher-quality players to bring on - like, say, England do with all of their attacking options.

I think there is more to it than that, because if you are bringing those good players on then you also have to bring someone good off, and the best players are generally on the pitch from the start.

I get that you are still bringing on some fresh legs, but the destructive side of football is a lot easier than creating - and being able to make five changes helps the side doing more defending and running too. In fact, it suits them more.

If your players are tired and have been chasing the ball all game, you can restock the energy in key areas in defence and midfield to ensure your intensity doesn't drop.

It is down to all the coaches to use what they have got on the bench to make an impact, whether it is by trying to be more courageous - like Japan have done twice now - or to maintain your defensive stability.

Making the right changes at the right times is more important than ever, and I think substitutes are going to be more important at this tournament than at any previous World Cup - especially in the knockout stage.

Underdogs are using their brains too

We have seen this wonderful desire from some of the underdogs at this World Cup to give absolutely everything, often in ridiculous heat.

It has shown you can play high-tempo football in any conditions, if you have got the right personnel.

I know they lost in the end, but there is no way Canada should have been dominating this Belgium side. Likewise, Morocco have got some good players, but they could do the same against Roberto Martinez's team because they are so strong physically.

England have some fantastic technical players who are good runners too, but when they played the United States they were up against as athletic a midfield as you are going to see at this tournament.

The whole USA team have so much energy but Weston McKennie, Tyler Adams and Yunus Musah were in the middle of the pitch and at the heart of their plan.

They are all decent players, but definitely not better than England's midfielders - yet they were able to stop them from playing.

I want to make it clear, though, that these teams I have mentioned are not just a bunch of extremely fit headless chickens running around. They are good players, and their success is not just down to them playing at 100mph all the time.

One of the clever things I've seen with some of the sides who have got a surprise result in Qatar is that they know when to have a breather and be compact as a team.

So, while it was Japan's high press that got them back in the game against Spain, and they were still making runs in behind Germany's defence late on in that game, they did both things in spurts rather than for 90 minutes. That is down to the coach.

Will the shocks continue in the knockout stage?

As the group stage went on, I think there was a realisation that teams who have really good physicality and athletes - guys who are really determined - had to be matched.

If you can do that, and equal their work-rate, then your quality comes through - so some of the teams with more technical players altered their approach, although Spain were an exception to the rule.

Spain's midfield is probably the only one in Qatar that relies mostly on technical ability. The two young boys, Pedri and Gavi, can run about ahead of Sergio Busquets, but you wouldn't say they were supreme athletes.

However, everyone else will make sure there is plenty of legs in their team - even Brazil. It's no coincidence that Raphinha plays for them, because we know from his time at Leeds United that he never stops running, and a big part of the reason Richarlison is picked is his work-rate.

So all the top coaches realise the importance of working hard, and the element of surprise that some of the underdogs had early on is surely mostly gone now as we head into the last 16.

Japan are a remarkable team with wonderful togetherness and Morocco won't go quietly either, but I'd expect fewer surprises from now on.

England have had their kick up the backside already, with their draw against the United States. They will have to be careful against Senegal, but I think it helps that they didn't just breeze through all three of their group games. It means they will be ready for whatever happens next.

Danny Murphy was speaking to Chris Bevan in Doha, Qatar