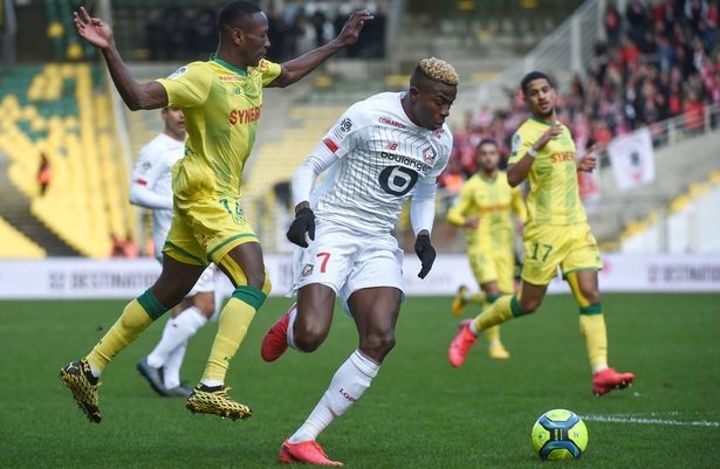 When it comes to identifying stars of the future, few clubs do it better than Lille.

It was with the French side that Eden Hazard blossomed into one of Europe's most exciting players. Nicolas Pepe shone for Les Dogues before his move to Arsenal. Pierre-Emerick Aubameyang, Divock Origi, Lucas Digne, Dimitri Payet, Benjamin Pavard and Idrissa Gueye also enjoyed spells in northern France.

This record of honing young talent is part of the reason Europe's elite clubs often send representatives to watch LOSC matches. Nobody wants to miss out on the next gem off the club's production line.

That's why interest in Victor Osimhen has swelled over the course of this season. Barcelona and Real Madrid have been linked. Bayern Munich, too. Now Manchester United have, according to reports in France, also identified the 21-year-old as a possible target ahead of the 2020/21 campaign.

The striker certainly won't come cheap. Lille supposedly expect a fee in excess of the £72m Arsenal paid for Pepe last summer. That would make Osimhen one of United's most-expensive signings. So is he worth such an outlay?

Rewind 12 months and the Nigeria international was on loan in the Belgian top flight. Injuries had curtailed his progress at Wolfsburg and a bout of Malaria in the summer of 2018 ended interest from Zulte Waregem and Club Brugge.

Charleroi took a chance on Osimhen and it certainly paid off. He struck 20 goals in all competitions and his move was made permanent for just £3.1m. A month later he joined Lille for £11.7m.

Pressure was on the young forward. He had to fill the respective holes left by Pepe and Rafael Leao, who had moved on to AC Milan. Four goals in his first three games proved Osimhen was up to the task.

And he hasn't stopped scoring. Osimhen has 18 goals in all competitions and has also chipped in with six assists. What's perhaps most impressive, however, is how well-rounded his game already is.

He can play as a lone striker yet is equally capable of functioning as part of a front two. He can break behind defences using his pace, he can hold off powerful centre-backs with his 6ft 1ins frame and link play, and can sniff out chances in the 18-yard box.

Osimhen hasn't developed these skills by chance. He's done it by modelling himself on one of the game's greats: Didier Drogba.

“He's my idol in every sense of the term,” he told France Football in November. “The man, of course, but also the player he was. I grew up watching him. Still today, I'm addicted to his videos. In my free time, I go on YouTube, I look at his goals, his whole matches when he played in Marseille, Chelsea, Galatasaray.”

This unwavering desire to make the very most of his talent was forged in his early years in Nigeria. Shortly after the death of his mother, Osimhen's father lost his job. To help ensure the family survived, Osimhen sold bottled water in the middle of the busy streets of Lagos.

“Everything was very hard for us,” the Lille striker told bein Sports in October. “We did not have enough to eat, but now I can give my family everything they want since I became a professional. I've been able to quickly break the deadlock and give them the life they deserve."

It's inevitable Osimhen will leave Lille at the end of the campaign and there's little doubt he could thrive at United. He would fill the hole left by Romelu Lukaku who, despite his weaknesses, offered a blend of physicality and pace in the final third that's been missed.

What's more, United could spend big on Osimhen knowing his form is not simply a flash in the pan. He has averaged 0.51 goals per 90 in Ligue 1 this term, a figure below his expected goals per 90 of 0.58.

What that does show is the Nigerian is a striker who consistently gets high-quality chances. And with experience he will only finish more of them.

United have spent big money in recent years and not been rewarded. But if they pull the trigger on a move for Osimhen, it's likely they will be. And handsomely so.