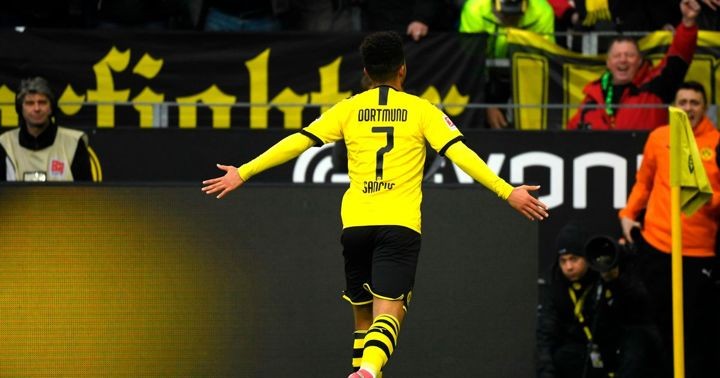 It's a transfer that could shatter Manchester United's record fee and sprinkle some significant star dust over Old Trafford, but could it also be a deal that proves easier to do than many might expect?

Jadon Sancho seems almost certain to leave Borussia Dortmund this summer after another stunning season in the Bundesliga for the 19-year-old and United have an interest in signing the England winger.

Most leading European clubs will have Sancho on their radar at some level, but it may be that the cards fall for United if the London-born speedster looks to leave Germany in 2020.

United's likely failure to land a top four finish and a return to the Champions League - unless they win the Europa League - could count against them, but then the barriers preventing other clubs from firming up their own interest may just be greater.

The sell from United to Sancho's representatives should be simple. He can be a legend at Old Trafford, the world class catalyst in the rebuilding of this squad to challenging for honours domestically and in Europe again. When United are at their best there are few better places to play your football.

As things stand Chelsea are the other club credited with an interest in Sancho, but they completed a deal for Ajax playmaker Hakim Ziyech this week and have other areas to strengthen as well. That might make a £100m+ move for Sancho unfeasible, especially with Roman Abramovich's lavish investment at Stamford Bridge showing signs of drying up as his dispute over visa application with the UK government continiung.

Elsewhere in the Premier League a return to Manchester City looks unlikely, given Sancho left the Etihad for Dortmund under a cloud and his relationship with Pep Guardiola was strained. Liverpool have also been linked with the winger, but their front three looks unbreachable at the moment and Sancho is unlikely to accept a rotation role.

If Sancho favours a Premier League return it may be that United are his most likely destination, but what about competition from the continent?

A move from Dortmund to Bayern Munich is unlikely given his current club will be determined not to strengthen a rival and no Serie A club is likely to be able to afford the transfer fee.

Paris Saint-Germain would have no such issues, but a move to Ligue 1 is unlikely to appeal, so that just leaves the big two of La Liga.

Yet there remain questions marks over the financial firepower that Real Madrid and Barcelona have, given both have significant levels of debt hanging over them and are already managing monstrous wage bills. Departures would be required to facilitate a move for Sancho.

Both clubs also made major investments in their playing squads last summer and may have alternative priority targets for attacking areas, if they do decide to reinforce a position that both strengthened last season, with Real signing Eden Hazard and Barcelona bringing in Antoine Griezmann.

All of those hurdles may well conspire to leave United as favourite for Sancho's signature, with the significant caveat that a lot can change in football within the next four months.

And if United are given a near clear run on Sancho, it doesn't mean that any deal is a given. We've seen in recent seasons that speedy recruitment isn't necessarily a strength at Old Trafford, but if they can pull this deal off it could yet be a game changer.