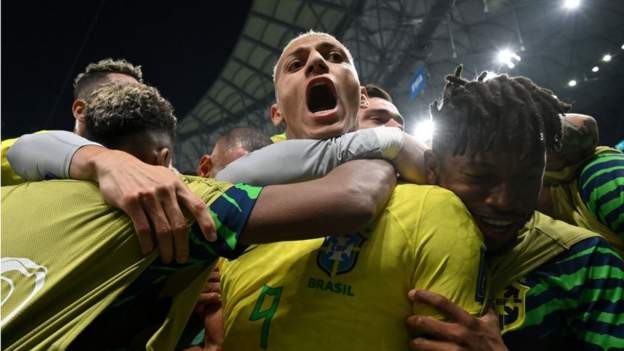 Richarlison may have to justify his place as Brazil's number nine to outsiders but he used his debut on the World Cup stage to demonstrate exactly why coach Tite is unswerving in his admiration.

Tottenham's striker is up against formidable competition for his place in the team in Qatar from the likes of Arsenal's Gabriel Jesus and Rodrygo of Real Madrid, while Liverpool's Roberto Firmino did not even make the journey.

In a squad overflowing with attacking riches, Tite has made Richarlison his first-choice striker to complement the gifts of Neymar and Vinicius Junior, and was the spearhead as the tournament favourites opened with an impressive 2-0 win over Serbia at Lusail Stadium.

Richarlison ended Brazil's frustration in the face of Serbia's massed defensive ranks when he pounced after goalkeeper Vanja Milinkovic-Savic turned away Vinicius Junior's shot just after the hour.

Then real moment of magic arrived, a piece of skill that had the finest traditions of Brazilian football running right through it.

Richarlison's second goal made it nine in his last seven Brazil appearances, further evidence of why he is held in such regard by Tite and making him his country's first player to score twice on his World Cup debut since Neymar in 2014.

He is in some ways a workhorse surrounded by more flamboyant attacking talents, but Richarlison is the complete striker when at the top of his game, offering tireless work rate as well as high levels of skill.

Richarlison has had a stop-start opening to his Spurs career following his £60m summer move from Everton, with injuries stalling his progress, but this was a performance that showed what an asset he is for Brazil and will be for his club side in the future.

Former England striker Alan Shearer told BBC Sport: "He's a man in form in that yellow shirt. He is yet to score in the Premier League for Spurs but for Brazil he is on fire.

"The positioning of Richarlison to pick up those scrappy little goals, the ones where the keeper is going to tap them out in and around the six-yard box, give me as much satisfaction as the incredible second goal he scored.

"He's in the right position. He gets his shot away. Watch his movement. He's first to react as all good strikers are. It looks very simple but it's not. You've got to get in there then finish it. It's very, very good centre-forward play."

Richarlison's match-winning display also added to the weight of evidence suggesting the sheer strength and all-round quality of Brazil's squad makes them favourites to lift the World Cup in this same stadium.

Neymar was busy but quiet overall, and also appeared to pick up an injury, while Vinicius dazzled. They could not make their own breakthroughs but helped Richarlison get the job done to snuff out Serbia's hopes.

Brazil could have added more in the closing stages as Tite made the sort of changes that will have their rivals wincing with jealousy at their strength in depth, introducing Arsenal's Jesus and Gabriel Martinelli, Manchester United pair Antony and Fred, and Real's Rodrygo.

Manchester United's Casemiro showed all his vast experience, hitting the woodwork along with Alex Sandro, while behind them is Chelsea veteran Thiago Silva and Liverpool's outstanding goalkeeper Alisson Becker, who did not have a save to make.

Brazil's army of supporters are always expectant at World Cups and their first game in any tournament carries a touch of sporting theatre. Their yellow shirts flooded the Lusail Stadium before kick-off and were spread all around in the crowd of more than 88,000.

They will be hoping, with good cause, to return to this venue for the final.

If Brazil's players were weighed down by expectation it did not show amid remarkably relaxed scenes as they arrived before kick-off.

When the team bus stopped in the tunnel, members of the squad joined together in a dance before disembarking. When Neymar strolled into the dressing room he was joined by team-mate Raphinha in a samba.

And there was a glorious outpouring of Brazilian joy for each of Richarlison's goals, members of the team and the squad pouring towards the corner flag to swamp the scorer. It was a genuine show of unity and celebration.

When Neymar strolled into the stadium he was sporting a garish pair of shimmering golden headphones. His time will come out here in Qatar - but on this night it was Richarlison who stood out as Brazil's golden boy.